The production of necessity

One of the most powerful thoughts people have is the thought of necessity. It is much more than a thought. The word 'necessary' means 'it cannot be otherwise', and the Latin root means 'don't yield'.
. . .
This notion of necessity is crucial to our whole ordering of thought; as is its opposite, which is contingency. 'Contingency' means 'what can be otherwise'. If something can be otherwise, its [sic] meaningful to try to change it. If it cannot be otherwise, then there's no use trying. This will have a tremendous effect.
~David Bohm, Thought as a System, Routledge, London 1992, pp. 68-69.

This image I stumbled upon some months ago at a myspace page -- no credit listed. 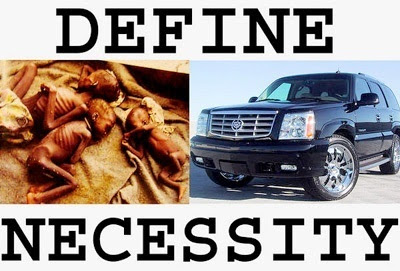 On not thinking too hard

Some time ago, one Jose Garcia from a website called MemeTherapy emailed to ask me a couple of questions for a regular feature entitled "Brain Parade". Here's what transpired -- the questions he posed, and the answers I duly supplied:

Q: Putting aside a comprehensive vision of the future, do you have a single "pet prediction" of something that you think might happen over the next decade or two?

A: I think prediction will be widely discredited for evincing, in most cases, an unsound epistemological stance in relation to "the future" (which should usually be in the plural).

Q: Does the increasing willingness by many people to share private information online suggest a shift an attitudes towards privacy or could it be naivete?

A: Both things are happening. Attitudes are certainly changing, but there's also an element of naivete -- behaviour uninformed by foresight -- at play in our evolving info-sharing habits. Many web users don't yet realise the durability of the tracks they leave behind, and much of what people do with the web is not informed by forethought about how (or by whom) it could later be used. The fact that a large chunk of the adolescent generation is leaving records of its social life online may suggest that many would have to deal with some degree of embarrassment in later life, courtesy of all those crazy party shots archived on myspace. Or it may mean that, with more fragments of people's "private" lives readily available in the "public" domain, the content of what's cordoned off in the name of privacy shrinks (and with it, the causes of embarrassment). Meanwhile, we may also develop more sophisticated strategies for managing our electronic personas, similar to (but on a more modest scale than) the way public figures have people to manage theirs. Main point: the technology changes faster, so the attitudes to privacy tend to be negotiated in response, rather than beforehand.

"Function creep" is central here; info collected for one purpose being used in unanticipated ways later on. An offline example: the increasing prevalence of security cameras (in the city of London it's already reaching Orwellian proportions) makes many fragments of one's daily movements available to the various eyes in the sky -- and this is largely accepted in view of prevailing crime and terrorism concerns. Now, a centralised database automatically tracking individuals throughout the day, using facial recognition, generated simply by joining up separate surveillance mechanisms, might not be so welcome. But as it becomes cheaper to link up, and perhaps more costly politically not to be able to track people, the calculus changes. What may once have been unacceptable could come to be regarded as necessary. So too with online information: what I today share with you personally through my gmail account could soon be trawled as a matter of routine by parties I never thought would access it, if the political climate makes that shift viable.

So, current trends suggest that "naive" use of IT is paving the way for changed attitudes, mostly in the nature of a contraction, to privacy itself. (Interestingly, all technology use is naive in the sense that we don't know what surprises are in store will cast current habits in a different light.) I have heard one senior futurist describe privacy as a middle-class illusion and luxury whose days are numbered. However, it seems unlikely that issues framed as personal or privacy concerns would be conceded on a large scale without a fight, which raises the interesting possibility of a backlash.

Perhaps not surprisingly, my response to Q1 has not appeared in the "Pet Predictions" Brain Parade. But since the feature based on Q2 hasn't yet surfaced (Jose has -- much like me, it seems -- been too busy to post anything substantial since mid-November) I wanted to pick up that thread.

This is partly because I've been puzzled about my own reticence about getting started on this blog again after a break. It's not that I'm not having lots of interesting conversations, stimulating work, and exciting experiences. Quite the opposite -- but writing regularly is a hard habit to get into, and an easy one to get out of. So, appropriately, the most recent post on MemeTherapy as I write this is a Brain Parade around the question "Do You Get Writer's Block?" And I've been thinking, there could be a link between the privacy question, and the writer's block question -- which I wasn't asked, but if I had been, the answer would unfortunately have to be an unqualified "yes" -- and, come to that, the prediction question too.

The connection? I think as a blogger you need a certain shamelessness, or disregard for posterity, in order to say pretty much anything online, in a form that could come back to haunt you many years hence.

I spent most of last summer working at The Long Now Foundation on its still-dormant-but-hopefully-not-for-too-much-longer Long Bets project, which is ultimately about holding people responsible for their prognostications. That is, lots of pundits and commentators make predictive statements for rhetorical (or political) purposes that serve their needs in the moment, but that are forgotten over time. They can thus retain the impressive aura of providing incisive, foresightful analysis without being held to account, because by the time the decisive moment rolls around, their earlier remarks have been forgotten. A memorable example of this accountability principle in action (courtesy of the FAIR website -- Fairness and Accuracy in Reporting) concerned Thomas Friedman's "rolling deadline" on Iraq, which sparked an interesting conversation internally at Long Now in relation to redesigning Long Bets.

For the record, it is my expectation that as smarter, deeper search tools become available, predictive statements will become more readily and more closely monitored, and the abuse of future discourse will be harder to get away with (...sure, you can quote me on that).

Even so, it's become apparent to me that whether or not you're in the prediction business, writing for cyberspace is not the same (from an accountability perspective) as writing in an earlier era. As much as I favour tightening the reins on people prone to abusing the ephemerality of public memory with manipulative or opportunistic prediction-mongering; if you think about it too much (and apparently, I do) it's also a little scary that anything you say can be held against you in the court of public opinion; not just now, but at any future time.

A dark lining inside that silver cloud could be the spectre of an informational variation of the Peter Principle, a scenario in which the most inoffensive, non-risktaking, vanilla-dull people who, by virtue of not doing anything very interesting with themselves, contrive to leave no online trace of political or personal indiscretions; and thus are best able to survive their perilous ascent up the ladder of public scrutiny, because they're the ones who have nothing to hide. (Of course it might be argued that there's more than a touch of this triumph of mediocrity in politics today...)

Maybe the key is not to think too hard about what you write, lest you fall prey to the paralysis of excess self-consciousness and karma vertigo; not to be perturbed by the cliches that crowd onto the blank slate before your eyes... (thanks to Jake Dunagan for a nice image that goes meta on writer's block).

Although I'd like to say I have the best interests of future generations at heart, I can't really claim to know what those are. An innocent and progressively well-intentioned remark today could be the stuff of Michael Richards and Mel Gibson levels of embarrassment in years to come!

So I'm blogging for today. And today, that's enough.

Welcome back to the sceptical futuryst.
Posted by Stuart Candy at 11:42 pm No comments: