An experiential scenario for post-revolution Tunisia

Overthrowing a dictatorial regime is a staggering feat of popular imagination and courage.

But what about the morning after the revolution? Everyday life is bound to be something of a let down.

After recent epochal events in Tunisia -- the so-called Jasmine Revolution (or the Sidi Bouzid Revolt, as it's known in the Arab world) in which President Zine El Abidine Ben Ali was ousted -- an astonishing but so far largely unknown coda was the galvanising role played by a transmedia experiential scenario campaign, spreading a near-term vision of a prosperous and democratic country worth getting back to work for.

This story comes from a local ad agency, Memac Ogilvy Label Tunisia, that has just won gold in the 'Integrated' (i.e. transmedia) campaign category of the Dubai Lynx Awards which recognise excellence in advertising in the Middle East and North Africa:

Tunis, January 14th 2011. Tunisians put an end to 23 years of brutal dictatorship. It was a moment of intense hope. But we were all too soon brought back to reality. The entire country went on strike and economic activity was soon left to a standstill. … We needed to find a way to encourage the people to get back to work and start rebuilding the country we had all fought for. … So we decided to show everyone how bright our future could be if we all started building it now. … During a whole day, the media acted as if it were June 16th 2014 and presented Tunisia as a prosperous, modern and democratic country. … The media content spread to social media via 16juin2014.com and people began to imagine wonderful futures and called everyone for action. #16juin2014 hashtag was n°1 top trend topic on Twitter all day long. At 6pm, the debate was everywhere on TV, radios, blogs… Getting back to work quickly became an act of resistance.


Digging into the details becomes slightly tricky if you don't understand French (I do, sorta) and Arabic (I don't), but elements of the '16 June 2014' campaign can be found online. For example, there's a downloadable four-page future-dated issue of La Presse de Tunisie, which invites comparisons to the wonderful New York Times Special Edition from a few years back. 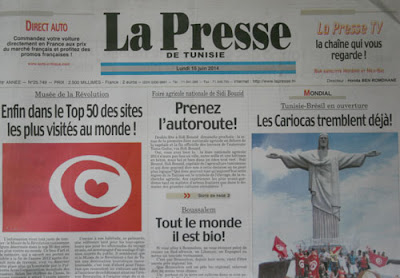 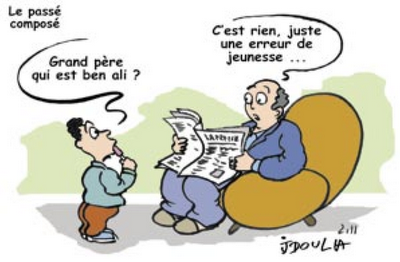 Political cartoon (front page, below the fold):
'Grandad, who is ben ali?'
'Oh, just a mistake of youth...' 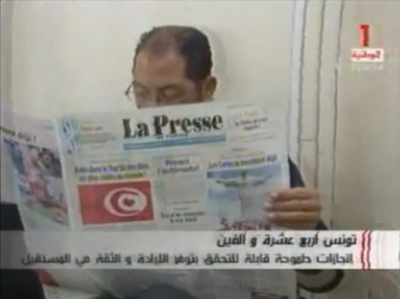 Screenshot from news report on the intervention

Another example: at the moment, the 16 Juin 2014 website centrally features an in-scenario news report about a "Shopping Festival" (as I learned by auto-translating the video title from Arabic) in the west-central town of Kasserine, including what appear to be interviews with prestige fashion figures Giorgio Armani and Marc Ecko. Considering the chaos and brutality unfolding in that agricultural town just weeks before this campaign rolled out in mid-February, we can start to apprehend just how bold a notion this is. (I'm put in mind of the 'Darfur 2020' poster we've discussed here previously, which plays on a similar incongruity.)

I'm thoroughly impressed with the scope and vision of this campaign, which heavily underlines the world-shaping potential of the arts and technologies of narrative, applied prospectively.

While it could be said to raise some deep questions about the current reception as well as long-term viability (not only in Tunisia, but also elsewhere) of this particular genre of political and economic vision as an answer to the people's woes, I don't know remotely enough about Tunisia's current situation to comment cogently on the impacts and merits of these particular stories at the moment -- although I'm very curious to hear from anyone who does.

Meanwhile, those with ideological concerns about the character of this vision can take comfort from the fact that the campaign actively invites people to contribute to the conversation. The top banner on the website reads, 'Participate -- what are your ideas for the Tunisia of tomorrow?'

In any event, I am just delighted to find out about this. Conceptually it's among the grandest and most inspiring of imaginable applications for journalistic future artifacts, transcending conventional advertising to approach something I've been harping on here for years -- the possibility of a hybrid practice of politics, design and foresight, whereby we manifest for ourselves, in vivid detail, those scenarios diagnosed as most necessary to catalyse desired social change.

(* Broken video link fixed 11nov18 // Thanks @dabitch for the post over at adland.tv featuring the above video, and @justinpickard for passing the link along!)
Posted by Stuart Candy at 10:13 pm No comments: