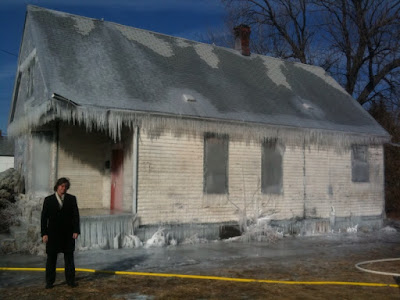 A city in suspended animation
Photo by Jerry Paffendorf | Backstory
In late January I was honoured to speak at Cranbrook Academy of Art in Bloomfield Hills, Michigan, as part of their spring lecture series in Critical Studies. In the arts world the Academy is apparently regarded as "the cradle of American modernism", associated with art and design luminaries (who seem to come in pairs) including father and son Eliel and Eero Saarinen, Ray and Charles Eames, and more recently, Mike and Katherine McCoy. Cranbrook's beautiful and historic campus lends itself particularly well to being strolled or driven around on crisp snowy evenings, but its toney neighbourhood lies just 15 miles from downtown Detroit -- currently an American byword for urban blight -- making it an especially interesting vantage point from which to contemplate alternative futures. Which is what we did in the lecture.

Called "Fragments of Possible Worlds: The Art and Design of Experiential Scenarios", my presentation encouraged the audience, mostly Cranbrook students and faculty, to consider the resemblance between the role of the artist and that of the futurist. What the two have in common, as I see it, is the vocation of enabling new perceptions. Compared to the artist, whose self-understanding frequently seems to include a studied refusal of the constraints to which many other kinds of work are subject (viz. "artistic licence"), the futurist's role may be somewhat more circumscribed, especially in a consulting setting, by the client's needs. But the general role is fundamentally similar. And, while there is a conscious turn towards public and political engagement in my recent work, compared to the more narrowly targeted, strategic use of foresight as used in organisational settings, this common ground shared by art and futures is well captured by the elegant phrase of Royal Dutch/Shell scenario planning pioneer Pierre Wack: "the gentle art of reperceiving".

In the lecture, I outlined the development of experiential futures work I've been doing since 02006 or so, and provided an argument for collectively making our thinking about futures more affective, immersive, and experiential. (I relish exploring this topic with artists and designers because they tend to understand it, and are able to use it in their work, immediately.) Actually, the recent histories of two American cities were sufficient to get the point across: in 02005, New Orleans was devastated by Hurricane Katrina and the ensuing consequences of failing to internalise and act upon the entirely predictable (indeed, predicted) disaster. The other example was Detroit itself, which, notoriously, has endured a slower but no less grotesque disembowelment with the failure of the expected (US automobile industry-driven) future, and of the city to reinvent its dream accordingly. More on that in a moment.

While at Cranbrook I also held an introductory futures workshop for the 3D Design department, which is run by Scott Klinker, with whose work I had become familiar through Bruce Sterling's Shaping Things -- a visionary and gratifyingly short manifesto about spimes, in which he acknowledges Scott's formative influence on the design ideas therein. (Note that in 02007, they did an intriguing talk together at Google about "The Internet of Things: What Is a Spime and Why Is It Useful?", video of which can be found here.) At the start of the workshop, I had the 3D Design students generate a list of design activities, products and industries to which they expect or hope to contribute during their careers. Then I invited them to spend some time in four alternative futures for the US and the world, around 30 years from now, and to begin considering how those various products or industries could be affected in each scenario.

Despite significant structural similarities between design and futures thinking, as usual it was clear that the participants' expectations for their professional lives were firmly rooted in present assumptions, rather than in awareness of various ways in which these might be comprehensively overturned during the next three decades of change. (I don't mean to pick on anybody here; among people who have not been exposed to futures studies -- that is, almost everyone -- presentism and monofuturism are pretty much ubiquitous.) For instance, what would the role of a designer be in a post-collapse economy? How about in a world where Open Source designs can be selected online, then fabricated on the spot by a black box in the corner? The students seemed fully engaged, and asked great questions, and I'm looking forward to seeing how these ideas may begin to find their way into the work. As is often the case, my only complaint was that our time together was so short.

Overall, I found Cranbrook, the sole graduate-only art school in the United States, to be an extremely interesting place. It educates aspiring artists from around the country and the world in any of ten disciplines, from metalsmithing to architecture, each one of which has a small cohort of around 15 students, making for a total of just 150. Each department is overseen by an Artist-in-Residence, who, given the intimate scale of the programs, can exercise great latitude in running his or her own show. There are no conventional syllabi and no compulsory classes. Students are minimally scheduled, but enjoy the close attention and tutelage of their department's artist-in-residence, as well as the social and creative comradeship of their peer group. So the role of guest lecturers, Academy Director Reed Kroloff told me, can be significant insofar as they provide an opportunity for to develop a conversation around themes transcending the differences across the departments.

Here's where the fact of my visit and the topic of my talk intersect. The kind of academic and artistic freedom with which Cranbrook is blessed is a precious, Arcadian rarity. It is just far enough from the woes of Motor City that the temptation to remain safely cloistered must be great, yet being so close affords an important opportunity -- some would say responsibility -- to use its privilege and status to help lead a much-needed conversation about reinventing the region beyond its postindustrial malaise. During my own short stay, the city impressed on me a sense of suspended animation, a place holding its breath, poised between energetic reinvention and the terrifying momentum of continued decline. However things go next, Detroit's predicament as a semi-abandoned, deindustrialising city appears to strike observers as resonant, even prophetic, for the United States at large. Much has been written about the city's socio-economic downward spiral and the paradoxical potential this brings with it for renewal. Articles from just the last couple of weeks include The Guardian and Fast Company, joining earlier pieces in Time, Fortune and the Financial Times. I haven't yet found an adequate treatment of the failure of foresight in Detroit's unravelling, but that aspect surely warrants investigation -- and beyond that, active forward-looking intervention, for those able to offer it. Detroit is not, in the first instance, merely fodder for journalistic curiosity. Like any other community, it is a human work in progress, and an important role of futures for a community fallen on hard times -- like the role of art -- is to enable new perceptions and potentials, helping the next chapter to unfold along a different, more hopeful path. In particular, when futures and arts unite, to create and distribute "fragments of possible worlds", it seems to me that their joint resources hold out the promise of an unprecedentedly vigorous, vivid public discourse of possibility.

In line with the above, I couldn't leave the city without checking in on fellow futurist Jerry Paffendorf, who is putting his entrepreneurial zeal to good use in a fascinating and playful project called Loveland, in which Detroit real estate is sold online by the square inch, serving as the basis for a mixed-reality social network. Since my whirlwind visit, he has been profiled on NPR (that's National Public Radio, USA): excellent news!

Ventures like Jerry's are part of efforts, here and there, to rekindle the city's collective self-imagination; a tremendous challenge, but a worthy one, and it would be marvellous to see Cranbrook assume a leading role in broadening the conversation. (On that note, the extent to which artists and craftspersons can or should remain detached from the fate of their communities could make an excellent topic for another lecture in the Critical Studies series.) For the time being, though, I want to say it was a real pleasure to introduce futures thinking to this attentive and thoughtful audience, and I trust this will not be the Academy's last official foray into futures.

My thanks to Cranbrook's Sarah Turner and Sid Deaghlin for handling the logistics of my visit, to Jerry Paffendorf for his kind hospitality during a whirlwind city tour.