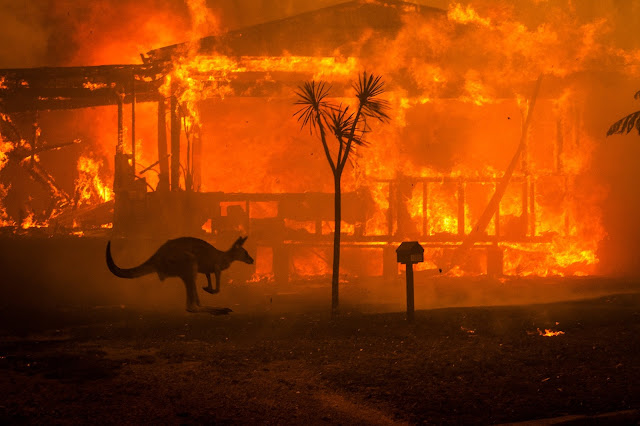 Photo by Matthew Abbott for the New York Times

I wrote this piece in the first week of January. It appears in the just-published Summer 2020 edition of Design Journal from the Smithsonian Design Museum, Cooper Hewitt, in New York. It’s hard to believe how long ago the start of this year feels, and how quaint my obliviousness, stuck in amber, to the string of crises that have unfolded since — the COVID-19 pandemic, oil market chaos, historic levels of unemployment, and in the past week, demonstrations across the United States. Our context has shifted again and again, but I think the argument is reinforced by all this change.

A small coastal town in Australia has become a household name in the past twenty-four hours, besieged by raging bushfires colouring land and sky a surreal martian red, and causing residents to flee for the ocean, the safest refuge in a world aflame.

Today, under unprecedented emergency orders from the Prime Minister, the navy arrives to help with evacuation. The fires in Eden and dozens of other places have already torn through an area the size of Switzerland.

This is all a few hundred miles northeast of where my wife and I, both Australian, are on our annual pilgrimage back from the United States. Right now our family group is standing on the deck of another navy vessel, a World War II minesweeper, long ago decommissioned and turned into a small maritime museum. Normally the backdrop would be a spectacular Melbourne skyline. Instead we see a grey curtain that looks like fog, but isn't. The smell of smoke is unmistakeable. The ongoing catastrophe is at once bodily present and utterly remote from our pleasant after-lunch walk.

A museum guide leads us to the crew quarters, pointing out a framed black-and-white photo of grinning sailors crammed into this space. I try to picture daily life during the war: dozens of servicemen eating, arguing, and playing Mahjong endlessly, spending their nights in hammocks strung from the low ceiling. The central purpose of the exhibit is of course to help visitors connect to this earlier time - but even standing here, surrounded by historical paraphernalia and listening to stories from our knowledgeable guide, one struggles to imagine the lived everyday reality of a vanished era.

As with the present-day experience of others, especially in circumstances very different or distant from our own, so too when it comes to history. Considering it from afar is one thing; really comprehending it is another.

Thinking about the future confronts this same problem, intensified. No one knows exactly what the future holds, so unlike the past or present we have no direct evidence to compare with what is in our minds.

Yet the collective task of properly engaging alternatives is among the most important we face. Fortunately we now have more effective ways to do it than ever before.

Prompted by the Second World War and the Cold War that followed, a pragmatic set of approaches for navigating large-scale change and uncertainty has arisen over the past few generations. The near-unthinkable stakes of nuclear conflict forced governments to develop big-picture "what if" scenarios, and investigate how they might influence events toward preferred futures, and away from nonpreferred ones.

In the 01970s, oil companies and other organisations started exploring the advantages of an institutional capacity to think ahead. Parallel to these developments in the corridors of power, a more grassroots and humanistic tradition of futures workshops and education was also emerging, studying the "images of the future" held by individuals and groups, and how to understand, critique, and create them.

"Future" singular became "futures" plural. A new transdisciplinary field was born, known variously as strategic foresight, futures studies, or simply "futures." Now, paying intellectual attention to possible futures is a positive step, but it does not in itself guarantee an appropriate impact on present-day decisions. The bushfires blazing in southeastern Australia are a case in point. They have captured global attention as a kind of postnatural disaster: something long foreseen, and shaped directly and indirectly by collective choices, but for years not taken seriously in a political sense. This long-fuse, seemingly far-fetched scenario, well outside of anyone's lived experience, has now burst forth and is wreaking havoc in real time.

How then can we connect to possible, probable, and preferred futures viscerally, such that they feel real enough to make a difference, now? This vital question has become a focus for a community of practice building on foresight's foundation. At conferences and festivals, in classrooms and city streets, we are learning and using whatever it takes to bring futures to life, from physical artifacts, photo illustrations, and videos to online games and simulations, street art, guerrilla interventions, immersive theatre, and live-action roleplaying. In recent years in the design world, speculative design and design fiction (an analogue to science fiction, but oriented to physical rather than literary creations) have surged to prominence.

This whole array of strategies is called experiential futures. If one wants to bring potential realities to life, and have them register with the body and make a dent in current choices, then all experiences that help achieve that are part of this design space. They can be used to explore any question or topic, bring any world to life. Here are a few examples of projects we've done on the themes at hand:

For the International Federation of Red Cross and Red Crescent Societies biennial strategy meetings, future artifacts dramatised a potentially changed landscape of humanitarian need. What if displaced coastal populations began to mobilise politically, across culture and language barriers, around their common plight?

For the World Bank's Climate Investment Funds, and Institute for the Future, we imagined far-reaching changes in the US federal response, creating a future advertising campaign around it. What if, in the late 02020s, climate inaction gave way to large-scale military mobilisation? Strange echoes now of the deployments just announced in Australia.

For the Hawaiian state legislature, to support public engagement with a sustainability planning process, we placed hundreds of policymakers and constituents in a quartet of parallel immersive scenarios for the islands, set in 02050. In one room, governance had been restructured around precolonial values and traditions; in another was a naturalisation ceremony for climate refugees. And so on.

These are not predictions, but "what ifs" in four dimensions, aimed at improving the quality, accessibility, and impact of futures conversation. Miscellaneous approaches are coalescing into a systematic set of ways for humans to play productively with possibilities, and ranging beyond the standard technological questions by bringing life to often neglected social, cultural, economic, and environmental dimensions.

Becoming common practice brings the opportunity for deep impact. As well as spending time in the imaginary worlds of comic book heroes, for instance, we might spend time in potential future realities. We might debate and decide less on the basis of ideology and slogans, and more on the basis of collectively explored pathways and policies designed to shape them.

The museum has emerged as an indispensable platform for helping these developments along. If you haven't already encountered a major hybrid design/futures exhibition, at an institution like the Museum of Modern Art, New York, or the Victoria and Albert Museum, London, chances are you soon will. New facilities - essentially cultural institutions of foresight - like the Museum of Tomorrow in Rio de Janeiro, the ArtScience Museum in Singapore, MOD in Adelaide, and the Museum of the Future under construction in Dubai, have lately been established to let visitors encounter what could come to be, as much as what has been.

Museums have always enabled the cultures they are embedded in to remember what matters; but memory and imagination are two sides of one coin. In a volatile era, we need all the help we can get to bring both into currency. What of the past should we hold on to - but also, how might things be otherwise, in better and wiser times to come, and what role can we each play in finding our way there? The rise of experiential futures is fueled by cultural need, and though the need is different everywhere it shows up, it shows up everywhere.

An important societal transition is just getting underway. Collections of speculative future artifacts are a promising start, but wider horizons of experiential futures - immersive, generative, participatory, and large-scale - remain to be explored, growing the collective capacity for foresight through our cultural institutions.

Today, Eden is burning. As the smoke clears, this moment will pass from headlines into history, a newly minted past to learn from to the best of our ability. Already apparent among its lessons to take to heart is our urgent need to get much better at thinking and feeling through what might lie ahead, too.

The good news is: we can.

A full-text PDF of the article can be downloaded here. This Design Journal issue also includes contributions from climate and science writer Tatiana Schlossberg, Native Renewables executive director Wahleah Johns, and atmospheric scientist Katharine Hayhoe, and it can be found in its entirety here. My thanks to Pamela Horn for the invitation to contribute.

Related:
> Always Tomorrow Now, an interview with the Curator of the Museum of Tomorrow, Brazil
> Experiential futures in The Economist
> Ghosts of Futures Past
> Experiential Futures: A Brief Outline
> Integrating Foresight at the World’s Largest Humanitarian Organisation, a forthcoming piece on experiential futures at the international Red Cross/Red Crescent; this project was also discussed in a recent interview for IFTF's Foresight Talks (video)
Posted by Stuart Candy at 10:46 pm No comments: