It was part of a large collective effort mounted by the international futures community late last year at UNESCO (United Nations Educational, Scientific and Cultural Organisation).

The Global Futures Literacy Design Forum took place at the organisation's headquarters in Paris and consisted of more than two dozen "learning-by-doing labs" curated, organised and facilitated by top futures researchers, teachers and practitioners from Oxford to Jamaica.

The event was open to the public –– I'm not sure of the final number of attendees, but some 600 folks registered –– and was explicitly aimed at demonstrating, celebrating, and extending futures literacy humanity’s capacity to imagine and use the future(s) in all sorts of contexts, for all sorts of purposes.

I was also involved in another session; Imagination and Creativity: Gaming the Future of Migration and Climate Change together with my fellow futurists John Sweeney (Qazaq Research Institute for Futures Studies), Anisah Abdullah (Strathclyde Business School), and Daniel Riveong (Futures Centre).

Thanks to the head of futures literacy at UNESCO, Riel Miller, I've collaborated with the organisation several times before, and I was excited when he approached me last year about the Forum.

Its key objectives were institutional on the one hand and disciplinary on the other: "One is to prepare the ground for a UNESCO Ministerial Summit on Futures Literacy in late 2020 by showcasing and refining a range of already proven techniques for integrating Futures Literacy into government activities. Two is to build awareness and networking related to the development and diffusion of Futures Literacy."

Here's the description of the our workshop on 21st century divination techniques that appeared in the event catalogue:


One of the greatest human foibles is our ability to find patterns in just about anything, imagining that random phenomena carry meaning. Might that trait, technically known as apophenia, also be one of our greatest gifts? In this experimental workshop – prototyped especially for this occasion by conceptual artist Jonathon Keats and experiential futurist Stuart Candy – participants are invited to re-visit ancient modes of divination and also to devise some new ones. Simultaneously playing with and against tradition, our aim will not be convergence and prediction, but to generate new and diverse possibilities for action by collectively exploring and exploiting some of our most powerful psychological quirks.


A note of personal context here: legitimate futures/foresight practice is at times misunderstood as or unfairly conflated with a kind of charlatanry. I've generally aimed to avoid adding any fuel to that fire by eschewing anything that smacks of soothsaying –– tarot, tasseomancy, astrology, and so on (well... except for this one time at Burning Man, when I agreed to play the Oracle... but that's another story).

The low level of futures literacy in the population at large often finds people projecting trope-riddled preconceptions and prejudices about what a futurist's job entails, and particularly assumptions revolving around a misplaced obsession with prediction, and it's already challenging enough getting people to engage seriously in thinking about possible futures without playing into their most unflattering assumptions.

However, I recognise that it's also possible to protest too much, and get trapped by personal policies that can become too rigid. So when Jonathon, a superb conceptual artist, experimental philosopher and writer whose work I've admired for years, proposed a collaboration around exploring the possibilities for 21st century divinatory practices, the spirit of his curiosity –– avoiding wild-eyed faith on one side or blanket disapproval on the other –– got me interested. I took a step towards getting over a long-ingrained aversion. As he pointed out to me in one of our pre-event design conversations, the air of suspicion, and even demonisation, that attaches to these practices in post-enlightenment Western culture might usefully be taken as a cue not to avoid, but to be curious about, what we're collectively avoiding or denying.

Jonathon and I are currently working to bring the process to other participants in other locations, so I won't say too much here in terms of workshop detail, but I think it's worth adding, as COVID-19 spreads around the world, that even those of us who have spent decades helping to prepare organisations for inevitable surprises, are challenged to reckon with the question of how effective, or otherwise, our efforts have been.

It seems about time for a dramatic, collective rethink of how we engage with future possibilities. 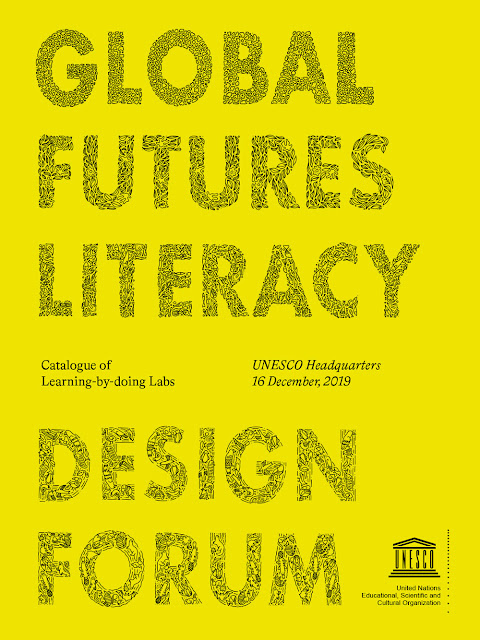 The full catalogue of UNESCO's Global Futures Literacy Design Forum is available in English and in French, and a range of additional videos describing other programs at the event can be found here.

Related:
> Barbershop Futures
> Transforming the Future
> La Chose du Futur à Paris
> Where Do You Stand?
> Using the Future at NASA
> When Reality Outruns Imagination (Coral Cross)
> On Playing the Oracle: Foresight 101 at TEDx (video)
Posted by Stuart Candy at 11:55 pm No comments: