Journalism from the future 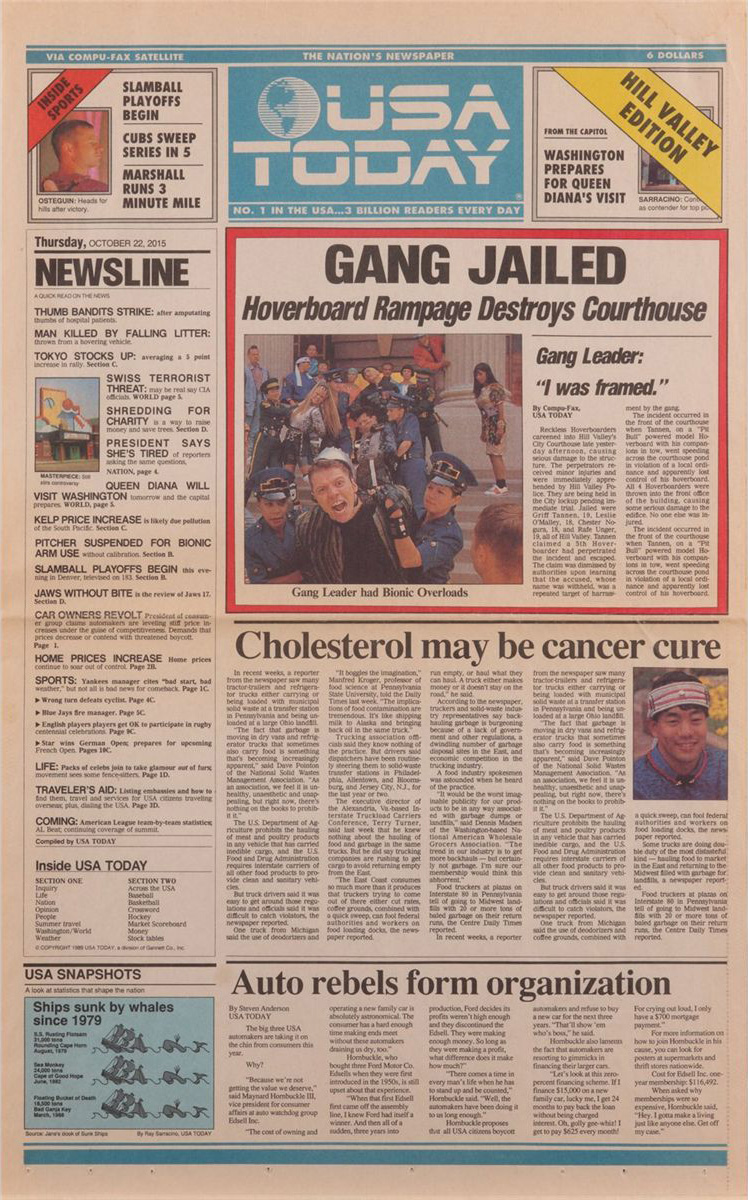 I recently joined the advisory board of a startup called Scout, a crowdfunded project out of Seattle that's "accelerating the creation of a better future through stories, conversations, and prototypes". In other words, the initiative is about developing a platform combining journalism and science fiction. A discussion with Scout's co-founders Berit Anderson and Brett Horvath about how those two traditions come together reminded me of something I've been meaning to share here.

Every now and then, there surfaces a piece of writing that uses the formats and tropes of nonfiction reportage to explore a future scenario diegetically. Such writing can dramatise a point of view on the future(s) to great effect. To say it's diegetic means that it's framed "from" or "within" the hypothetical, as opposed to the more common, and literal-minded, mode of explicit speculation about what could or "will" happen from the vantage point of today.

Conventional prospective or speculative journalism holds the future at arm's length, pontificating. Diegetic reporting actually goes there. It's journalism's version of the "artifact from the future".

Now, scenario writing for formal foresight processes often uses a similar communicative gambit. Still, I find it refreshing when real journos and writers use their skillsets and bully pulpits around the mediascape to tackle this territory. Not to denigrate the efforts of *cough* well-meaning futures types, but when a writer has mastery of those forms and genres which authoritatively mediate developments in the wider world (or seem to), it gives an enormous boost to their readers' capacity to entertain a hypothetical context.  This can range from breaking-news reports to long form historical analysis. In any event, part of what makes future journalism tick is the same thing that can make asserting possibilities in materiality so effective: it brings the future to life.

Another vector to this post comes from The Economist, which a few months ago launched The World If..., a welcome (nay, overdue) effort from a mainstream media brand to systematise some kind of imaginative engagement with possibilities. But in selecting the format they missed a big opportunity. Instead of using their own journalistic idiom to perform future events and analysis, compellingly demonstrating to readers the cultural, commercial, political and strategic implications of each "what if", the articles peer at the possibilities from an armchair planted firmly in the present.

So for those occasions when scenarios are best communicated in writing, we should seek to get a better handle on what works, and why. Below is a starter list of diegetic "journalism from the future" articles. What could be called "future longreads" are starred. *

By the way, let us distinguish what's covered here from a cloud of related approaches which deserve examination elsewhere:
- Newspapers from the future: a classic, even clichéd way to mediate a future scenario, but with good reason. Cases range from the Yes Men's brilliant 02008 real-world intervention The New York Times Special Edition, to Near Future Laboratory's recent paper about the future of football, to the famous prop in Back to the Future Part II [as per the pic at the top of this post; and while it's true that this isn't exactly an example of what this post is about, BTTF Day was just recently – so there we are].
- Scenarios: Stories produced by futurists specifically for strategic conversation-prodding purposes often incorporate diegetic, and frequently first-person, accounts of future events. Like this.
- Future headlines: These are a staple of shorthand scenario-writing (see Ogilvy and Schwartz, Plotting Your Scenarios, p. 9).

- Video/audio news reports: there are a lot of these around, the main lesson of which to date appears to be that they are super hard to do well. The best might still be Orson Welles's brilliant 01938 War of the Worlds radio broadcast, which is very nearly an experiential scenario (it's discussed at length in terms of its effectiveness and ethical calculus here, pp. 272 ff).
- Diegetic future documentary: see here.
- Entire books framed as documents of a future or alternative present: a favourite example, offhand, is Michael Crichton's Andromeda Strain, the verisimilitude and plausibility of which are bolstered with in-story textual artifacts such as scientific journal references. Five centuries earlier, Thomas More's Utopia did something similar (see here pp. 266-267).

Kate Aronoff, The Intercept
With a Green New Deal, Here’s What the World Could Look Like for the Next Generation†
Set in 02043 (published 02018)

† Note: This piece illustrates a fairly common halfway measure, starting with a future vignette then reverting to present-day analysis. (Frum's article below is similarly structured.) This particular example is notable because it went on to inspire a widely-viewed "video from the future", narrated in the first person by Congresswoman Alexandria Ocasio-Cortez.

Rebecca Solnit, TomDispatch.com
* The Age of Mammals: Looking Back on the First Quarter of the Twenty-First Century, 02026 (02006)

David Wasserman, FiveThirtyEight
You’ll Likely Be Reading One Of These 5 Articles The Day After The Election, November 02016 (October 02016)

This is a stub; no doubt there are many more instances around. I'd be happy to add (and credit) suggestions that readers may share.

Related:
> A history of experiential futures
> Death of a President
> The New York Times Special Edition
> Video reports from the future
> Four future news clips from MIT
> Humans have 23 years to go
> The Future of Church
> Foresight is a right
Posted by Stuart Candy at 6:24 pm 1 comment: