A climate of regret 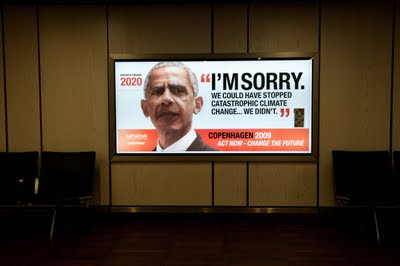 An older, sadder Barack Obama looks back on the Copenhagen climate conference
Today marks the beginning of the United Nations climate conference in Copenhagen, COP 15. As delegates and media converge on the Danish capital, they are being greeted at the airport by a strange sight: environmental advocacy groups Greenpeace and TckTckTck have created a series of billboards depicting various world leaders ruefully looking back from the year 02020, having not seized their opportunity in 02009 to commit to decisive cuts in greenhouse gas emissions. 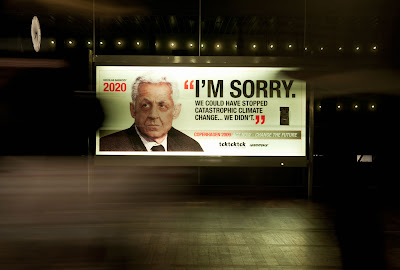 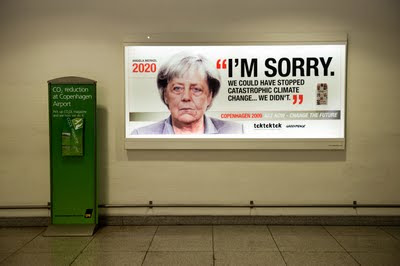 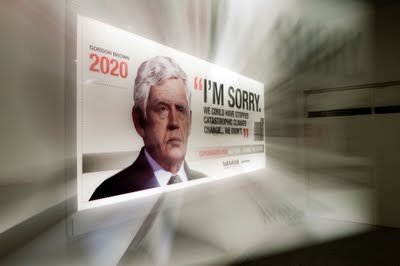 British Prime Minister Gordon Brown. Only older. And sadder.
Each is emblazoned with the same message. "I'm sorry. We could have stopped catastrophic climate change. We didn't."

In case you haven't been following the news (say, you're writing a doctoral dissertation or something), Planet Green has posted a helpful, brief overview of what's at stake in Copenhagen. Meanwhile, Greenpeace Climate Rescue Weblog explains this last-minute campaign to engage the emotions of decision-makers:

We're hoping these ads predict the wrong future -- the one where world leaders look back with a "coulda, shoulda, woulda" attitude at a Copenhagen climate summit which failed. There's still time to change the future. Our recipe for world leader regret-avoidance is simple: agree a fair, ambitious, and legally binding deal to save the climate.

Anyway. While it is not clear to me whether the busy itineraries of all or any of the high-profile individuals concerned will afford them a glimpse of their future selves -- which would make this really interesting -- over 15,000 people are expected to attend (source: CNN), and no doubt many of those will be passing through Copenhagen Airport.

So it's an ingenious and valiant attempt to make the climate message personal; here's hoping it makes some difference.

[[All images from Greenpeace, via Osocio; see also COP 15 set at Greenpeace's Flickr photostream. Sad, old versions of the leaders of Russia, Poland, Brazil, Spain, and Canada are also part of the set.]]