From Canberra to Currumbin, and beyond, Australia's spatial strategy for governance could be very different in the future from what it is today... 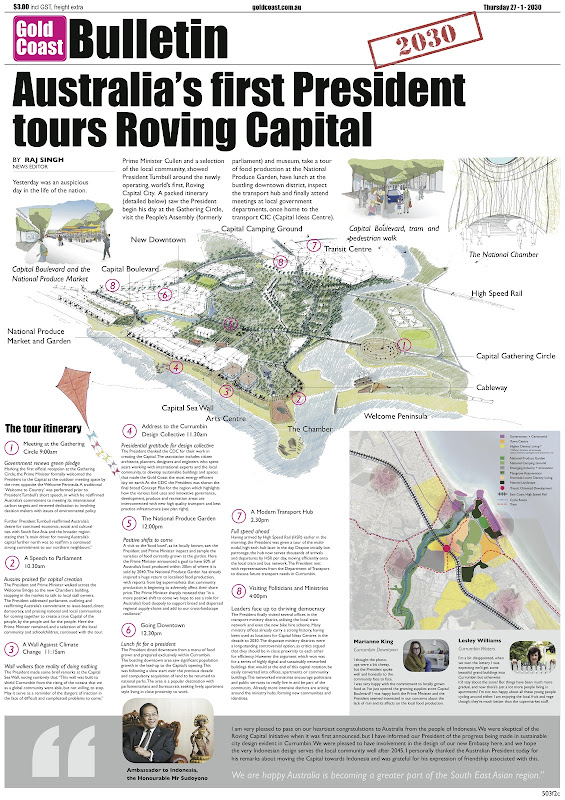 The year 02013 marks the 100th anniversary of Canberra, Australia's famously planned capital city. Its location, decided in 01908 (seven years after federation), was a compromise between perennial rivals Melbourne and Sydney. An international design competition for the layout of this seat of the newly minted nation was launched in 01911, and in 01913, the submission of Chicago-based husband and wife architect team Walter Burley Griffin and Marion Mahony Griffin was selected. The name Canberra, which comes from the word for "gathering place" in the local Aboriginal language, was given in a ceremony on 12 March that year.

A century later, an historically resonant element of the celebrations now underway consists in "a design ideas competition for a hypothetical Australian capital city", called CAPITheticAL (= hypothetical + capital). The comp was launched in 02011 and an exhibition of the top entries has just opened at Canberra's Gallery of Australian Design. I'm writing this because I was on a team which produced one of the exhibited designs.

Our team, "The Engagement Studio", was a diversely trained group of urbanists based in Melbourne, and practising internationally in fields including architecture, town planning, urban design, research, sustainability, and environmental consultancy.*

So, if an Australian capital were to be designed today, what should it be?

Since its purpose was to enable new perspectives rather than rehearse existing conventions, the competition put some big questions up for grabs: "Of what should our national capital consist? Would it be a city in the conventional sense or not? If not, what form might it take?"

In the spirit of designerly curiosity, our group wanted to venture upstream of the usual architectural and masterplanning preoccupations with built form and visual representation of space, focusing instead on a more provocative and, perhaps, futurohistorically potent proposition at the intersection of politics and design. Our idea was a nomadic seat of government, changing from one location in Australia to another every generation: a Roving Capital.

The essential notion is simple. Capitalhood can be decoupled from geography. It's not only that permanence need not be assumed, but impermanence can actually be embraced. Consider the Olympics, which is effectively a temporary sporting capital of the world for a fortnight every four years. Or look at the Burning Man festival, which emerges in the emptiness of the Nevada desert, for a week each year suddenly becoming one of the state's largest cities, before vanishing without a trace. The essential temporariness of these important community events manifesting tangibly in the built environment begins to point to a model for a capital that moves. The Olympics belong to the world, so they move around the world (the World Expo, ditto). Burning Man is notable not so much as an analog to capital function per se, but as a temporary city -- population circa 60,000 last year. It's a living rejoinder to the presumption of urban fixity.

The key to this idea is not mere novelty; it's evolvability. There's no such thing as a perfect, once-and-for-all political solution in a changing world. A polity not wedded forever to a single location within its geographic footprint gives itself more space, both to reflect diversity in the population and to adapt to rapid change. At the national level, such a proposition may be near unthinkable, at least for an old-world pillar like London or Paris. But Australia's geographic vastness and relative political youthfulness together make capital transience a surprisingly apt avenue to explore.

And so, from thousands of kilometres away in Melbourne, we had chosen, for argument's sake -- and somewhat whimsically -- the beachside town of Currumbin on the Gold Coast as the first port of call for our new nomadic capital. Inside the scenario we were weaving, this was the result of a democratic three-stage process for capital selection which we'd dreamed up.

Below you can find The Engagement Studio's first round submission. Wrapped around the usual visualisations (site plans, artist's impressions, etc), the Roving Capital idea was mediated primarily through a set of four newspaper articles from 02016, 02023, 02030, and 02040 -- a slim but evocative cross-section of primary documentary "evidence" from a hypothetical swath of future history.

The team's work was honoured by being shortlisted, which came with an invitation to provide a second round submission late in 02012. But simply to revisit and polish the same material didn't feel like quite enough. On reflection we had become intrigued by the real possibilities behind what had started out as simply a thought experiment. So the most interesting next step we could take with this design idea, we decided, was to "groundtruth" a notion that hitherto had been totally speculative.

We carved out a weekend and traipsed up from Melbourne together, to investigate the actual prospects for the seemingly outlandish premise of making Currumbin on the Gold Coast -- temporarily -- the next capital of Australia. And we made a video to tell the story of what happened:

Through meeting with representatives from the local authority (the Gold Coast City Council), with citizens, and with other designers, we discovered that despite reflex responses of bewilderment or trepidation, people soon began to suggest modifications which could help the idea work in reality.

Putting the hypothetical to the test in situ was a chance to tie the grand, schematic, conceptual layer of thinking down to the human scale and prosaic concerns of everyday reality. (How often does that happen in a design ideas comp? Probably not often enough.) For instance, we'd started out positing that, not unlike the experience of an Olympic city, a stint as capital would provide the basis for a generation-long infrastructural upgrade to the built environment -- the legacy of new public buildings and improved transportation, for example.

But in visiting Currumbin, we were attending to it as a real place, and particularly to the sorts of cultural dimensions which would otherwise have been all too easy to overlook from the remove of Melbourne; not to mention the conceptual distance of an abstract political design conversation. This meant learning some things that may not have come to our notice any other way.


First, we came to recognise more deeply that revolving the political apparatus and meshing the lives of representatives with those of their hosts and neighbours would entail a constant renewal of the democracy; a bottom-up counter to the top-down tendencies inherent in a representative system. Although our own visit was necessarily brief, each encounter with locals, occasioned by going there to groundtruth or reality-check the cencept, was in a sense a microcosm of that same process; a partial corrective to the risks of design and governance from afar.

Second, the charms of Currumbin itself, and the reluctance of residents to entertain its transformation into a bustling urban centre, drew out a version of our proposal which had been latent in the initial idea: rather than a capital city, the notion of the capital place came to the fore. It would not be necessary, and neither would the residents want, to compromise the natural beauty of their home by developing the crap out of it. Many of the functions of government could be well served by facilities elsewhere (and increasingly virtually of course); the essential symbolic and functional requirements of capitalness turn out to be more cultural than physical and technical. (I think my favourite moment was in the meeting with the Gold Coast City Council when we concluded an afternoon discussion by going around the room and brainstorming possible rituals on the beach befitting the inauguration of Currumbin's time as capital.)

Third, while our earlier thinking had emphasised the effects upon a given location of its turn as capital, we came to recognise that influence would, and should, flow the other way too. Legacy was reciprocal, not one-way, so the temporary capital's culture could be rubbing off on the country at large during its generation-long tenure as national gathering place.

Our second round submission also included a mocked up magazine article reflecting on the Roving Capital design and the learning process by which it had come together:

Not only was the concept less crazy on reflection than it may have appeared at first (even to us), but in fact even the seemingly far-fetched launchpad of Currumbin looked like it had legs. Certainly other places could equally have served as the Roving Capital's point of departure, but it was the specific contours of this place which came to offer the necessary grounding to both show and tell a new story about Australian governance.

It was also a pleasure to spend time with and learn from such a diverse and switched on group of collaborators, around a really thought provoking idea. (Ammon Beyerle and Michelle James especially deserve credit for an enormous amount of the work involved.) The content and especially the form of our contribution to this design conversation were fun and interesting to work on, and both the means of representation in round one (artifacts from the future) and research strategy for round two (ethnographic investigation) were, as far as I could see, unique among the entries.

The direct impact of our intervention was no doubt modest -- but for those who met the idea at our design meetings or in other conversations, there's also little doubt that it started them thinking about their home, and their place in Australia, in a different light.

And I suppose the key connection in all this to the ongoing themes here at The Sceptical Futuryst is that our efforts sought to map the plane of abstract novel ideas onto the plane of lived reality, and to expand people's sense of possibility through a participatory design process.

Although hypothetical, it was nonetheless real in all the ways that mattered.

CAPITheticAL is a Centenary of Canberra project supported by the Australian Government and the Australian Capital Territory (ACT) Government, together with the Australian Institute of Architects. The exhibition is on until 11 May -- winners and finalists are all on show, and there's some really nice work there -- worth checking out!

Related posts:
> Architectural time travel
> Why the language of design must enter law and politics
> White House Redux
> Evidence
> The Unthinkable and the Unimaginable
Posted by Stuart Candy at 8:55 am 2 comments: