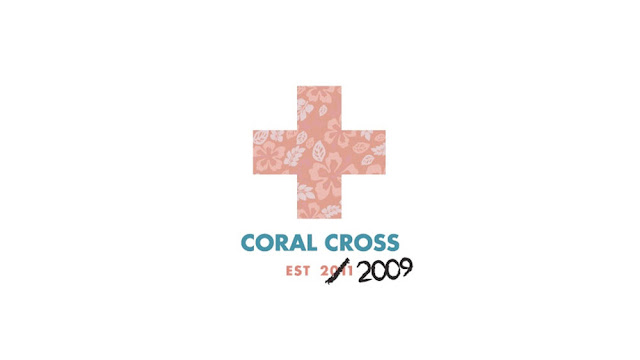 I wrote this reflection a few months ago, just after the COVID-19 pandemic was recognised as such. Now posting here to make it easier to find.

A key purpose of futures practice is to invest thought in possible contingencies, so that when something unexpected suddenly happens you are better prepared.

COVID-19 is a vivid illustration of both the importance and the limits of foresight. Let me tell you a story.

This story is about how the first serious game funded by the CDC came about –– a near-future pandemic simulation, back in 02009 –– and how it was overtaken by real events. And what we learned from that.

In 02007, my colleague Jake Dunagan (now at Institute for the Future) and I were both grads in the futures program at the University of Hawaii at Manoa. In our work there, at the Hawaii Research Center for Futures Studies, we had already designed and run immersive scenarios, set in the year 02050, to engage lawmakers and public in the state’s sustainability planning process. 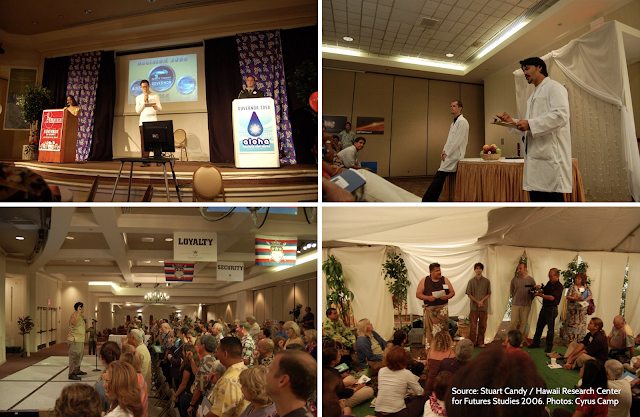 We then started experimenting with other approaches we hadn’t seen in futures work before, but that seemed worth exploring too. One thing we tried was doing physical installations and encounters in public to bring possible worlds to life, which we called guerrilla futures. It drew inspiration from some early interventions by The Yes Men, tactical media and culture jamming à la Adbusters, Brazilian forum theatre pioneer Augusto Boal, some then-recent alternate reality games, and also, well before any of the above, Situationist détournement.

We developed scenarios for our favourite neighbourhood, Honolulu’s Chinatown, through conversations with residents, and then collaboratively translated these futures into experiences in the streets.

One was about the cultural changes gentrification might bring to the area. 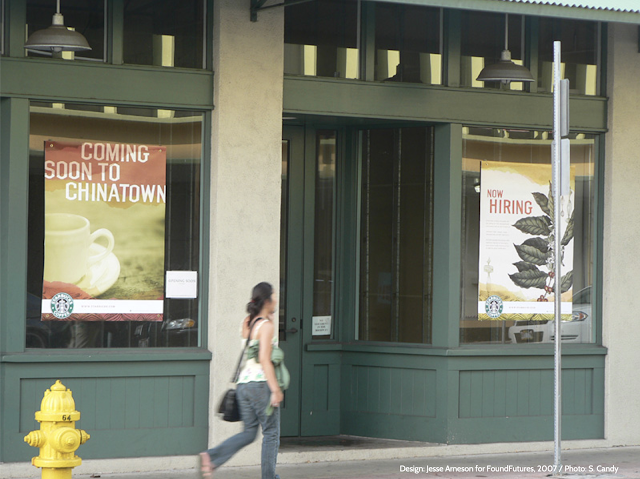 Another explored the potential meaning for Chinatown of China’s geopolitical rise. 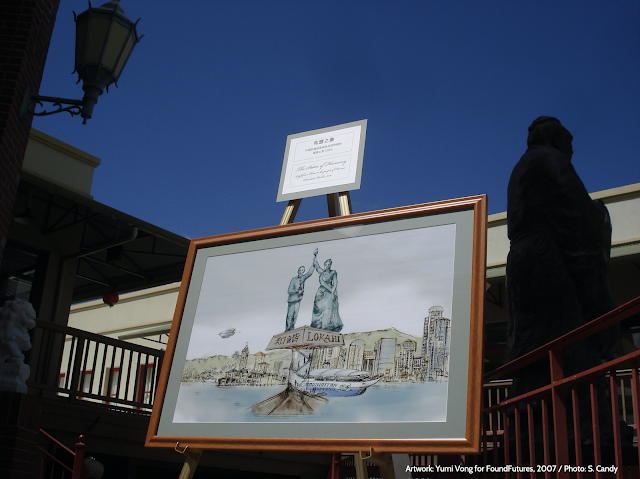 The last scenario was about a deadly flu outbreak. It came partly from our research into the history of the Chinatown district, which at the turn of the 20th century had been burned down after being struck by an epidemic of bubonic plague. 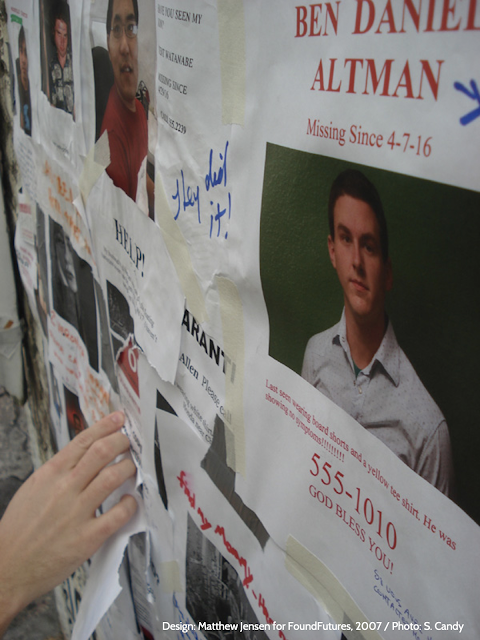 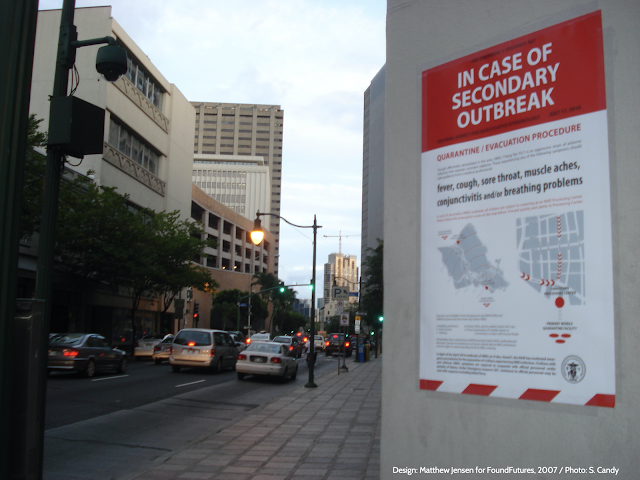 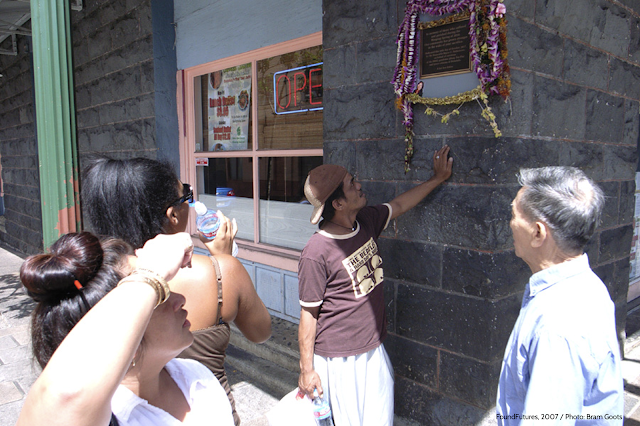 This experiential scenario was specifically designed to echo history, in order to help generate connection to and discussion about future possibilities. Outbreaks, like earthquakes, happen periodically. They can’t be completely avoided; only mitigated through effective anticipation, preparation and response.

The gentrification scenario landed our guerrilla project, FoundFutures: Chinatown, on the front page of the state's daily newspaper. It seems we had staged it plausibly enough that some people briefly thought Starbucks, TGI Fridays, and overpriced luxury lofts were really moving in. 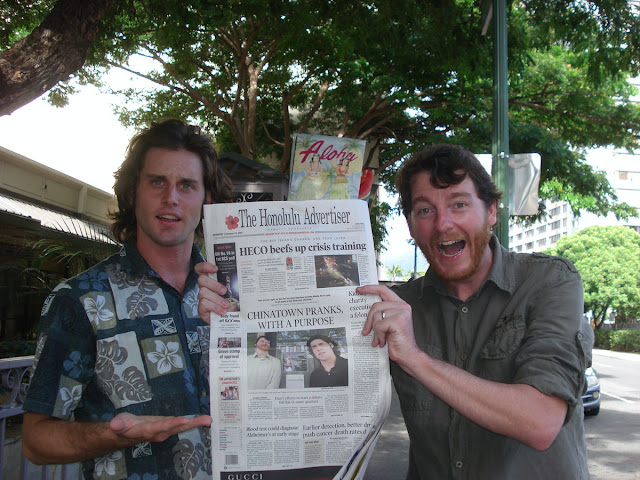 But it was the pandemic scenario that caught the attention of the Hawaii Department of Health (DOH). They came to us and asked how experiential futures might help prepare the population. We started exploring, and the DOH set about the slow process of seeking grant funding.

A year on, they had received a grant from the federal Centers for Disease Control and Prevention (CDC) and still wanted to collaborate. By then, late 2008, I was working as a Game Master on Superstruct, “the world’s first massively multiplayer forecasting game,” an online social platform staged by IFTF and designed by Jane McGonigal, Jamais Cascio, and Kathi Vian. Superstruct was seriously groundbreaking, engaging thousands of players internationally in imagining themselves a decade later –– “real play rather than role play” –– telling stories collaboratively to extend humanity’s survival horizon in-world. 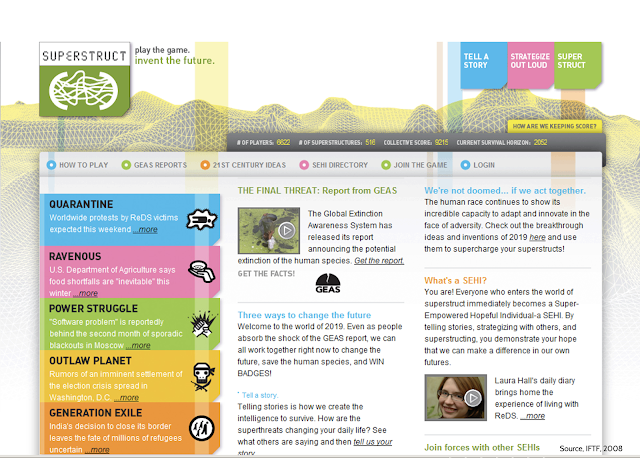 The core design team set to work –– me, Matthew Jensen, and Nathan Verrill, with Jake Dunagan helping out as permitted by his new full-time job at IFTF –– and we quickly identified the overarching storytelling challenge at hand; one set to make or break the whole project: How could we help our audience with no living memory of a precedent, most anyone under 45, to connect viscerally to what it feels like to live through a pandemic? By this point, early in 02009, there had not been one in more than 40 years –– the 'Hong Kong Flu,' in 01968.

We constructed our in-game scenario around a hypothetical, peer-to-peer, Hawaii-based disaster response org called Coral Cross, which had been founded, in our telling, after a devastating hurricane hit the islands in 02011. This part was sort of modelled against the real example of Hurricane Katrina (02005), to help people connect to the stakes. But it posited a constructive, emergent use of social media –– still very new in 02009. We basically planned to have people roleplay online within that frame. 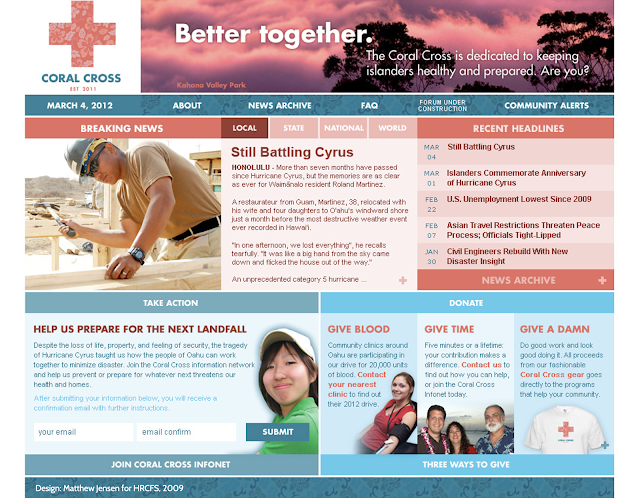 We also had to produce near-future media assets to put on the diegetic (in-world) Coral Cross website. These would be aimed at helping players grasp the strangeness, and seriousness, of being able to catch a deadly disease from a doorknob. The hypothetical pandemic was inherently challenging to us, too, because of course we hadn’t had that experience either. 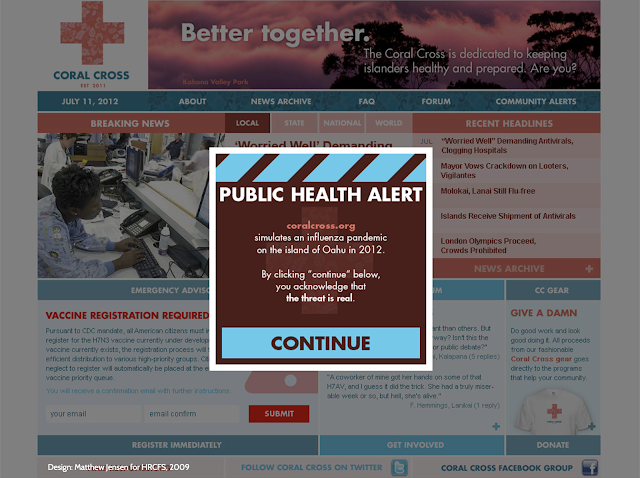 So one day in April 02009, I'm at the East West Center directing a film shoot for the project: a press conference set in 02012, three years into the future, where the Hawaiian Governor’s office announces the WHO declaration of a fully-blown, level 5 pandemic of this imaginary in-game disease.

In the midst of filming, a text message appears on my phone from Matthew, then working from Chicago. One word: “Oink.” Plus a link to an obscure report about an emerging swine flu strain apparently showing up in Mexico and California.

Everyone agreed this was a very strange coincidence.

The disease spread. Within days it had graduated to the front pages of newspapers all over the world.

And the major push we had put in to making this unfamiliar experience of a pandemic more imaginable was instantly made redundant by reality.

For me and the project team, this was just about the most bizarre and unexpected conceivable turn. An elaborately constructed "what if" that we had spent months plotting out, unprecedented in the past 40 years, was now being outstripped by events in real time.

We were still some weeks out from launch, and quickly realised: our plans, this project, absolutely had to change.

We contacted our clients at the health department, who at first tried to reassure us it would be fine to stay the course. We politely insisted otherwise. Fortunately, soon enough everyone was on the same page: it would not be responsible, or even make sense, to run a live social online game about an imaginary pandemic against the backdrop of an actual one.

We had to move quickly. What’s the only thing that can spread faster than a virus? Information.

Our elaborate hypotheticals went out the window. “Alternate reality game” morphed into “emergent reality game.” While still a playable pandemic preparedness campaign, we were now racing a real disease, H1N1 swine flu. The new plan: harness unfolding events to fuel engagement. We rebooted the whole effort to have it revolve directly around helping players learn how to avoid getting sick and spreading illness.

The new Coral Cross launched some weeks later. Players everywhere registered, earned “vigilance” for engaging the medical quiz content we had prepared with expert CDC guidance, and shared their views on the delicate, serious ethical dilemmas around allocating an eventual vaccine. 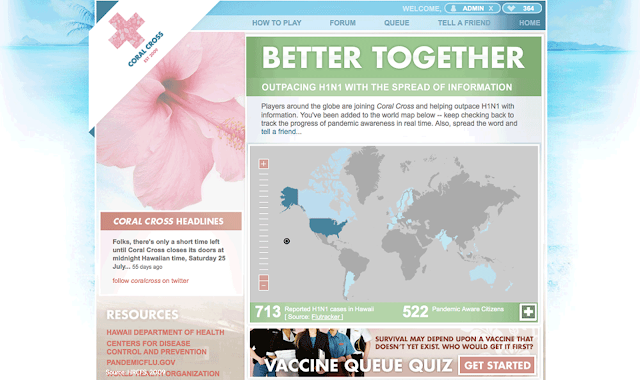 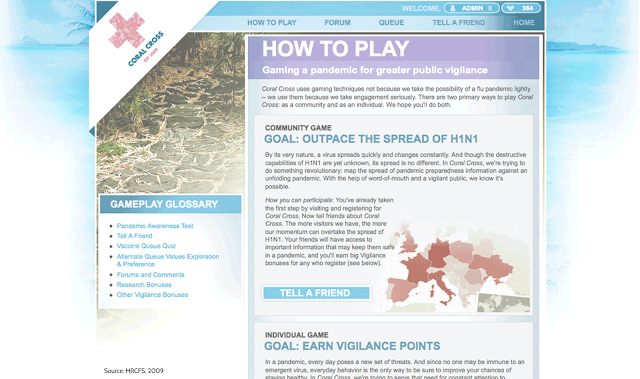 H1N1 marched on. However, it was gradually becoming clear that, thankfully, mortality rates were well below those feared at first.

This welcome news had a dark underside. Concern was activated, only to be followed by an experience for many no different than a regular flu season. The medical establishment, in good faith, had cried wolf, and the wolf duly arrived! –– technically it was a pandemic –– but instead of a terrifying monster, this toothless creature had limped into town. We were left wondering: was the net effect maybe in fact less preparedness?

Hawaii DOH and the CDC were awesome to work with. They were also incredibly happy with the project as, we were told, their first experiment with a "serious game". Many players showed impressive, genuine, heartening engagement.

As you know, last week the WHO declared COVID-19 a pandemic. Not influenza, of course, but for our purposes, a similar enough breed of fiasco. I’ve been flashing back to Coral Cross the past few weeks, and I’ve been asked about the project and its lessons.

First, making Coral Cross was I think the first time I’d personally learned or thought much about the catastrophic 01918 Spanish Flu, as well as the best practices for avoiding sickness, etc. A decade ago, sneezing into cupped hands was still pretty standard polite practice.

Second, it is a genuinely humbling, quite surreal, and deeply ironic experience to have a well-meaning initiative that is all about thinking ahead and resilience get blown out of the water while it is diligently being set up. As ever, “The best laid schemes of mice and men…”

But I think the main lesson is this: Pandemic preparedness is not a one-shot proposition. Neither, for that matter, is community resilience. Nor is the capacity for foresight more broadly. These things require habit. Collectively, they are cultural. Society critically needs an ongoing, collective, plural, high quality forward view.

I look at it in terms of three dimensions: difference, diversity, and depth. We must address not just the difference of a single (however currently-likely-seeming) scenario, though that's as far as many folks go. We also need a diversity of alternative futures, constantly updated. And depth, reckoning with what these entail as lived experiences.

Granted, this is a tall order. But it is also what over half a century of futures/foresight practice and education are all about. Our community is worldwide, not just in one particular place, culture, or department. Many hands have helped to develop, hone and share these skills. (Note: not everyone with "futurist" in their bio necessarily knows about the field, history, methods, etc) If new to you, let me invite you to explore.

To be clear: current urgencies need urgent attention. In addition: we need to cultivate wiser, more farsighted and systemically-literate habits of mind, as individuals, as organisations, and yes, as whole societies; a distributed capacity that some of us call social foresight.

I know it can be done at those smaller scales, because I've spent more than a decade and a half doing it. Meanwhile, what we must do collectively is increasingly clear. Whether we will step up is currently an open question.

“History is merely a list of surprises. It can only prepare us to be surprised yet again.”
–– Kurt Vonnegut, Slapstick

Related:
> Three Dimensions of Foresight
> Hawaii 02050: Ghosts of futures past