The School of Worldbuilding 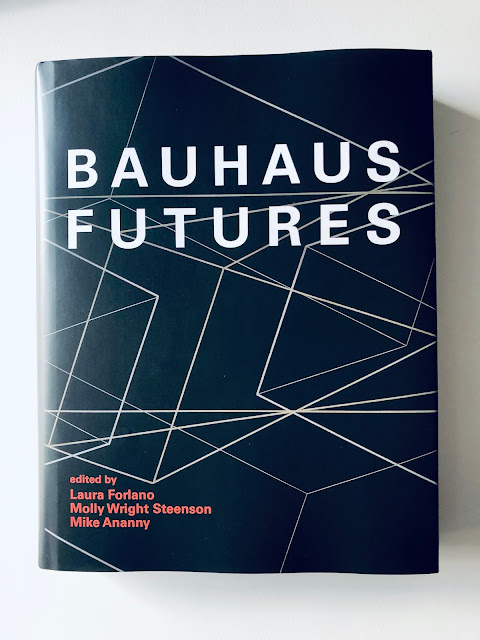 Bauhaus Futures is an edited collection just published by MIT Press to mark the 100th anniversary of a short lived but profoundly influential institution.

Founded by Walter Gropius in Weimar, Germany in 01919, the Bauhaus was an interdisciplinary and international school of design whose charismatic and encompassing vision has had a tremendous impact on design, architecture and art over the past century. As Tom Wolfe wrote, "“It was more than a school; it was a commune, a spiritual movement, a radical approach to art in all its forms, a philosophical center comparable to the Garden of Epicurus."

This new book's point of departure is a provocation, "What would keep the Bauhaus up at night if it were practising today?"

With my longtime Situation Lab collaborator Jeff Watson (USC School of Cinematic Arts), the point of departure for our own contribution is a kind of playfully manifesto-ish contemporisation of the Bauhaus, whereby "the school of building" becomes "the school of worldbuilding" and the motto "Art Into Industry" becomes "Art Into Reality", tying the ambitious reach of the original to emerging imagination-ramifying practices in transmedia storytelling, cinema and media production, game design (alternate reality games, larp, etc), activism, and experiential futures. A sample:

The School of Worldbuilding sees the role of the educator not as a purveyor of content, but as a certain kind of game master. It sees the role of the student not as a receptacle, but as a certain kind of player.
. . .
The School of Worldbuilding is political because the imagination itself is political. Power and authority contour and transform social imaginaries just as those imaginaries contour and transform power and authority. Indeed, domination and liberation alike depend on the imagination. What revolution ever started anywhere but in the imagining of a different world? And what tyranny ever lasted without mastery over imaginal resources?
. . .
The School of Worldbuilding confers no degree. To be a student of worldbuilding is to commit to exploration and experimentation as a way of life. Graduation is not only impossible: it is undesirable. To graduate from the School is to fail out of it.

Edited by Laura Forlano (IIT Institute of Design), Molly Wright Steenson (just down the hall at CMU School of Design), and Mike Ananny (USC Annenberg School for Communication and Journalism), the book Bauhaus Futures includes contributions in a wide variety of formats from a fantastic lineup of writers.

The full text of The School of Worldbuilding can be found here.

The book is now available for order and is set to ship within the next couple of weeks!

Related:
> I Design Worlds (Interview with Liam Young)
> Reverse Archaeology / The Time Machine (Assignment)
> Design is Storytelling
> How to Build a World (Video)
> The Thing From The Future
Posted by Stuart Candy at 11:59 pm No comments: