Speaking of future news, the Palo Alto-based futures consultancy Institute for the Future has a new project which playfully mounts hypothetical future newspaper headlines in a physical newsstand. Anyone can make a submission at the website The Daily Future, including a headline, subhead, lede, date, and image.

Early results were on display at the Bay Area Maker Faire at the start of May. 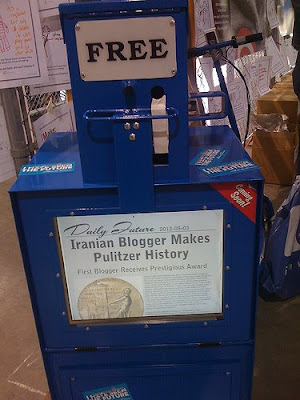 Image: Anthony Townsend, aGreatNotion's Flickr photostream
IFTF's Jason Tester, part of the team responsible for The Daily Future, has been among the key innovators in scenario communication strategy working at the intersection of futures and design for some years already (see, for instance, this Business Week article, and this post on "human-future interaction" from the IFTF blog).

Plans are afoot to add further functionality to the Daily Future website, including new headline formats and user voting. Meanwhile, those who can't make it to the Bay Area to see the newspaper box in person might content themselves with a visit instead to the Newspaper Clipping Generator (via Open the Future), which cranks out reasonably authentic-looking, if generic, images of future-news "artifacts" to order -- type in your newspaper title, headline, date, and story. 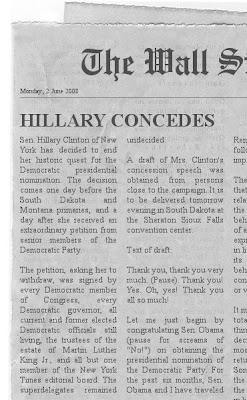 (Thanks Rosa!)
Posted by Stuart Candy at 4:49 am No comments:

Labels: Institute for the Future, news

A columnist for the Wall Street Journal believes that it's time for Hillary Clinton to make a graceful exit from her long-running campaign against Barack Obama for the Democratic Party's presidential nomination in this year's election.

So he has written her concession speech for her, framing it as a news report from the near future.


For those who can't handle the suspense, we fast-forward the campaign to June 2, in Sioux Falls, South Dakota. A wire-service reporter, who has covered the Clinton campaign for 17 months, files this story:

Sen. Hillary Clinton of New York has decided to end her historic quest for the Democratic presidential nomination. The decision comes one day before the South Dakota and Montana primaries, and a day after she received an extraordinary petition from senior members of the Democratic Party.
[...]
A draft of Mrs. Clinton's concession speech was obtained from persons close to the campaign. It is to be delivered tomorrow evening in South Dakota at the Sheraton Sioux Falls convention center.

This is a neat bit of punditry straddling legitimate journalistic activism and satire. It would be good to see more of these -- in-world projections of preferred scenarios -- in the media.
Posted by Stuart Candy at 4:16 am No comments:

Put on a happy face

There's more than one way to skin a world. 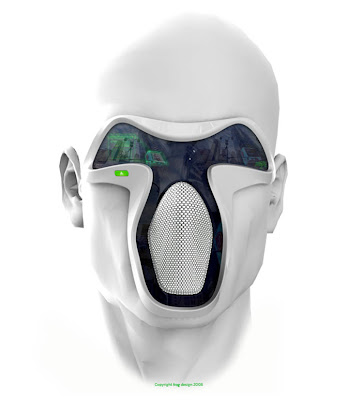 The future isn’t all rosy. Increasing pollution, overpopulation, poverty, and climate change – society’s impact on the earth is reaching a breaking point. And while we may work to slow the onset of these catastrophes, reversing them is no longer an option. The question becomes, how do we live with the troubles we’ve already caused?
[...]
In a troubling future, these augmented reality devices would offer a new dimension - a virtual layer that could be used to “re-skin” the troubling outside world. A boundary between the wearer and the world around him, the device would become a sort of visual drug, used to make the world appear a better place – even if just for a moment. 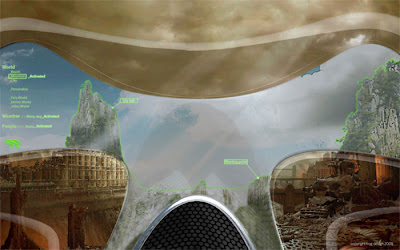 This is a concept design released last week by international creative consultancy frog design -- not dissimilar in promotional intent from other concepts blogged here in recent months. 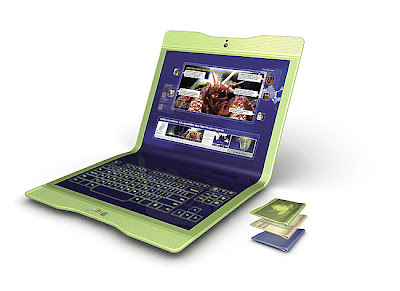 The gelfrog (date unknown; image via oobject): "a futuristic laptop for teenagers. [...] The gelfrog converges style and function. The final product is rugged, yet flexible enough to be used in the classroom, in the urban jungle, or on the nature trail." 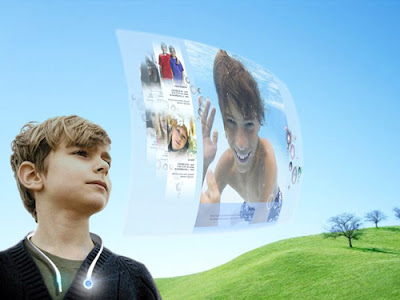 Tribons (date unknown): "These ultra lightweight and powerful systems connect kids with friends and family and through this provide emotional support which is necessary to compensate the trend of children growing up anonymously in cities and separation caused by increased mobility. [...] The wearable system uses future laser projection technology and is controlled by an intuitive 3D user interface." 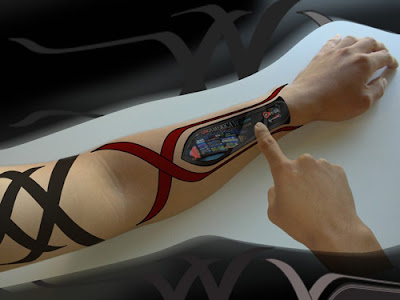 Dattoos (02005): "The idea of DNA tattoos (Dattoos) is to use the body itself as hardware and interaction platform, through the use of minimally-invasive, recyclable materials. [...] The final concept aims to achieve a convergence of the following capabilities: DNA-reader and identification technology; nanosensors and interactive "touch reading" for finger tips (Braille); pattern and image recognition; self-learning and educational applications; living materials that change shape and feel; flexible OLED displays; full voice interaction, directional laser speakers; bionic nano chips; and cyborg components." 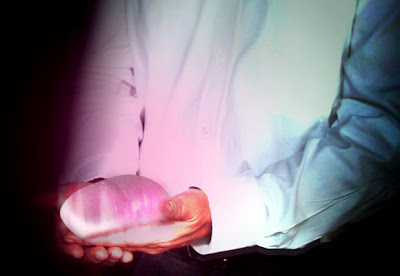 The Aura (02008): "The Aura concept brings together the professional, responsitory nature of the Western health care system with the personal, preventative focus of alternative therapies... The user never needs to be taught what to do with the object, but can interact with it on his [sic] own terms. While his skin is in contact with the device, different wavelengths of light and sound pass through his skin: infrared light measures blood flow, ultrasonic rays scan the resistance of his skin tissue, others capture the sound and speed of his heartbeat, the firmness of his grip."

In January, the group released a set of concepts under the nebulous rubric "The Role of Tech in 2020"... 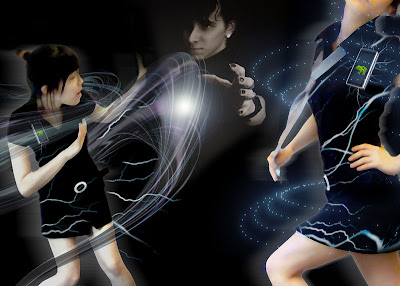 The Personal Forcefield: "Fabrics of the future will move beyond cloth to technology-infused supermaterials. Imagine a web of woven conductive filaments and circuits made into everyday clothing that can build up enough kinetic energy generated through walking to be able to recharge a mobile phone. The same fabric has the potential to save up kinetic energy and create a personal forcefield which, when activated, could stun an attacker, unaware of the clothing’s hidden abilities." 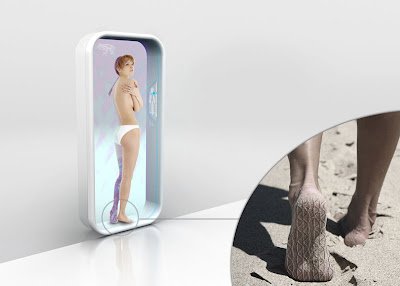 The NanoDoor: "Nanobots, an emerging technology that works inside the body, will become a permanent fixture inside our bloodstreams from an early age. Homes will be equipped with a NanoDoor which, once entered, will reconfigure an individual’s nanobots and put the body in prime position for peak performance. Not only will such re-programming of the body’s functions serve to improve overall health, it could also be developed to enhance the body too. Going for a jog on the beach? Then grow some temporary skin-tread on your feet. Long journey ahead? Expand your bladder capacity to avoid unwanted stops on the way. Rock-climbing? Just add some length to your fingers." 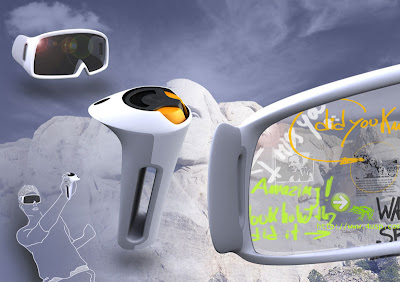 The Eye Camera: "Miniaturization of electronic devices will make cameras so small that they could be easily implanted in any part of the body. A camera could be inserted into the eye, mimicking the user’s view as closely as possible and enhancing his or her vision. A wireless network connection and live content via a portal would allow others to log in and literally see the world through the user’s eyes, witnessing private and public activities." 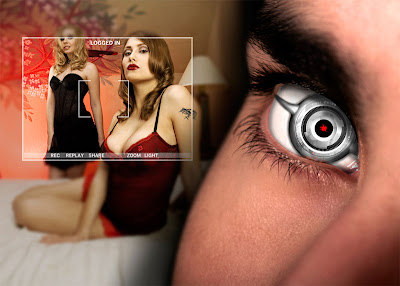 The Digican: "Using a digital spraycan, users can "graffiti" anywhere in the world leaving messages, recommendations, and advertisements on anything from the ceiling of the Sistine Chapel to the Great Wall of China. With the help of an augmented reality screen that can be worn like a pair of glasses, users will be able to see the virtual graffiti. Ideal for building communities and sharing information, this is the ultimate worldwide wiki, transforming public spaces into places of public expression. Content ranging from personal expression to information on a location to video diaries can be graffitied without permanent damage to historical monuments." 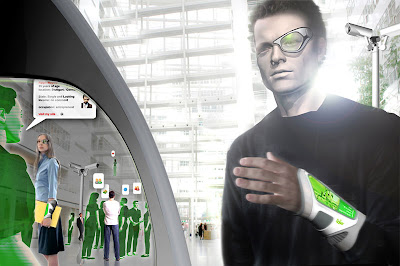 First Life: "The growing network of closed-circuit TV surveillance has the potential to be harnessed to create an immense 3D “virtureal” world in which real people move and interact with virtual subscribers. These virtual subscribers can inhabit a real-time location anywhere in the world, witness real-time events, interact with other virtual inhabitants and communicate with people in an actual location. Special eyewear would allow people in an actual location to view and interact with virtual participants."

Now, of all the concept designs and videos we've seen in recent months, there are typically very few that engage the tricky question of what's actually going on in the world in the future portrayed -- even though that context would have no little bearing upon the viability of the proffered design.

What we have instead with frog's latest, interestingly grim, contribution to our gallery is less augmented reality than portable fantasy. (Of course, some people manage to effect this kind of ontological makeover -- like Voltaire's indefatigably upbeat Dr Pangloss -- with sheer force of personality. Others do it with drugs. Soma, anyone?) But the point I'm getting at is that the usual backdrop for gadget concept designs, if you can call it a backdrop, is as minimalist as can be: an empty black or white background, spartan office buildings or nameless, placeless, rolling green fields against a deep blue sky; the most neutral, washed out, content-free and non-committal of settings. An imaginal vacuum. The Digital Escape by contrast, offers a glimpse, hastily remedied, of a post-collapse future; the one usually concealed in favour of bland, detail-free backdrop; the one disowned and denied by design's chronically Panglossian gizmo parade.

It is rare because it deliberately confronts, and helpfully seeks to mitigate, the depressing prospect of an outside world too horrible to face unmediated: an apocalyptic landscape dressed in more palatable garb. One could ask by what means in a collapsed society such intensive digital content would be delivered to these nifty neo-cowboy bandannas, these anonymising cybermasks, but of course their practicability isn't the point.

There's something resonant, or at least symptomatic, I think, about this fantasy injunction (however tongue-in-cheek) to put on a happy face, to don a mask, in preference to engaging -- and designing -- deeper alternatives to our most unpleasant possible paths. Still, it's unusual because it seems most product design, like most urban planning, and most corporate and government forecasting in Western economies, rests on the cosy assumption of business as usual (with perhaps a concession to contingency in the form of alternative growth rates -- low, medium, and high).

But take a deep breath, and look what happens when the mask slips.

[I got back to Honolulu last night after three weeks on the East Coast, with plenty to blog about, so watch this space...

Also, thanks for the link Natron.]
Posted by Stuart Candy at 12:49 am No comments: