Today I was teaching Dator's introductory futures class (he's in France for ISU), and the theme for this week is the influential thesis of the 01972 Club of Rome report, The Limits to Growth. Seeking an intuitively clear instance of the hazards of simple linear extrapolation ad infinitum -- perhaps the cardinal sin of poor futures thinking, alluded to here in the previous post -- what sprang to mind was an example that many futurists would recognise as classic: London's 19th-century horse manure problem.

I don't know where I first encountered it, but this story is a beauty. And, searching online this afternoon I found (via this blog post) an elegant retelling by a PhD candidate at UCLA, Eric Morris, in the Spring 02007 edition of Access [pdf download], the official magazine of the University of California Transportation Center. I'll quote it here at length:

In 1898, delegates from across the globe gathered in New York City for the world’s first international urban planning conference. One topic dominated the discussion. It was not housing, land use, economic development, or infrastructure. The delegates were driven to desperation by horse manure.
[...]
The situation seemed dire. In 1894, the Times of London estimated that by 1950 every street in the city would be buried nine feet deep in horse manure. One New York prognosticator of the 1890s concluded that by 1930 the horse droppings would rise to Manhattan’s third-story windows. A public health and sanitation crisis of almost unimaginable dimensions loomed.

And no possible solution could be devised. After all, the horse had been the dominant mode of transportation for thousands of years. Horses were absolutely essential for the functioning of the nineteenth-century city -- for personal transportation, freight haulage, and even mechanical power. Without horses, cities would quite literally starve.

All efforts to mitigate the problem were proving woefully inadequate. Stumped by the crisis, the urban planning conference declared its work fruitless and broke up in three days instead of the scheduled ten.

There are two points I want to draw out here about this anecdote.

The first point is, the very idea of nine feet or more of horse manure covering a city street exemplifies pretty vividly the concept of limits to growth. Any systemic process increasing overall instability is bound to end sooner or later. In the "four images of the future" framework we use at Manoa to stretch thinking beyond superficial business-as-usual extrapolation, a continued growth pattern in a social situation will face a corrective in the form of one (or more) of the other three -- collapse, self-discipline, or transformation. The grotesque absurdity of a city drowning in horse waste illustrates not just the limit of growth processes, but the limits of blinkered, continued-growth thinking itself. (One student today astutely observed that, as things turn out, we're probably buried at least that deep -- but just in other kinds of shit. Touché.) 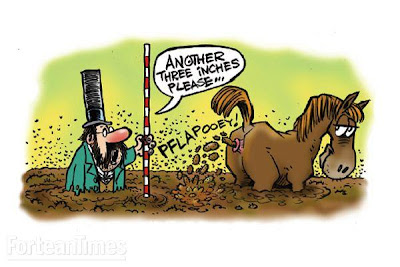 The second point, going meta on the first, and to some degree at odds with it, is that however well the story illustrates the pedagogical point I had in mind, it may well be apocryphal rather than factual. I hadn't heard this version about the 01898 planners' shindig before, which adds a neat, plausible context for the factoid in question -- specifically, whether these retrospectively amusing predictions about fantastically high manure-piles were ever really made. (We're not doubting here the well-documented historical context which supposedly prompted them -- massive reliance on horses for transportation, unsound sanitation practices, etc.) Now, in principle, one could delve into the archives -- Mr Morris's "further reading" list at the end of the article looks like a recipe for hours of harmless amusement -- but thankfully others have given some thought to the factual basis of this irresistibly catchy story before. One myth-busting website argues as follows:

The details vary with almost every telling: the doom-merchant is a politician, scientist, city planner, or journalist; the doomed town is London, or various cities in the USA, or a particular famous street such as the Strand; the predicted date of the catastrophe ranges from the turn of the century to 1950; and the depth of the dung goes from knee-level upwards. The underlying message, though, is consistent: forecasting through extrapolation is risky, because it can't take account of technological revolutions. By implication, all predictions of disaster should be treated as mere alarmism; American conservatives, sceptical about the dangers of global warming and pollution, are especially fond of the dung parable. One detail is invariably missing from this story: the name of the failed seer. If the prophecy had ever really been made, someone would surely have uncovered its author by now.

The importance of attributing predictions is close to my heart, because reputation is really the currency of LongBets, which I have been working on at The Long Now Foundation. The project's aim is to improve the quality of forward-looking discourse by encouraging accountability in prediction-making.

But what's really going on here, with the persistence of this (quite possibly) cock-and-bull horse tale? Whether or not the prediction was actually made by a real 19th-century pundit and documented as such seems almost not to matter; because it doesn't stop the account from capturing our imagination -- in John Ford's phrase, we "print the legend". There are some stories which are so useful, interesting or crystal-clear in confirming what we think or believe about The Way Things Go that they persist, they have a memetic pull all their own. Whether or not they're literally true, it seems we sense they ought to be, and the truth of them resides at some other level. Another example, I think, is a story told by Long Now cofounder Danny Hillis, which illustrates beautifully the Foundation's animating idea of fostering long-term responsibility:

I think of the oak beams in the ceiling of College Hall at New College, Oxford. Last century, when the beams needed replacing, carpenters used oak trees that had been planted in 1386 when the dining hall was first built. The 14th-century builder had planted the trees in anticipation of the time, hundreds of years in the future, when the beams would need replacing. Did the carpenters plant new trees to replace the beams again a few hundred years from now?

Another nice rendition of that story appears here, but includes the caveat that even the college's own website logs some doubt as to its veracity.

So, however much we might like to think of ourselves as relying on empirical evidence for our understanding of the world, in actual fact we flesh and blood types find ourselves depending to a great extent in everyday life on intuition, hearsay, factoids and anecdotes of varying degrees of trustworthiness. I don't mean to decry this situation, but simply to observe that, for various reasons which ought to be obvious, we are all to some extent pragmatists, and incessant fact-checking is by and large, and with good reason, reserved for the most ritualised corners of the laboratory, the courtroom, and the ivory tower.

It's not that truth is unimportant. But there are different types of truth. The horse manure story -- that once upon a time, a particular problem was set to swamp us, which, a short while later historically, seems barely imaginable -- is to me a parable that captures something true, and monitory, about the hazards of prediction, even if its historical credentials are doubtful. It's a micro-myth, a shortcut to a greater truth.

I take it as axiomatic that there are no future facts. Perhaps it's inevitable, then, that when it comes to futures, gaining insight sometimes involves using parables -- or even horseshit.
Posted by Stuart Candy at 6:54 am

You'll please forgive my off-point comment. I've observed (and been perpetually amused by) your use of the naught date precursor ("02007", in this post), reminding us that there are at least tenfold future cycles to consider. Has there been standardization of such a denominator among futurists, particularly in consideration of the conceivably infinite march of years? Disregarding HTML character limitations, would "Ō2007" confer the lesson more accurately?

This hasn't become standard. It's a tic I picked up from The Long Now Foundation, which is propagating the habit ostensibly to solve the Year 10,000 problem (like the Y2K bug, but further away). A more persuasive reason is the symbolic shift to a long-term orientation. But the practical and the symbolic reasons eventually merge. Long Now cofounder Stewart Brand wrote in an essay in 01998:

"How can we invest in a future we know is structurally incapable of keeping faith with its past? The digital industries must shift from being the main source of society’s ever-shortening attention span to becoming a reliable guarantor of long-term perspective. We’ll know that shift has happened when programmers begin to anticipate the Year 10,000 Problem, and assign five digits instead of four to year dates. '01998' they’ll write, at first frivolously, then seriously."

By the way, it may not be widespread yet, but it's creeping into the culture... here, for instance.

In terms of computer programming, yes, 0XXXX has its practical application (for at least a few more years). But in academic discourse, and in consideration of a truly long-term perspective, might we borrow the mathematical bar notation (of 1÷3 fame) to show the infinite number of zeros that may, theoretically, precede our valued calendar year?