From hypothetical to hyperthetical... 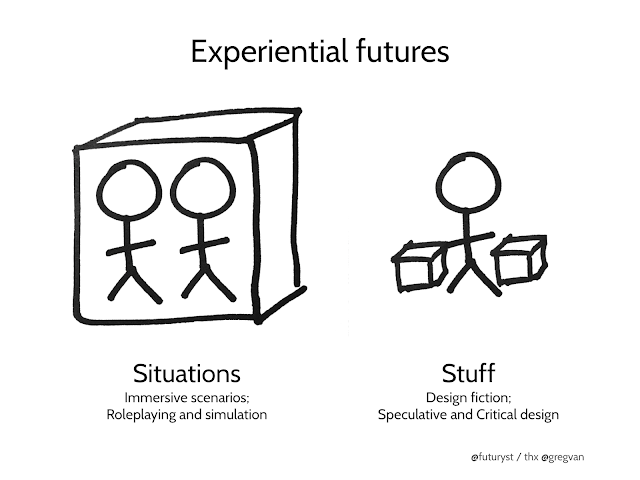 I recently wrote a short intro to Experiential Futures (XF) for designers interested in transition-oriented practice. XF is a big topic, so other approaches and formats have their place – a plain-language one-pager from The Economist; a book-length treatment in The Futures of Everyday Life; an interview from earlier on in its development – but this post gives a more up-to-date brief encapsulation of the overall concept, and the evolving design space it refers to, with pointers to further reading.

To design is to grapple with the future. To design for civilisation-scale transition, even more so. The trouble with ‘the future’ is that it doesn’t exist. It’s a construct, a stew of more or less examined assumptions and interpretations carried over from the past, blended with extrapolations of trends and emerging issues in the present, inflected through hope and fear to produce fantasies and imaginaries projected into various quarters of the possible, probable, preferable, and their opposites.

It turns out that the troubling nonexistence of the yet-to-be is also an opportunity. Pages unwritten await their authors. The futures in our minds may sometimes pretend to us that they simply reflect on and respond to the outside world, but they are a technology of discourse and agency, a special subset of imaginative storytelling. While seeming merely to be inspired by observed change, they are in fact covertly shaping it.

Experiential futures refers to a set of approaches to make alternative futures present. The juxtaposition of ‘experience’ and ‘future’ is a deliberate contradiction: the here and now, the impressions of senses and mind, 1:1 scale reality as we experience it moment to moment; all this set against an inherently abstract notion of the to-come, by definition absent, forever at a temporal remove. XF seeks to make productive use of that contradiction, and harness the energy of its friction, by collapsing the distance, rendering absent and abstract futures cognitively and culturally tractable.

An experiential scenario is a future brought to life. It’s a tangible ‘what if’, more textural than textual, and a way of thinking out loud, materially or performatively, or both. Seeking to collapse temporal distance and offset our habitual discounting of future events (Ainslie, 2001), XF angles for ‘what ifs’ real enough to trick the body into taking them seriously. Its contours are generous, taking in “the gamut of approaches involving the design of situations and stuff from the future to catalyse insight and change” (Candy, 2015, p. 18). XF “involves designing and staging interventions that exploit the continuum of human experience, the full array of sensory and semiotic vectors, in order to enable a different and deeper engagement in thought and discussion about one or more futures, than has traditionally been possible through textual and statistical means of representing scenarios”. (Candy, 2010, p. 3)

As a lens, it is an invitation: how might you take your idea –– any idea –– of a future and bring it concretely to life, now? This move may be motivated by a wide diversity of agendas from the exploratory to the evangelical, the entertaining to the educational (Candy, 2010, p. 114). Any reason to think or feel into any future is a reason to mediate it, make it experiential. The matter of interest is not the design of artefacts per se, but the design of circumstances for thought (which may manifest as or incorporate artefacts). Less contents than context; less stuff than situations; less the things themselves than the conversations, insights and actions they enable. In each case, the latter implies and includes the former as appropriate.

"We must make our freedom by cutting holes in the fabric of this reality, by forging new realities which will, in turn, fashion us. Putting yourself in new situations constantly is the only way to ensure that you make your decisions unencumbered by the inertia of habit, custom, law, or prejudice--and it is up to you to create these situations." (Graeber, 2015, p. 96)

Some experiential futures examples from among many (for more see Candy, 2010; Candy & Dunagan, 2017):
• A product that immerses its user in a simulation of natural environments, apparently promoting the health of stressed-out urban office workers in the early 2020s, launched and demonstrated in the midst of a large (real, present-day) interior architecture trade show (Alter, 2016).
• A technology for babysitting infants in a virtual pod, presented in a present-day art museum, but surrounded by the accoutrements of a commercial sale context (product specifications, price banners, brochures), as one might find them in an electronics store in the next decade (Furness, 2017).
• A special future edition of the New York Times, reporting from the following year and embodying a fulfillment of progressive/liberal fantasies, handed out to commuters in the streets of Manhattan (Lambert, 2009).

The view through this lens is the capacity to regard the effective engagement with futures as about the generation or construction of scaffolding to think and feel with. The entire sensory and semiotic context of the body is the relevant canvas – and not just for the individual, but also for groups. ‘The Time Machine’, a room where you can inhabit a pocket of (say) the year 2040 for (say) 20 minutes, is one example of a pattern for immersive scenario creation that becomes possible through this lens (Candy, 2013; 2014).

Consider the philosophical concept of the ‘extended mind’ (Clark & Chalmers, 1998; Dunagan, 2015): thought isn’t contained exclusively inside our skulls, but it occurs in and with our environments. This view could be adopted as a frame for examining all sorts of ordinary, existing practices, but it can also be taken further. If a notebook or whiteboard is a convenient prosthesis for memory, an experiential scenario is a prosthesis for imagination. It is a provisional, localised, and made-to-order ‘mental ecology’ (Bateson, 1972). The manifestation an imagined future context (see Imaginaries*) variously in forms tangible, material, interactive, playable and performative, provides a wealth of opportunities to think and feel with beyond producing the most eloquent report. Experiential futures uses the idioms of reality to mediate hypothetical as hyperthetical, something more than just a thesis; an almost-real place.

Media theorist McLuhan’s concept of the anti-environment may be useful here. The anti-environment relates to the environment in a sort of dialectical figure/ground relationship whereby the former highlights the unnoticed or taken-for-granted properties of the latter (the fish out of water realises with a jolt, at last, what it has been swimming in). “It is useful to view all the arts and sciences as acting in the role of anti-environments that enable us to perceive the environment.” (McLuhan, 1967, p. 42)

So: all possible futures (literally an unimaginably vast space of stories one might tell) multiplied by all possible situations and stuff from within each. This represents a dazzling astronomical superabundance of theoretical design possibility. It is both wildly transdisciplinary and transmedia in character. That does not mean that the result or the ideal is an all-encompassing, extravagant gesamtkunstwerk: it is simply a medium-agnostic design opportunity. Simplicity will often be best, but it is perhaps the “simplicity on the other side of complexity” (reputedly prized by Oliver Wendell Holmes). It’s more a matter of producing circumstances than a report, a video, or a telling artifact: any one of those things may indeed turn out to be the best thing for the job, but noting and avoiding unjustifiably mediumist assumptions is key.

All of the above brings into focus the critical need for thoughtful and critical attention: what futures to choose to manifest in this way, when we consider transitions? Prototyping or performing something random that is purportedly ‘from the future’ might seem worth it as a lark, the first time or two, but sooner or later the mere conceptual novelty of long-range prototyping for its own sake has to wear off (Candy, 2018, p. 243). What is left is perhaps a closer attention to which futures, in whose interests, with what effects. Deeper questions. More critical questions. Opportunities to do better.

Designers are increasingly turning attention to designing for transitions –– in contrast to a traditional focus on the adjacent possible.

This piece is part of an article I wrote with my colleague at CMU School of Design, Dan Lockton, aiming to highlight a range of terms and practices that could be useful for designers keen to work on bigger issues and longer time horizons. More specifically our focus was on existing approaches that might help with the "vision" aspect of transition design; imagining and articulating how things could be otherwise, later in time.

(Dan's brilliant research and scholarship deals often with questions of how design relates to imagination, metaphors, and mental models – check out his work here.)

Our article, "A Vocabulary for Visions in Designing for Transitions," assembles a sort of preliminary lexicon; seven entries each introducing an existing "lens" to invite the designer to approach the vision/transition space differently, with a short "why have we included this?" rationale appended. The other concepts outlined are Backcasting, Circularity, Dark Matter, Imaginaries[*], Lenses, and New Metaphors.

The full article appears in slightly different forms in Proceedings for DRS 2018 (the text above comes from here; the Design Research Society Conference held in Limerick, Ireland in the summer), and in a special transition-flavoured edition of the Argentinian design journal Cuadernos del Centro de Estudios en Diseño y Comunicación, edited by Terry Irwin, and featuring splendid work by many of our colleagues on related themes.

See also:
> Dreaming Together (from the book Made Up: Design's Fictions)
> Experiential Futures in The Economist
> Interview: Imagining Transitions
> Ethnographic Experiential Futures
> Foresight is a Right
> The Futures of Everyday Life
Posted by Stuart Candy at 10:44 pm No comments: