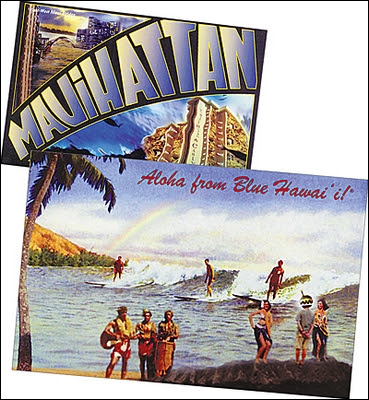 Last week, a cross-section of Hawaii's influential business, political and community leaders received a series of mysterious postcards in the mail -- no return address supplied -- from the year 02036.

On Monday, it was an official (non-diplomatic) invitation from the sovereign "Commonwealth of Hawai'i".

On Tuesday came a promotional flyer, in the form of a vintage Hawaiian postcard, from a virtual reality company advertising a trademarked, immersive electronic version of the mythical "Blue Hawaii" of the 01960s.

On Wednesday, a souvenir postcard appeared from the Two Seasons Underwater Hotel and Casino, adjacent to the East-West Maui Bridge in buzzing "Mauihattan".

Finally, Thursday brought a plea for help addressed to the United Nations, headquartered in China, on behalf of a beleaguered Hawaii suffering from mob rule and guerrilla warfare in the wake of Hurricane Cyrus.

The following Sunday, 27 May, the Honolulu Advertiser ran this article investigating the campaign. (You can see the front side of each postcard here.†) The cards were also distributed to be found by other unsuspecting members of the public, in places such as cafes and bookstores around Honolulu.

This was an experimental exercise in "ambient foresight" -- bringing alternative futures to the streets, and into people's lives in unexpected ways. The signs so far encourage us to think that this modest effort did indeed prompt a degree of reflection on the part of recipients, about the various directions Hawaii could take over the next generation or so.

FoundFutures is the name of the project, which is likely to manifest in other ways as time goes on. Many thanks to all those who helped Jake and I make this possible, most notably our exceptionally talented graphic designers, Yumi Vong (postcards) and Matt Jensen (website).

Hi, my name is Simeon Spearman and I'm a student in the Houston Futures Studies program. I just wanted to let you know I think that this "guerrilla futures" approach is awesome and was very excited about the potential for this when I came across this posting today.

When I came across this IFTF article a few months ago, I had begun thinking about how cool it would be to take a guerrilla approach to futures thinking, and I'm glad to know others have been thinking along this same line and have actually carried it out!

Anyways, just wanted to comment as this post was the highlight of my internet readings today (I think it even surpassed all the talk about the new Microsoft Surface).

Great to hear from you, and thanks for the compliment. If there's any way you'd like to get involved (or, involve us in projects you're doing from Houston), by all means... we think there's great potential in this strand of work too.

The IFTF article you cited is by one of our influences / kindred spirits in developing the "artifacts from the future" meme, Jason Tester. Wired magazine's "Found" feature is another.

Two of the things we've tried to do differently with the FoundFutures project are (a) to inflect the design of one object in alternative -- ideally, mutually exclusive -- directions to suggest genuinely diverging scenarios, and (b) to set these items loose in the urban environment (Banksy-style) to be encountered unexpectedly, as opposed to in futures reports or workshops where they may be relatively less surprising. If you have any insights about comparable existing projects, possible next steps or variations you're interested to explore, or ways to evaluate their impact, I think these are all live issues right now.

Would love to chat with you more about this. Could you shoot me an email at srspear at gmail dot com so that i can get your contact info and move our correspondence to email?

I came across your posting today. Two Seasons Underwater Hotel, which is mention in this posting. Let me know the hotel name and rent.

The idea of the postcards is a bit like expanding an Overton Window:
https://en.wikipedia.org/wiki/Overton_window