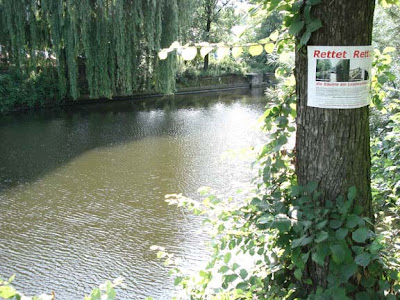 Along this scenic, leafy canal in the Berlin borough of Kreuzberg can be found a series of posters exhorting passers-by to save the trees at the Landwehrkanal (Rettet die Bäume am Landwehrkanal).

Citizens have launched a public awareness and protest initiative against a local public works project now underway, which they fear will result in the unnecessary clear-cutting of hundreds of trees in this attractive residential area. They see it as a heavy-handed response to maintenance long overdue on the canal's banks below the waterline. (See the English-language flyer on the collective's website for details.)

But, worthy as the cause may be, why draw attention to it here at t.s.f.?

Well, the protesters have adopted an interesting tactic to alert people to the potential aesthetic cost of the tree-felling measures. 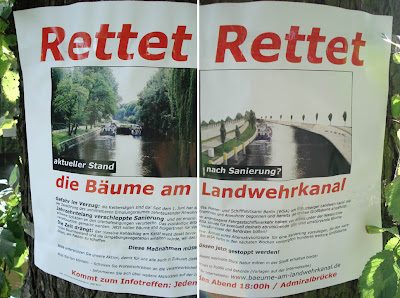 At left is a picture of the canal bank as it looks today: aktueller Stand = current conditions. The one at right is an artist's impression of the possible future appearance of the waterway, all but denuded of its vegetation: nach Sanierung? = after reorganization? (NB This image is in halves because the curve of the tree prevented me from capturing the poster properly in one shot.)
This poster campaign makes for an instructive comparison to the dramatic San Francisco images posted here a month ago, which deployed an almost identical "before-and-after" approach (albeit with higher production values for its hypothetical imagery), urging onlookers to consider the potential consequences of -- in that case -- an earthquake. Both, however, try to spur some kind of personally or politically significant action using imagery from a possible future.

Now, there's a question we might ask here about the plausibility of such future images -- how important is "truth" in hypothetical futures? In the Berlin "after" shot, a degree of artistic licence may have been taken (or forsaken) in the photoshopped bareness of the background: no buildings, no clouds -- just blank, barren space, exaggerating the loss of foliage. The broader "epistemology of futures" issue is one to explore in more detail another time, but for now it's worth noting that, in many circumstances, future scenarios -- whatever the medium -- are not necessarily supposed to be about correct forecasts, but may instead be intended to serve as a pragmatic, heuristic device for having us consider certain swathes of possibility space more seriously.

Which is part of why I have become increasingly interested in the potential of art and media (anything but text) to prompt that kind of futures-oriented reflection. I'm very interested in the way that making future possibilities manifest, visually or in other ways, might open up different ways of thinking about those possibilities; this is of course the basic idea behind our FoundFutures project. And, as both the Berlin and San Francisco examples suggest, playing with the frontiers of the imaginable (the visible) can carry a political charge. A worthwhile next step along this line of inquiry could be to think about ways (beyond anecdote and speculation) to gauge the actual impact of this way of "presenting" futures.

Thanks to my EGS colleague Jason Wagner in Berlin for pointing out the Landwehrkanal campaign. Any other examples to add to the mix would be very interesting to hear about; there are probably thousands out there. The architect's impression of the future appearance of a real estate development -- those large images plastered across the fences around building sites -- arguably perform a similar function...
Posted by Stuart Candy at 12:16 am 3 comments: