Could this be the future of WikiLeaks? 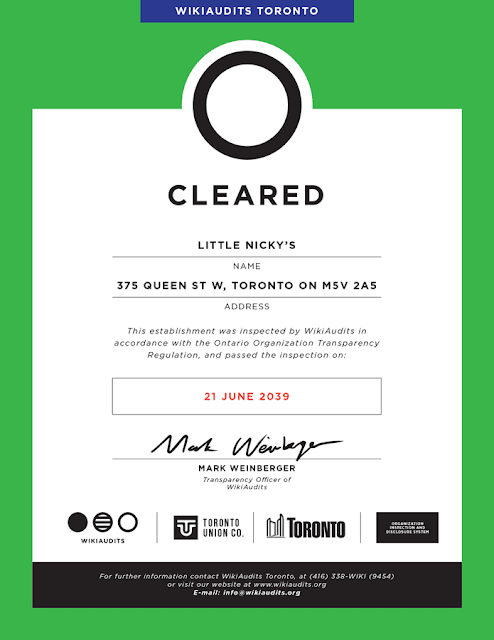 Many organisations claim some larger purpose, although not that many offer a specific vision for the future they wish to bring into existence. As it turns out, even fewer make explicit such visions as they purport to follow by actually showing how the world could look, feel or work differently if they succeeded.

One technique I've developed for teaching experiential futures practice in recent years is to have students identify and adopt an existing vision –– as publicly stated, when available, or inferred, when it's not –– of an organisation they deem worthy of closer attention. The students can then draw on the whole range of experiential futures approaches and their cognates (strategic foresight, transmedia storytelling, design fiction, live action roleplaying) to bring that vision to life in the present, while in a sense reflecting the organisation's aspirations and assumptions back to it in a more detailed form.*

This is a way to interrogate existing futures discourse with greater rigour, and to prepare to hold our own investigations to a deeper level of consideration. As a side effect, it can also produce materials that a wider audience may find useful.

Adopt-a-vision: think of it as a sort of guerrilla consulting engagement; a service to the public imaginary; a contribution to the future as a commons.

Last year, a team in my Experiential Futures course adopted a vision for WikiLeaks and devised a guerrilla futures project around it, set a generation from today.


The group that made this comprised five graduate students hailing from the Inclusive Design and Strategic Foresight programs at OCAD: Abid Virani, Anna Colagrossi, Chad Lesch, Courtney Cooper and Laura Mills. They lay out the story below (edited statements from project documentation).

Where did the future scenario driving the project come from?

Our final challenge was to select a vision of the future to materialise and enact for unsuspecting passersby [in downtown Toronto]. We thought about topics from ethical supply chains to creative commons, open source to democracy and accountability.

We tried to articulate the vision of Anonymous, but it was challenging to nail down a vision for such a decentralised and varied group.

In the end, we settled on WikiLeaks because we share the belief that transparency can help the public make better decisions and hold organisations and governments accountable for their actions. We chose 02040 as our time horizon.

What future vision did you uncover for WikiLeaks?

In this preferred future, people expect transparency from their governments, corporations and NGOs. Technology is ubiquitous and the public is highly educated and informed. People realise the power of their spending habits and wield that power to stand up against corruption and exploitation.

How did you arrive at a concrete situation from there?

Once we had a clear scenario in mind, we scouted locations. We noticed many empty storefronts and were inspired by the DineSafe signs on all the restaurants, then brainstormed how the role of WikiLeaks could develop and how companies might signal their transparency in the future.

We imagined that a transparency agency might emerge that would issue a well-known certification similar to Organic or Free Trade. We decided to call this organisation WikiAudits.

For the live portion, we decided to film a WikiAudits representative being interviewed by a local news station. The scene started with a WikiAudits Representative hanging a closure notice on a storefront and a news crew arriving for an interview. Our hope was to spark the curiosity of bystanders and engage them in a conversation about transparency and corruption.

How did things go on the day?

The day of the intervention was much colder than expected. We met at 10am and set up our home base at Little Nicky’s [a café near campus]. We spent the majority of the day filming and performed the intervention three times.

Despite some of the setbacks, we feel we built a well thought out and executed experience. 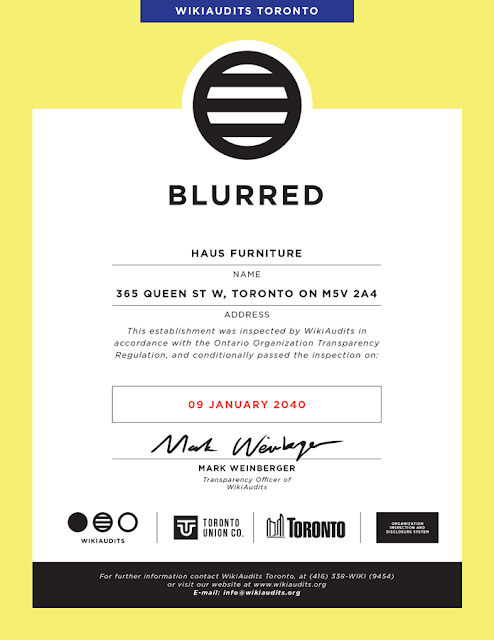 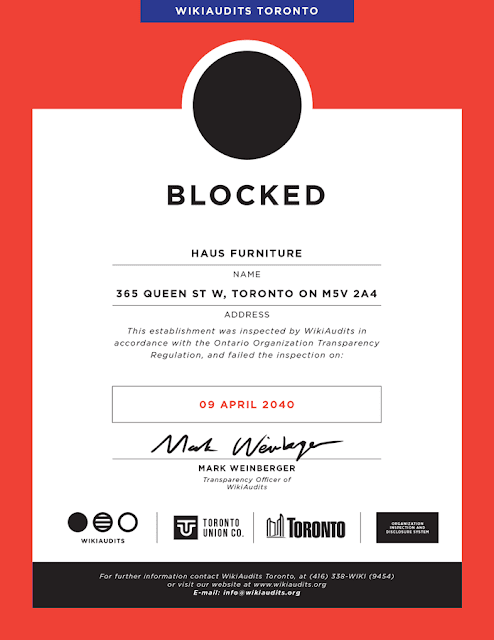 I was recently in contact with the group's videographer, Abid Virani, who observes that the scenario they developed, six months before the U.S. presidential election, is eerily on track –– starting with the footage incorporated into their video of the Boston Globe's monitory "front page from the future" set in April 02017. (This was an unusually creative attempt on that newspaper's part to warn of the possible adverse consequences of a Trump win, published in April 02016.)

"The newspaper depiction of deportations from America, riots amongst increased policing and gold curtains all look plausible for Sunday, April 9th, 2017," says Abid. But it's not all grim: "The idea of WikiAudits was plausible to us as well and the entire project reflects what I now see as an optimistic outlook of the future."

Turning to the lessons of the project more broadly, he adds: "The mere act of considering a possible future and documenting it allows us to understand the present with greater nuance, and it can inform us of how to navigate forward."

"There is no shortage of possible futures, but I suspect there is a shortage of energy put towards imagining them."

In a sense, Adopt-a-vision is an effort to generate and channel some of that missing creative energy towards public imagination.

It also seems to be a relative of political activist duo The Yes Men's signature move, Identity correction, described by Yes Man Andy Bichlbaum as "exposing an entity’s inner workings to public scrutiny". A key property that Adopt-a-vision has in common with Identity correction is a kind of ventriloquism; a tactic of assuming the mantle of an organisation, speaking in its voice.

But there are differences too. Identity correction often (not always) draws its potency from statements being mistakenly identified as coming from the target organisation. For Adopt-a-vision, the target org's public persona and statements are just a starting point; the intervention need not be taken to be authoritative in order to resonate.

A form of culture jamming, Identity correction has a critical agenda at heart, being usually applied to "some entity running amok". This can be immensely valuable, and some of my favourite guerrilla projects do precisely that (the Yes Men's New York Times Special Edition is a beautiful, multifaceted example; and their Dow Chemical intervention on BBC World in 02004 is simply staggering).**

Adopt-a-vision is not necessarily critical in the sense of requiring an entity running amok, or jamming in the sense of subversive. The approach is flexible: you might choose an organisation that worries you, or one with an agenda you wholeheartedly share. The point is not necessarily to propagandise for or against, but rather to use designed objects, performance, and film to ramify that entity's preferred future into a more granular hypothetical to think and feel with. In this way, you can aim for even greater depth of exploration of a future vision than the organisation itself might offer.

None of this, of course, guarantees any particular outcome. The ingenious future fragment created by Abid and colleagues, portraying a WikiLeaks spinoff that works locally to make companies ethically transparent at street level, may or may not be a likely trajectory.

But whereas a tactic like Identity correction is about revealing what is true, Adopt-a-vision is about probing what is possible. It's not a matter of prediction –– it's a matter of thinking through the possibility space by generating more detailed reference points within it, to see where those in turn could lead.

My thanks to Abid, Anna, Chad, Courtney and Laura for their work on this, and courage to vision adopters and future explorers everywhere.

* For more on using experiential futures to "hand an audience's assumptions back to them", see The Futures of Everyday Life, p. 103, note 224.
** For more on culture jamming and guerrilla futures projects, see TFOEL Chapter 5.

Related:
> Dreaming together
> The New York Times Special Edition
> What if unions were software?
> How to move to Canada (without leaving home)
> The technology of public imagination
> Impacting the Social
Posted by Stuart Candy at 12:15 am No comments: