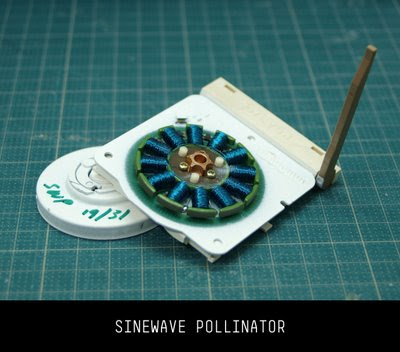 After bees became extinct in 2012 (the end of the Mayan Calendar), the future of flora has become uncertain. Many species have since become extinct, but other persist in labs through carefully monitored conditions and specialized nutrient diets.

Sinewaves of a very specific wavelength have been found to be an incredible pollinating alternative, but their effect on humans continues to be tested before the method receives approval.

Somehow some of these devices fell in our lap before approval. Be careful!

The Umeå Institute of Design, a top Swedish design school, recently held its Spring Summit 02009 on the theme Sensing And Sensuality. Students in the Interaction Design (IxD) graduate program there created some charming artifacts from the future as souvenirs for Summit speakers, which included such luminaries as Matt Jones and Adam Greenfield.

Kluged together from what look like pieces of decommissioned VCRs and other electronics, the wittily improbable stories accompanying these objects may tend to push them past design fiction, and towards what at first I mistook for design fantasy... 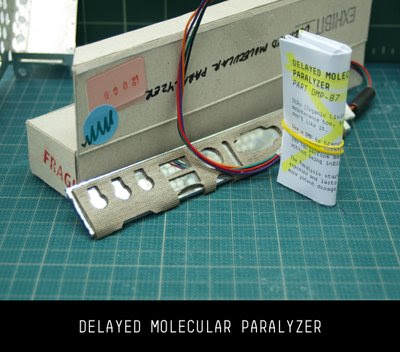 OLRs (Organic Living Robots) need maintenance too, but you well know they don’t like it.

Use a DMP to tranquilize them and stunt all cellular respiration momentarily so you can perform maintenance on them without being inflicted harm upon.

The Paralysis starts 3 minutes after exposure and lasts exactly 57 minutes. A more potent dosage unit is in the works. 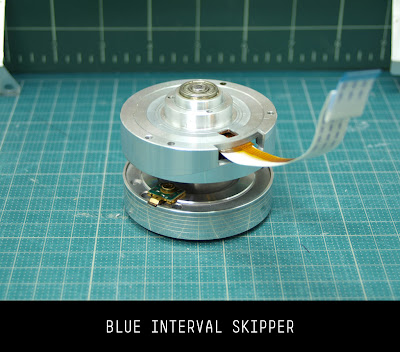 The proliferation of Blue-Ray DVDs led to the Blue Ray Catastrophe of 2015. How amazing that we humans hadn’t figured out that blue light causes retinal cancer!

The blue light leaks that led to that event were a wakeup call. You think you are safe now with blue light filters in all public and private environments.

Surely if you are reading this, you are an explorer of outlying territories. For that you will need this device if you treasure your vision.

This batch comes from a commando of new-era Brazilian territory surveyors. 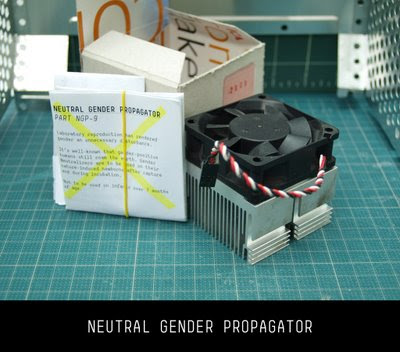 It’s well-known that gender-positive humans still roam the earth. Gender Neutralizers are to be used on their nature-induced newborns after capture and during incubation.

Not to be used on infants over 7 months of age.

But rather than design fantasy, or even critical design, for me these artifacts instead present as design parody.  Calling to mind the late science fiction author Arthur C. Clarke's maxim that "Any sufficiently advanced technology is indistinguishable from magic", these pieces joke about the mysterious, near-dysfunctional lack of legibility in advanced industrial design.

Being pieced together from found components, they also seem to deploy a 3d version of future-framing, because it's not their design per se that's at the heart of these objects, but the new mini-stories which accompany them. It's the refurbished backstory, the newly futurised context, the soul transplant via narrative, that brings them to life.

Been a huge fan of your blog. I'd forgotten about this post, but these objects were made by us for the Spring summit. Good times! and Great to see them being written about.

Would be a huge honor to hear more about your work sometime. Do you come to Sweden often?

Hi Rahul, thanks for those kind words.

I'd love to pursue the conversation when the chance comes up. I get to Europe often enough, but so far have been to Sweden just once.

Meanwhile, please do keep me informed of other work you guys do, or hear about, that would fit with the themes here!