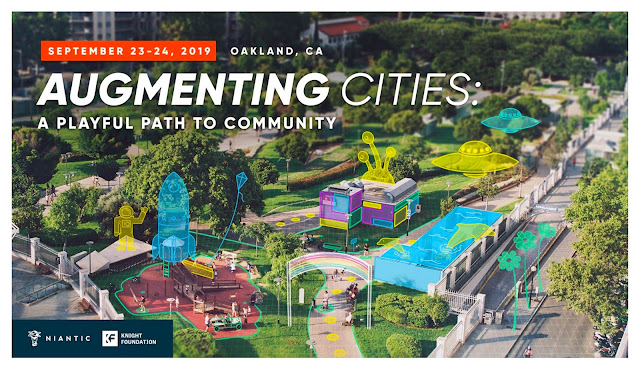 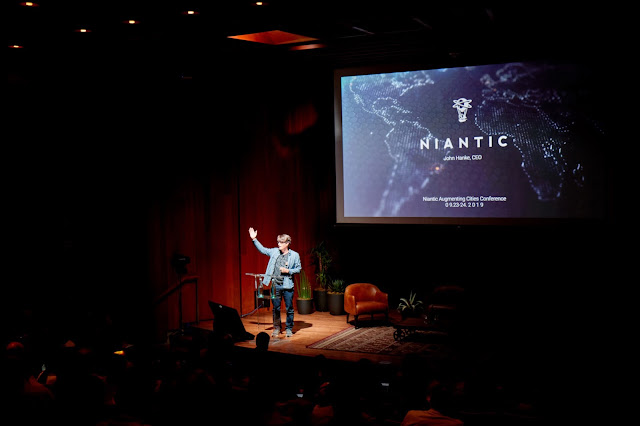 We were excited to take part in an invitational symposium a few weeks ago, Augmenting Cities, that brought together under one roof 150 game designers, artists and urbanists from a number of countries "to reflect on how people, cities, and technology will evolve and be shaped through augmented reality (AR)".

The gathering was convened by groundbreaking AR games company Niantic –– the folks behind Pokémon Go, Ingress and Harry Potter: Wizards Unite –– together with the Knight Foundation, a leading urban philanthropic fund. It was hosted at the Oakland Museum of California, itself part of a city that has recently seen rapid and far-reaching transformation through the Bay Area's latest tech boom.

As the event description notes, "Just as mobile communication and computing has altered the evolution of cities over the last 20 years, AR technology stands to fundamentally change how we connect with each other and experience communities for decades to come." But what might that fundamental change look like? 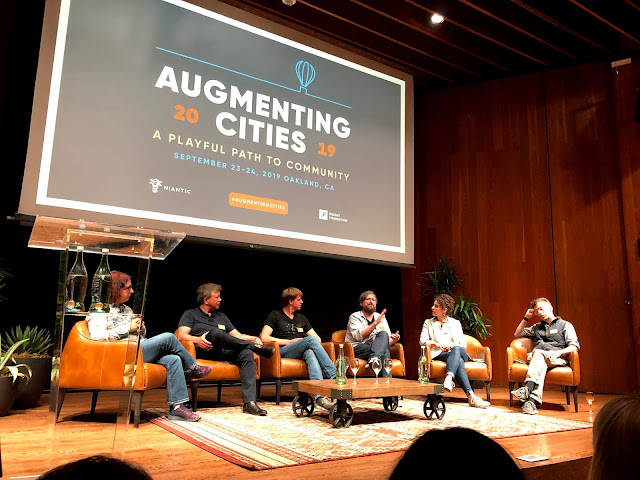 So on the back of two days of presentations and panel discussions by game and experience design luminaries, including Felix Barrett (founder of Punchdrunk), Sarah Brin (Meow Wolf strategic partnerships director), audio artist Duncan Speakman, game designer Katie Salen (UC Irvine), and Niantic founder John Hanke –– as well as our own Jeff Watson (director of USC Situation Lab) and Sitlab collaborator Jen Stein (creative lead at Experimental Design) –– we were asked to devise and run the culminating session, an afternoon's activity for all participants to explore possible futures in this area.

Our mission was to come up with a hands-on, playful, and collaborative intervention that would help develop not only deeper social connections among attendees, but also potentially actionable initiatives in this fast-changing urban AR design space. With around 150 participants and only two hours to get through generating, refining, selecting, and sharing out concepts, it was a worthy challenge.

I led process design and facilitation with a fantastic team made up of Stein, Watson, and CMU Situation Lab associate Ceda Verbakel. We realised that thanks to the venue's particular layout and the number of attendees, players would have to take these co-creative steps at the same time while sited in different locations. This helped to birth, at last, a project that had been gestating for some time; a self-contained facilitation kit. 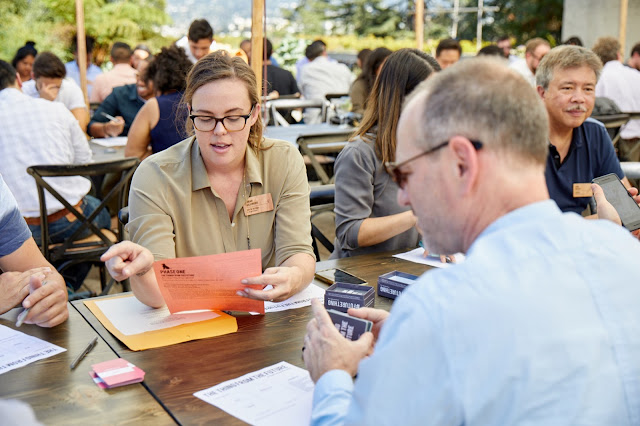 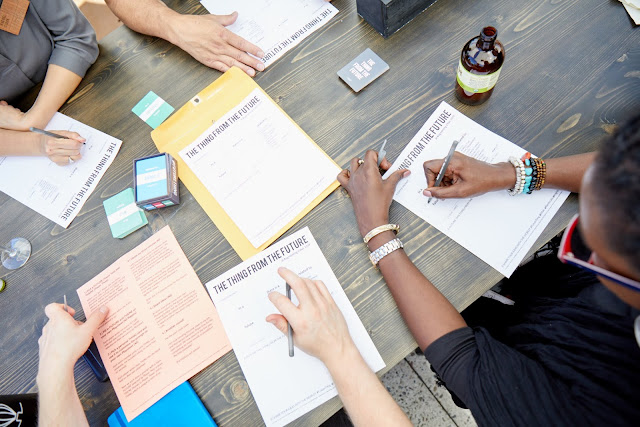 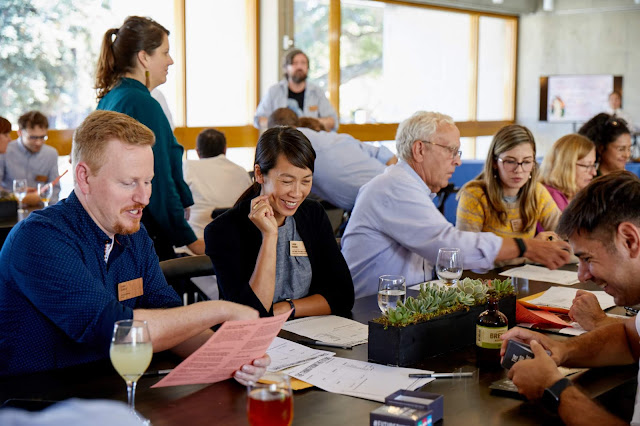 In teams of three or four players, future-artifact ideas were incepted using combinatorial prompts from a modified version of our game The Thing From The Future, with ideation rounds timeboxed at 3–5 minutes. This first phase allowed folks to explore in relatively open fashion to start with, and produced a wide variety of imaginative responses. In the second phase, each team selected two of their most promising ideas from the collection that they had generated together, surfacing some of their most thematically relevant concepts and provocations. They then partnered up with another team, to receive feedback and discover which of the two candidate concepts should be developed, in the third and home stretch of the Playshop, into a pitch or advertisement to share live on stage with everyone in the last session of the conference.

We at Situation Lab don't always have the time to write our projects up for sharing more widely, although we have featured at our website some of the gameplay approaches and variations developed over several years, and we continually partner with groups around the world, with a focus on values-aligned initiatives and organisations, to offer customised processes that scaffold rigorous imagination, co-creative exploration, and strategic conversation.

Last year for instance, we ran sessions or whole events in this design space with, to name a few, the Omidyar Group, Pennsylvania's Department of Education, Alaska's Cook Inlet Tribal Council, Mexico City's Laboratorio para la Ciudad, the Association of Professional Futurists, and Institute for the Future (IFTF) with the World Bank Climate Investment Funds. In 02019 so far, Sitlab has collaborated with, among others, the Skoll World Forum on Social Entrepreneurship at Oxford University, NASA Jet Propulsion Laboratory, Stanford d.school, the Obama Foundation, the British Broadcasting Corporation, the brand-new Pittsburgh high school City of Bridges, and (in collaboration with IFTF's Governance Futures Lab) United States Conference of Mayors gatherings in Austin and Honolulu.

This post is prompted by a desire to share a bit more of what we've been doing, and more particularly by the terrific energy generated in this initiative. For more information on Augmenting Cities check out the event webpage, overview (pdf), and recap. 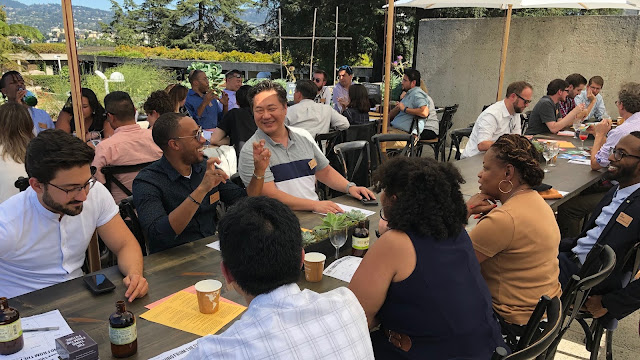 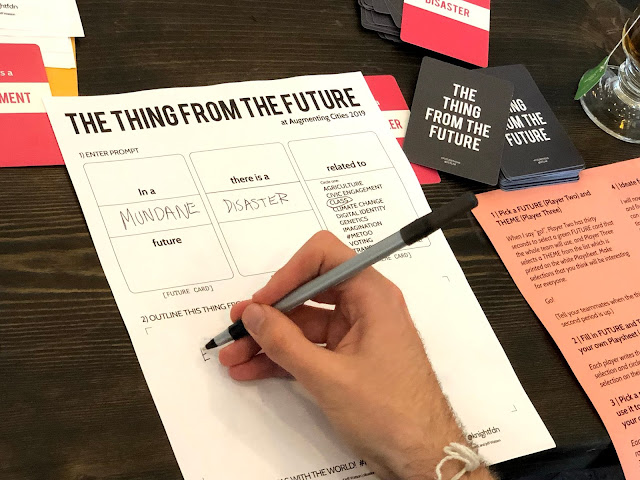 Many thanks to our fantastic Playshop participants, to our awesome facilitation team, and to Niantic and Knight Foundation for spearheading the initiative.

We look forward to further developments in this exciting and fast-moving area, and find it hopeful that processes like these –– supporting rigorous imagining in emerging design spaces, as they are being explored and mapped –– are rapidly finding their way into many organisational and community toolkits, to help new ideas and their implications come into focus.

Related:
> Bringing Futures to Stanford d.school
> On Foresight in Organisations
> On Getting Started in Experiential Futures
> The Thing From The Future / Sitlab project page
> Gaming Futures Literacy (article)
> Transforming the Future (book)
Posted by Stuart Candy at 2:08 pm