In San Francisco yesterday, on a day-long layover between Hawaii and Switzerland, I learned about this ingenious campaign called "Prepare Bay Area", recently launched by the American Red Cross Bay Area Chapter (ARCBA) to raise the public profile of disaster preparedness in this earthquake-prone region:

The last statistics out of the USGS predict that there is a 62 percent chance that a catastrophic earthquake will hit the Bay Area in the next 30 years—leaving an estimated 3,400 dead, 63,000 seriously injured, and over 400,000 people homeless. These statistics and the staggering realization that only a small percentage of Bay Area residents are actually prepared for an emergency prompted the ARCBA to focus on an even edgier campaign that would shock, force people to think, and then take action to get prepared.

"People may ask why we're doing this," said [ARCBA Chief Executive Officer, Harold W.] Brooks, "but it was necessary to send a bolder, edgier, and louder message because folks just aren't listening. So we shifted our campaign by adding provocative billboard images, edgy TV and radio spots, and some innovative street marketing in the hope that it would motivate people to respond now—not tomorrow—and we believe our message will be heard." (ARCBA Press Release, 2 March 02007)

The photographs below record the first of a series of public consciousness-raising interventions put together by the Red Cross, together with advertising company Publicis & Hal Riney: a two-sided mobile billboard parked on Market Street, in front of the Ferry Building. 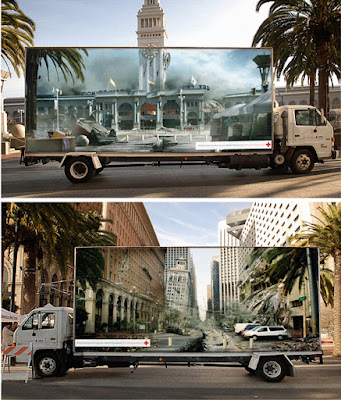 I have to say, I find this piece of work utterly brilliant. It's an exceptionally important message for the busy residents of a vulnerable city, and it also happens to be an inspired piece of urban art... far more compelling (not to mention comprehensible) than, for example, this quirky, innocuous ad of similar, commendable intent, which I snapped in a MUNI bus yesterday. 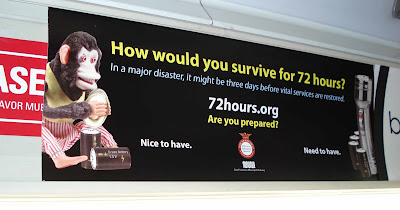 The mobile disaster billboard is also a noteworthy example of ambient foresight -- feeding forward scenaric imaginings to "present" a possible future. (The Wired/Metrophile blog where I obtained the billboard shots above also shows some of the other viral/guerrilla tactics the Red Cross has deployed to get its Public Service Announcement heard.)

Last year, while marking the 100th anniversary of the 01906 San Francisco earthquake which levelled the city, a Red Cross survey found that most residents today remain seriously underprepared for this kind of emergency-- so I'm interested to find out more about how this course of future-shock therapy (thanks Jake for that phrase) is being received. For instance, in what kind of proportions has the public reaction evinced anger/denial as opposed to concern/engagement? Images of unwelcome futures, even propagated with the best intentions, will not necessarily be taken in good part...

In other news, meanwhile, with classes in Hawaii done for the 02006-07 academic year, I'm on my way to my first summer session at EGS in Saas-Fee, Switzerland, where I'll be for most of June. I'll be back at the Long Now in San Francisco during July.
Posted by Stuart Candy at 6:19 pm

Powerful spotting, Stu. Be sure to have the fault lines mapped for my visit at July's end.

Several riverfront towns along the mighty Mississip commemorate anomalous flood levels with "high water mark" plaques on building exteriors. On one hand, they seem to profess the survivability of disasters. On the other hand, maybe grandma had the right idea covering that green floral couch in impermeable plastic?