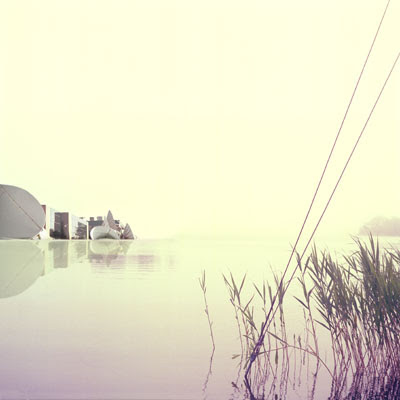 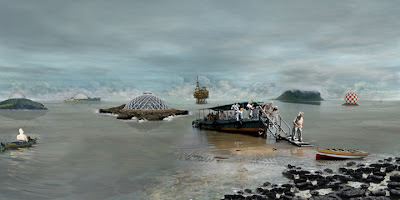 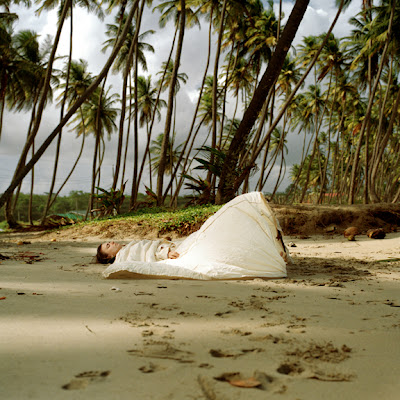 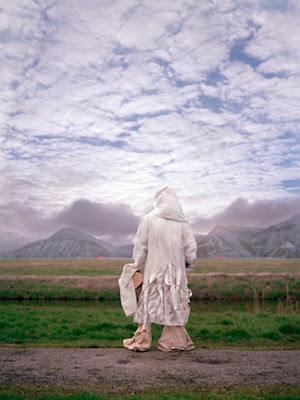 This week, while searching for visualisations of future cityscapes, I encountered for the first time the work of American artist Mary Mattingly. Mattingly produces astonishingly beautiful images that moodily, and seamlessly, blend landscape photography with future-inflected human subjects and dwellings. Her website is replete with these gorgeous shots, some of my favourites shown above. Most appear to be part of a strand she calls Second Nature; "a name that articulates a point in time of my ongoing work. This work continues, through photography, sculpture, video and podcasting."

The last of the images above, "The New Mobility of Home" (02004), was featured in an exhibition called "Ecotopia" at the International Center of Photography last year, which I came across via this Scientific American blog post referring to "surrealist depictions of a semi-post-apocalyptic future". That post links to a New York Magazine article and a review in the New York Times (check out the audio slideshow). From the Times piece:

"Ecotopia" might be described as "An Inconvenient Truth" in exhibition form. It is a tale of beauty and devastation told by nearly 40 photojournalists and artists. Their viewpoints vary, as do their subjects and forms, but you rarely escape a sense of nature's vast, incalculable richness or of photography's ability to do it justice. There may be no greater meeting of subject and medium.

Interesting to see Mattingly's work drafted here under the rubric "photography", which doesn't quite seem to do it justice. From an interview with Mattingly transcribed at her website::

In my artwork I will use any medium to realize an idea, however, I usually finalize a piece through photography, video, or sculpture because these mediums, to me, allow for a direct translation of reality or of a created real-space and because they either represent the world around us or sit in the world around us, they carry a truth. Photography and video have an inherent honesty – we continue to want to believe what looks believable. Manipulating "reality" within these mediums to create futuristic scenes allows for the ability to provide latent meaning. Indelible, purposeful and fantastic.

In a sense, the narrow, documentary connotation of the label and practice of photography, conventionally understood, are part of where these plausible-yet-fantastic vignettes draw their strength. The visual codes of photorealism are belied by seemingly impossible (futuristic) subject matter.

Asked about these futuristic themes, she elaborates:

My work has always been an interleaving of the past, present and future, understanding that the future is imminent and immanent. I have always practiced some form of future scenario-planning, and have always been environmentally and politically concerned in my life and art. Out of everything that interests me, some things tend to frighten me, and the things that frighten me tend to eat away at me. It is those things I usually end up making work about.
[...]
Kurzweil states that, with the exponential acceleration of development in technology and so-called progress, the human condition will reach a point when we can no longer process our environment from our present perspective as the accelerating speed of growth outpaces our faculties. However, Bertrand Russell made an excellent point, saying that if the bath water got only half a degree warmer every hour, we would never know when to scream.
[...]
Kurzweil is predicting singularity as a future happening, but as far as I can tell, it is already here and will continue to grow.

The prolific Mattingly's labyrinthine website is intriguing to explore, and contains detailed photographic records as well as written (esoteric, theorist-sprinkled) statements for her varied, and frequently interwoven, projects, as well as critics' responses. She fearlessly develops a wide-ranging and idiosyncratic vocabulary -- conceptual, visual and verbal -- with projects including a Spatial Lexicon (a "Dictionary for functioning in a New Space"), New Time (a proposed "universal time scale without confusion"), and the Waterpod™ (billed as "a completely sustainable, navigable living space"). She also has a statement specifically addressing The (Kurzweil) Singularity, including this observation:

When people are imbedded with different forms of technology, from the wireless to the plastic to the drug, and when we procreate solely outside of the body, we just continue the abstraction from nature and person that began before the Greeks invented the cosmos.

Of all the work I've seen at her site, aside from the images above, I especially like the Wearable Home, designed for nomads, including a substantial future cohort of environmental refugees -- and downloadable patterns for producing your own.

Altogether, there's an interesting mixture of deadly seriousness and playful irony in this body of work, which from my point of view is highly appealing. With a freewheeling combination of lyricism, tragedy, hopefulness and wry comedy, it's hard to peg Mattingly down. Such are the tightropes the futurist needs to walk, and she does so with skill and grace.

Which brings to mind the words of my mentor, Jim Dator:

Should I be optimistic or pessimistic about the future?
I believe the answer is: neither. I should be aware and active.