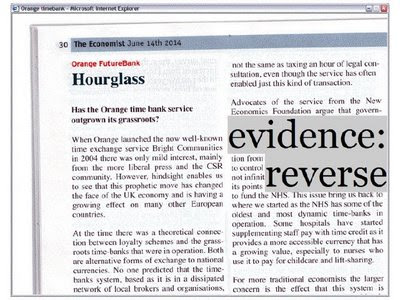 "Evidencing": a 02003 slideshow by service design consultants live|work features a fragment of press coverage about a hypothetical "Timebank" service offered by their client, Orange, in 02014
Some months ago, an old post at Victor Lombardi's blog Noise Between Stations (previously mentioned here) led me to a piece at Worldchanging about "Future-making", in which Alex Steffen started on a kind of catalogue of "available tools for making better futures". One of his headings was "Design and prototyping" and it contained a link to an earlier note, back in May 02005, about "Evidencing".

This is a practice, pioneered by British "service design" firm live|work, whereby the various components of a proposed service design may be rendered in tangible form (unlike in product design, such prototyping is neither obvious nor typical as a stage in creating services). The Worldchanging article pointed to a live|work case study conducted for multinational communications company Orange:

The live|work team developed a range of artefacts -- the touch-points of services, such as magazine articles, packaging, web sites, newspaper advertisements, letters and television news items -- that animated the assumptions and differences in strategic outlook uncovered from within the business.

These artefacts acted as 'tangible evidence' of future service touch-points, and were used as discussion points and provocations for the Innovations team.

Product manufacturers use form models and prototypes to represent concepts and aid the decision-making process. Service companies often lack equivalent tools and processes, as there is no single product to focus on. Although services themselves are intangible they are accessed and experienced through a number of touch-points. By creating 'concept touchpoints' that act as evidence we are able to bring the service experience into the decision making process.

(Although the original link is no longer live, the above quote was accessible through the magic of Internet Archive's Wayback Machine.)

That case study document directed any jargon-puzzled readers to a brief "Service Design Glossary" illuminating the company's terms of art (service design, evidencing, touchpoints, etc): the original is archived here, while a more comprehensive version is now live at servicedesign.org.

Now, I mention all this, firstly, because the vocabulary used here, albeit with intentions clearly oriented towards the business-consulting (vs artistic-political) end of the design spectrum, is otherwise functionally compatible in every detail, philosophical and processual, with the approach to creating experiential futures that we developed independently. (That is, without ever having heard of each other, they and we arrived at quite similar processes for evoking bits and pieces of future experiences. ) The creation of The Bird Cage intervention, for instance, part of FoundFutures:Chinatown, involved our "evidencing" a moment of future-history; a flu crisis set in 02016-17, from outbreak to aftermath. From the scenario we had created came artifact concepts, then tangible objects produced and distributed in the streets. All this was done with a view to evoking the hypothetical event through the kinds of fragments, traces or "touchpoints" that it could leave in its wake (including "missing persons" posters, official quarantine notices, fly-by-night business brochures, and a memorial plaque cast in bronze).

Their current glossary's definition of "evidence" says, in part:

Evidence can represent the effects of possible designs as much as the design of the service itself. Therefore evidence are [sic] not only core service touch-points, but often third parties’ response to an service such as newspaper articles describing the results of the service.

Evidencing, or the making of evidence from the future, can be used as a rapid way to prototype future service experiences. You can use the evidence as a stimulus with users or in Roleplay to test the ideas. This type of "archaeology of the future" enables service providers to make early qualitative judgments about the implications of a design. Ultimately it allows customers and collaborators to "play back" their own assumptions as concrete experiences rather then abstract evaluations.

The notion of playing back assumptions in concrete form, in order to engage participants more deeply than abstract, or superficial, ideology-based conceptions of the future would allow was precisely the idea behind the "Hawaii 2050" experiential scenarios (although we had the added goal of doing so for several deliberately divergent scenarios at once, emphasising alternative possibilities). Also, the above term "archaeology of the future" is extremely similar to "reverse archaeology", a concept we've been using to describe the process of generating such evidence -- "whereas the archaeologist must deduce the 'world' from the 'fragment', we as multimedia futurists deduce the 'fragment' (or fragments) from the 'world' expressed in the scenario".

However, the proximate reason for noting these connections here, lo these many months later, is that in the past week I've become aware of San Francisco-based service designer Jeff Howard's blog, Design for Service, where he recently used the term "evidencing" to describe the wonderful New York Times Special Edition, alongside another, much less wonderful, anonymously mocked-up image of a "future" USA Today front page. The latter was fore-dated 1 February 02009, and circulated via email prior to the 31 January election of the Republican National Committee chair. I have no idea how big a part it played, but the candidate implicitly criticised in the fake news story didn't win. 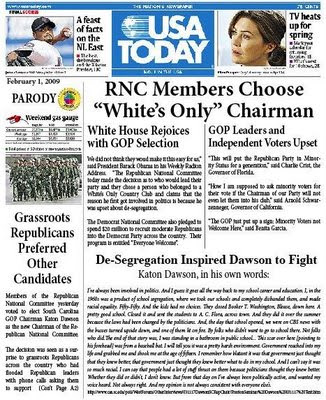 Parody USA Today front page
Image via The Plum Line blog, 26 January 02009
(Some interesting recent comparators for the above bit of politically-pointed nearcasting can be found here and here.)

A nice earlier post from Howard's blog tries to excavate the origins of the term "touchpoints", and two others address service evidencing; the latter linking to what he called "the only really clear, public example I’ve found" -- which was by none other than Lavrans Løvlie and colleagues at live|work; a presentation in 02003 at Doors of Perception East of the project they did for Orange! (The source of the image at the top of this post.)

And finally, to close the loop, I've just this evening found a post called "How design evolves", blogged by Doors organiser John Thackara (on the same day as Steffen's post at Worldchanging), which noted that Interaction Design Institute Ivrea alumnus Jason Tester was then introducing "artifacts from the future" into the mix at Institute for the Future. (As an aside, I want to acknowledge a very helpful conversation with Jason around the time that Jake Dunagan and I were working out our ideas for "Hawaii 2050", back in summer 02006.) Anyway, Thackara goes on:

At Ivrea, the design of enticing representations of imagined futures was regarded as a core process, and a technique was introduced there by the English service designers Live|Work. Live|Work called their technique evidencing. One of the roots of evidencing, in turn, was the development by Tony Dunne [bingo] and Bill Gaver of "cultural probes" at the Royal College of Art during the late 1990s (where the Live|Work guys studied interaction design). [Aha!] I don't suggest that a linear history is playing out here - but every now and again in the chaotic blizzard of life one briefly glimpses tracks in the snow.

Footprints. Evidence of the journey so far.

Hi,
Fascinating post! I was privileged to see the tangible evidence that Livework made for us at Orange and have seen other versions of evidencing subsequently.
A caveat is that this technique can easily tip over into spin. For example, I saw a set of videos with "customers" telling how a yet-to-be-launched service had changed their lives. They were great actors convincingly staged in real locations, but the experiences they described were too good to be true.
It's the rough edges in the "evidence" that maintain its authenticity and stimulate refinement of the service concept.
Regards, Matt