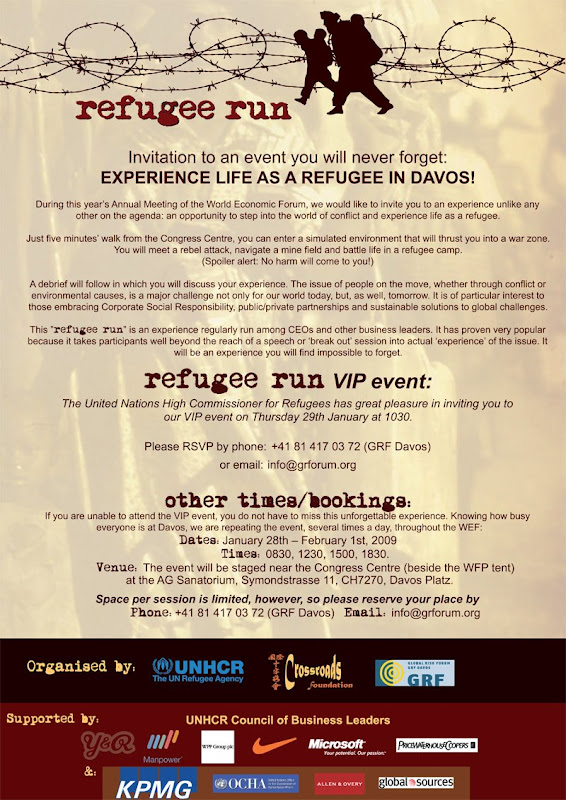 Invitation to Refugee Run, Davos 02009 | via Aid Watch
Late last month, NYU economics professor William Easterly blogged about an invitation he received for an unusual event in Davos, Switzerland, from the United Nations High Commissioner for Refugees. From the invitation text:

During this year's Annual Meeting of the World Economic Forum, we would like to invite you to an experience unlike any other on the agenda: an opportunity to step into the world of conflict and experience life as a refugee.

Just five minutes' walk from the Congress Centre, you can enter a simulated environment that will thrust you into a war zone. You will meet a rebel attack, navigate a mine field and battle life in a refugee camp. (Spoiler alert: No harm will come to you!)

Sounds pretty interesting to me.  But Easterly, a noted foreign aid and development expert, was unequivocal in his disdain:

Can Davos man empathize with refugees when he or she is not in danger and is going back to a luxury banquet and hotel room afterwards? Isn’t this just a tad different from the life of an actual refugee, at risk of all too real rape, murder, hunger, and disease?

Did the words "insensitive," "dehumanizing," or "disrespectful" (not to mention "ludicrous") ever come up in discussing the plans for “Refugee Run”?
...
Of course, I understand that there were good intentions here, that you really want rich people to have a consciousness of tragedies elsewhere in the world, and mobilize help for the victims. However, I think a Refugee Theme Park crosses a line that should not be crossed. Sensationalizing and dehumanizing and patronizing results in bad aid policy – if you have little respect for the dignity of individuals you are trying to help, you are not going to give THEM much say in what THEY want and need, and how you can help THEM help themselves?

To be fair, it does seem wise to question the bona fides of such an unusual attempt to bridge the world of the high-paid executive to that of the global refugee underclass, 42 million strong. Perhaps portions of the ("VIP event") invitation's wording lent it to misinterpretation as a "dehumanizing" exercise. Certainly, the WEF's annual invitation-only gathering of global business leaders at a Swiss alpine resort is not infrequently accused of complicity in the large-scale problems it purports to address, and indeed one could go further along these lines, taking the "development" paradigm in general to task, for selling to the world's poor a tissue of "used futures" (the memorable term of futures scholar Sohail Inayatullah).

So, no doubt the concerns Easterly voices are sincere, but based on the additional information I've been able to find, such as this description by the event organisers, Refugee Run doesn't seem in any way to deserve such unsparing criticism. Like him, I didn't attend the simulation, but I have done some background research (an approach the critics appear to have eschewed) and it comes off looking quite different on closer inspection.

It was not designed solely for the Davos audience, but is in fact one of several "Life X-perience" role-playing simulations developed by the Crossroads Foundation, a nonprofit organisation based in Hong Kong. Their Crossroads Global Village facility regularly stages a range of activities in this vein -- AIDS X-perience, Blind X-perience, Level Playing Field, and others -- intended to "allow participants to walk in the shoes of those who battle global need". Refugee Run, along with Slum Survivor, is given an Intensity rating of ten out of ten.

Check out this news clip (~4 mins) from the Wall Street Journal...

My own impression is that an experiential taste of refugee life, if combined with a genuine will to compassion -- a key ingredient which cannot be simulated -- could be highly thought provoking in the best sense. It's no substitute, to be sure, for actual lived experience in fear of violence, disease, rape, starvation and pervasive alienation; but by the same token, is bound to be much more effective than any number of speeches, statistics, or videos.

It's interesting to me that some find this bold initiative to be in such poor taste (check out the numerous comments to the original post, which include plenty of readers scandalised on the strength of Easterly's description of the event, as well as some thoughtful replies by folks who have actually taken part in it).

I find myself wondering whether simulation and role play can seem unequal to the task of engaging consideration of serious issues, and thus attract easy scorn, in the minds of those for whom, for adults, at least, they remain peripheral and undervalued forms of learning; especially in some academic settings. For them, perhaps, on hearing about an experiential or immersive scenario, the most readily available analog is what they consider frivolous entertainment; yielding, in this case, the sadly dismissive notion of a "Refugee Theme Park", which, it follows, "crosses a line that should not be crossed".

The net effect is a misunderstood, and so missed, opportunity. As I see it, that opportunity is to address, not just rhetorically but actively, a profoundly important question -- posed by Easterly and quoted at the start of this post -- about the limits of empathy.

(via Perspective 2.0, "Taking experience design too far?")
Posted by Stuart Candy at 9:19 pm