Futures in the flesh 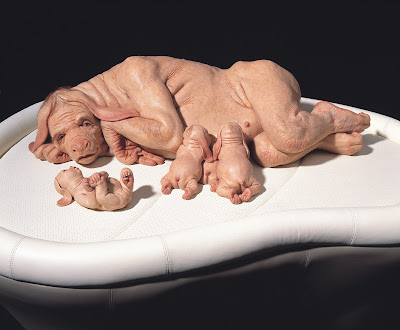 Patricia Piccinini, The Young Family, 02002-03
silicone, acrylic, human hair, leather, timber
Image via Brooklyn Museum
Readers, stumblers, netizens: I have been up to my eyeballs in dissertation research and general end-of-year craziness, but the sceptical futuryst is still, let me assure you, a going concern. Having defended my PhD proposal on Monday this week, I'm now back and hope to share a few more thoughts with you before the final encroachment of silly season.

This post is a bookmark to my favourite recent finding in the futures/design/art space, which came via a book, translated from German and published this year by MIT Press, called Insatiable Curiosity: Innovation in a Fragile Future. It's the work of Helga Nowotny, a scholar in social studies of science and technology. I don't intend to review it here, but it's one of those alternately heartening and frustrating works that, apparently oblivious to the existence of the futures field, tries to reinvent it.

p. 2: The future is. Its content, its shape, and its fullness -- the images we construct of it -- always have significance only in the here and now.

p. 4: This ability to claim the future for oneself is a cultural resource and should be made available also to those who currently do not have it, like the poor in the developing countries.

p. 7: Conceiving the future -- conceiving it differently -- demands that we escape the polarities of utopias and dystopias and replace them with other images that are neither taken directly from science fiction nor fueled by media-staged apocalyptic or superhuman fantasies. ... Conceiving the future means examining the assumptions on which it supposedly rests.

p. 110: Today, speech about the future is in the subjunctive mode. The term future rightly ought to be used in the plural, even if our language resists.

Patricia Piccinini's artful figures consciously cross the boundaries between humans and animal species. She creates monsters whose familiar human characteristics disturb and speak to us even while they appear in an alienated form. She arouses the viewers' curiosity, a curiosity that follows two separate paths at the same time. One path leads to the created object, which is alien and familiar to us at the same time. The other path leads back to ourselves, for looking at the object nourishes our suspicion that science's conscious and intentional manipulations could one way also make us humans take on such an alienated form, just as the artist has done with her mutated form produced from silicon, acrylic, human hair, and leather.

The footnote to that paragraph cites Piccinini's 02003 exhibition We Are Family, Australia's contribution to the 50th Venice Biennale. We Are Family included "The Young Family" (see photo at the top of this post), among other works by the artist. From Linda Michael's catalogue essay [pdf] for the exhibition (p. 5, emphasis added in bold):

Over the last few years, Piccinini has nurtured a new animal, the Siren Mole or SO2 (named after the scientifically produced 'Synthetic Organism 1', or SO1).
...
After talking with zoologists and ecologists about her beast in its various forms, Piccinini was keen to create a new improved version – one capable of reproducing itself. The next stage in its evolution is SO3, the theoretical 'scientific' name for Piccinini's creatures in her sculpture The Young Family.

The mother of this family lies on her side like a big sow with a litter of suckling pups, her humane face the subject of one stray pup's wide-eyed attention. Despite her status as a new mother, she is old.
...
The sculpture's verisimilitude, and the fact that today science fiction becomes fact so rapidly, makes it conceivable that this creature exists in the world. In it the differing physical attributes of youth and age are portrayed with commanding realism. Yet though its form is realistic, its content is improbable. It is a highly defined representation or surrogate of something. But of what? 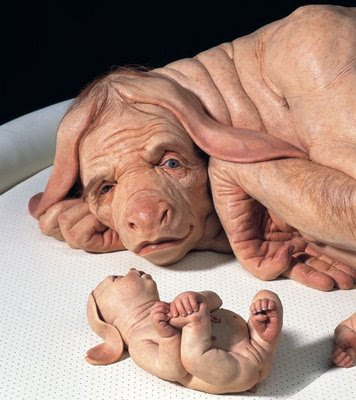 Detail from The Young Family
Featured in We Are Family, Venice Biennale 02003
Image via Australian Journal of Emerging Technology and Society 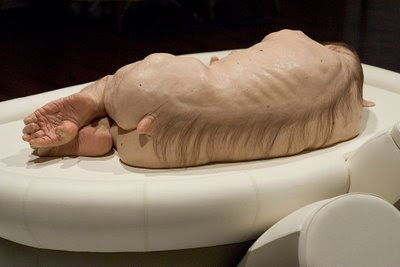 Reverse shot of The Young Family
Featured in We Are Family, Venice Biennale 02003
Image via Giant Ginkgo's Flickr photostream 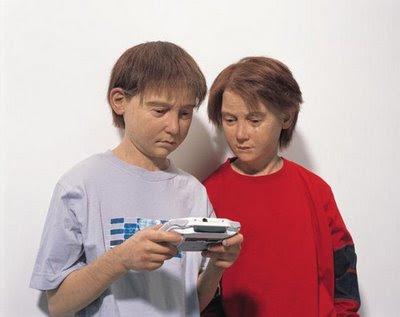 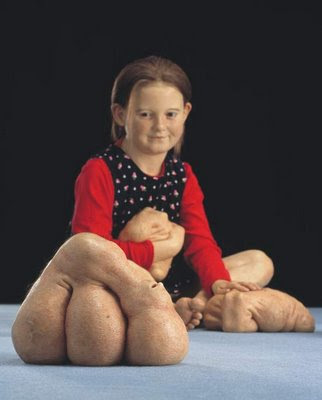 What the tableaux within this exhibition offer us are visions that encapsulate contemporary dramas, with all their contradictions. This is no less than a model of reality or truth: 'In my work I am primarily interested in creating real experiences for people, experiences that touch people ... bodily but both intellectually and emotionally. No matter how artificial or unreal the stuff that constructs these environments is, these spaces always constitute a reality and evoke real experiences'.*

Piccinini's work engages us because it does not take sides, though it draws from the conflicting emotions that underpin our fascination with genetic engineering. Her works give imaginative life to a potentially scary future, while also asserting the redemptive power of social values and relationships. Our horror of humans combining with other species, for example, is considerably softened or sidetracked by the image of Piccinini's profoundly weary and patient trans-species mother suckling her young.

We are thus confronted with an expanded idea of the real – with alluring and original creations where truth has primacy over appearance. Though they may be in some way failed or mutant creations, her figures have a kind of innocence that makes it easy to see beauty in the grotesque. We are free to imagine new futures that are unconstrained by outworn social philosophies. Piccinini always does this in a way that makes such futures understandable in terms of what we encounter in everyday life. 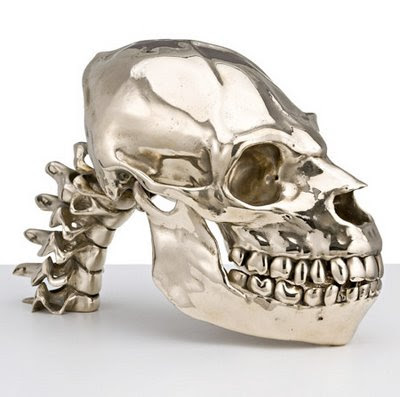 Patricia Piccinini, Not Quite Animal (Transgenic skull for the Young Family), 02008
bronze | Image via artist's website 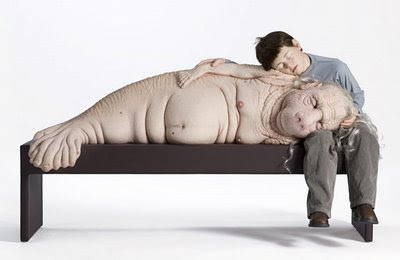 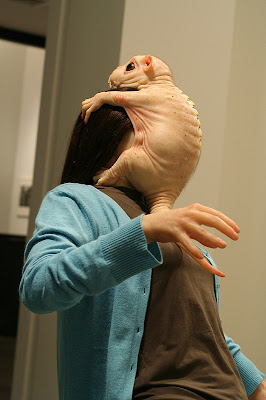 Patricia Piccinini, The Embrace, 02005 (Nature's Little Helpers series)
silicone, fibreglass, human hair, plywood, leather, clothing
Image via artist's website
While gathering images for this post I came across an intriguing case of "The Young Family" being "debunked" at urban legends website Snopes, one person or several evidently having seized the opportunity to fabricate tabloidlike trans-species scandal stories based on photos of the sculpture.

The fact that it lends itself to such misinterpretation is a clue to the power of Piccinini's work, which for me comes very close to realising an emerging ideal for future artifact creation; the epistemically ambiguous dramatisation of scenaric potential.  That is, we may be entirely aware of their artifice (no deception required; they do appear in art galleries after all), and yet it seems that the "real experiences" of encountering her hypothetical creatures can provoke genuine insights in relation to configurations of the future landscape of -- in this case, biological or genetic -- possibility.  Life is pretty damn weird anyway, truth be told, so whatever's deemed natural about it is a function of taste, and especially that to which we're most accustomed. These sculptures seem to embody the ethical complexity (and the threat of simplicity) inherent in genetics research-driven technosocial change, far more effectively than thought experimentation or arguments from principle can. To my mind, transgenic "monsters" -- shadow-puppets projected with the false illumination of baseless moralising -- vanish in the light cast by imagining specific futures; and these strange Others start to be recognisable, with the rest of us odd creatures, as life. 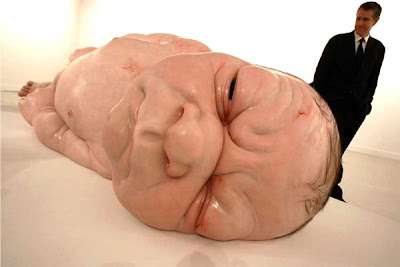 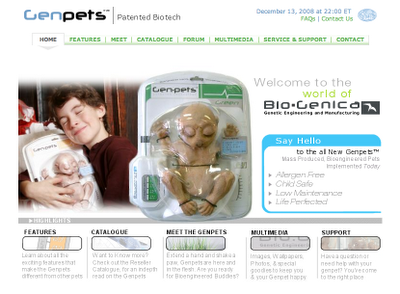 Image from Nanotopia (02006) by Michael Burton, RCA Design Interactions
Related posts:
> Your destiny is no longer in question
> How future-shock therapy works

Wowie zowie, congrats with your wonderful site - gave it a mention on http://snaporaz.posterous.com/plastic-people-22 - enjoy