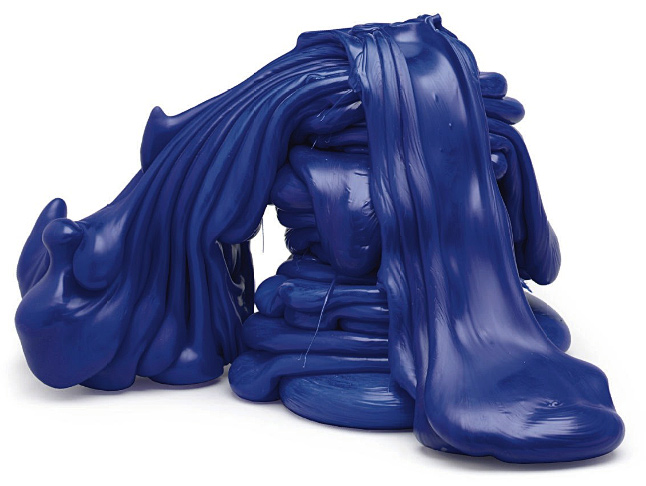 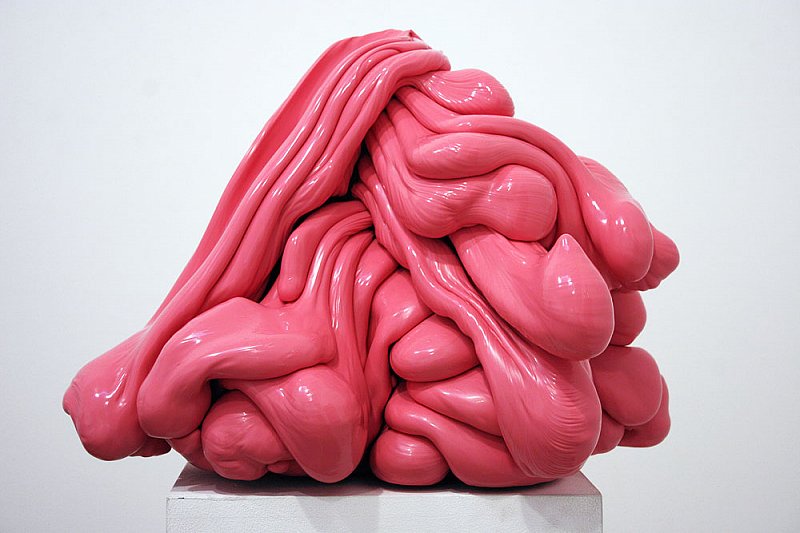 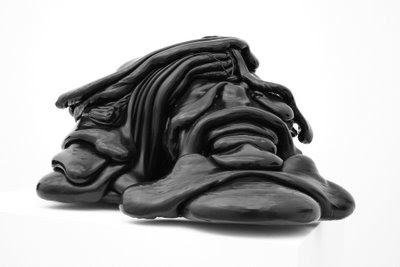 The sculptures pictured above are by U.S. artist Roxy Paine, and these images come to us via a beautiful online gallery of sorts: but does it float. I went there looking for something else and found this.

However, what I love here doesn't reside exactly in the art itself, but in the dimension added to it through the associative caption about nanotech, copied in at the top of this post. This seems to be a contribution of site co-curator Folkert Gorter (whose name I've just recognised; he's the designer of the Space Collective website, previously blogged here). At a stroke, his imaginative label recasts the misshapen products of Paine's SCUMAK (Auto Sculpture Maker) as artifacts from a nanotech future. Instead of (or in addition to) seeing what may originally have been a comment on the automation of art, we're invited to see fragments of some kind of lab experiment in self-replicating machines gone horribly wrong.

This seems a sort of inversion of the perceptual shift from ostensible reality to sculpture which we saw here a few days ago.

Now, since attempting a full-scale experiential realisation of a future world is not only impossible, but also unnecessary (recalling the Borgesian map that's the same size as the territory), from the point of view of a futures experience designer aspiring to manifest more with less is a good rule of thumb. I have said a word or two before about the iceberg principle that my collaborators and I use in crafting future artifacts: if there's another way, why make the whole iceberg? "The more effective-yet-cheap a prototype can be, the more efficient and pared-down a model it is for the scenario in question." In other words, the trick is to discover, then create, the most revealing possible evidence of the future world you are trying to convey.

Among future-artifact design desiderata, cheap and easy is, if not best in any absolute sense, probably better than expensive and difficult. (As usual, Cascio nails the point, in a post about artifact production on the cheap over at Open the Future: "do not underestimate the memetic power of good photo editing skills and a quality color printer". Some examples.) What more elegant solution in this vein than simply to relabel, recontextualise and thus reorient perceptions around some extant element of the mediascape? The still images captures something of the world, and a new caption may recapture it to a different end.

A term I want to suggest as apt here, borrowing a little from Lakoff's linguistics, is reframing the image. With a well-wrought future-frame around it, an old image may be put to work anew, in our minds and discourse, serving as a makeshift theory object for our collective contemplation. We've seen this strategy at work before in the World without oil photo essay.

But a different angle on it comes from an observation David Byrne made several years ago [my emphasis]:

In thinking about graphic design, industrial design, and what might really be the cutting-edge of design, I realized it would have to be genetic engineering. Dolly (God rest her soul) represents the latest in design, but it is, in her case, design we cannot see. Dolly looks like any other sheep, which is precisely the point. The dogma of some graphic designers is that their work be invisible. This perfection has been achieved with Dolly. 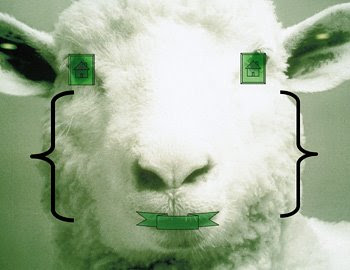 Notwithstanding the fact that Dolly has already passed into history, the cloned sheep image helps illustrate the type of creative operation I have in mind: Consider a picture of a regular sheep (yes, any sheep will do). Now imagine that it's a clone; add that label to it in your mind. The label -- or maybe what I really mean is the narrative for which it stands in -- recontextualises the image, futurising it, transforming it, semiotically, and thus experientially, into something else. Byrne's idea of "design we cannot see" invites a different way of looking. However, rather than scanning for invisible "facts" that we might suppose are "really there", we could instead scan for invisible potentials, future-frames, hidden stories, with a view to excavating them. What possible narratives might be read and infused into the images we find around us?

The juxtaposition of a future-framing narrative with a present-day image seamlessly retrofits the image as a glimpse of a scenario yet to come. The limitation is that it confines us to extant imagery, and there's surely much more to be imagined and created that doesn't have a ready precursor or analogue among ingredients presently available. Still, as a genre of futures exercise -- practice in a certain way of seeing -- it strikes me as interesting; and with this, I'm forced to wonder whether the cheapest and most elegant future artifacts aren't perhaps these ones that, so to speak, already exist. Since the reperception consists in a minimalist linguistic-imaginal feat, rather than in the creation of novel sensory percepts, this is perhaps the apogee of the iceberg principle (less is more).

I'd love to hear from anyone who happens to find, or create, other examples of this principle in action.