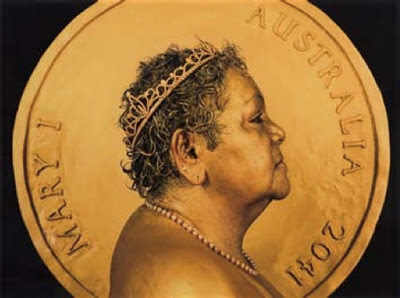 Image via [pdf].
Today, while browsing one of Melbourne's excellent bookstores -- which are still surprisingly abundant, despite global publishing industry turmoil -- I came across this striking image on the cover of an Australian literary quarterly, Meanjin.

It's from a 02008 photograph series called Oz Omnium Rex et Regina (King and Queen of All Oz) by Darren Siwes, an artist of indigenous Australian and Dutch descent.

A bit of context for international readers:


[The photograph] depicts a recognizably Australian gold coin, close-up. The words "Mary I, Australia 2041" are emblazoned onto its shiny surface. The future reigning monarch bears a distinct resemblance to a local, high-profile Aboriginal woman, leading viewers not only to question Australia’s current (and to many, anachronistic) constitutional monarchy, but also its legal legitimacy. In terms of natural justice, the obvious question arising is, "Why not an Indigenous monarch, or at least, an Indigenous head of state?"
~Christine Nicholls, "A Festival Of The Spirit" [pdf; essay reviewing the 02009 South Australian Living Artists Festival, in which this work also appeared]

Below is the obverse of the one dollar coin now in use, which, like all Australian coins, bears the image of Queen Elizabeth II. Who lives in, um, England. 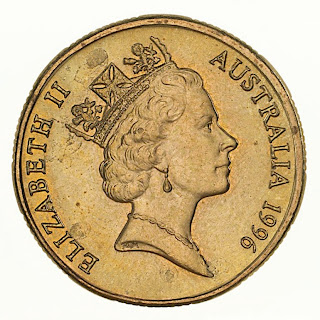 Image via. [Note that the version of the Queen's head struck in Australian coins
does change periodically, loosely tracking the ageing process.]
Now, as some readers may guess from this blog's usual focus on experiential and performative scenarios, regarding the choice of medium, I personally resonate less with series of gold and silver painted-busker-statue type photos, appearing mainly in art galleries or literary reviews, than I would with an alternative execution of the same idea, in which the coins were physically produced, a tangible and diegetic (in-story) artifact, manifested, integrated and discoverable in everyday contexts, today. 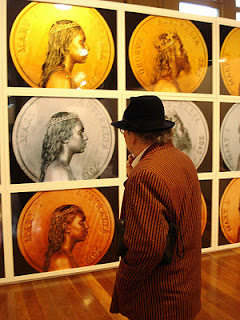 Image via.
In any case, the proposition offered here remains challenging and culturally relevant, and currency proves an especially potent symbolic vector in which to embed it. Like other future artifacts from the same "family" -- e.g. the Amero, or the Aung San Suu Kyi kyat -- this embodies the hypothesis of an epoch-making change of governance in the near future, and it invites us to spend time with the idea for real. 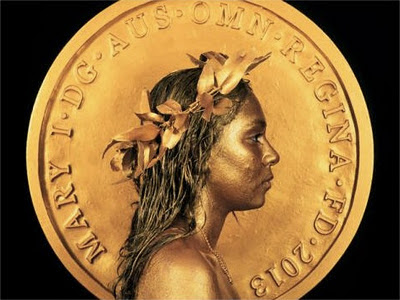 Related posts:
> The currency of Burmese dissent
> The value of hypothetical currency
> The act of imagination

* Quoted in Lewis Hyde, Trickster Makes This World.
Posted by Stuart Candy at 1:39 am