Anab Jain is a leading light of experiential futures practice. She is cofounder with Jon Ardern of the London-based "vanguard foresight and design organisation" Superflux, whose work has rightly earned attention and admiration far and wide, with projects like Mitigation of Shock (an installation), Instant Archetypes (a tarot deck), and Drone Aviary (a film, and more). 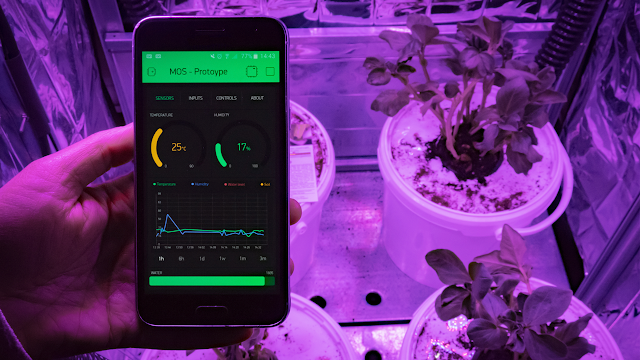 Image from Mitigation of Shock by Superflux, an installation at CCCB portraying a small London apartment adapted for climate change in 02050 (02017)

We first met in 02009, just a few years into our own first experiments with experiential futures, following a talk I gave on that topic at the Long Now meetup in London one evening during my time visiting 'Design Interactions' at the Royal College of Art. This was the highly influential MA program led for a decade by the wonderful Fiona Raby and Tony Dunne from which Anab had graduated back when it was still a degree in 'Interaction Design' –– prior to the 02008 landmark MoMA exhibition Design and the Elastic Mind, which contributed much to the visibility of the work of not only Dunne and Raby but also their mentees, in what they called at the time 'design for debate' and 'critical design', and well before 'speculative design' framing coalesced (as mentioned by Anab below), a development of the past five years or so.

Superflux got underway in 02009, a few months after we'd met in London, and Anab and Jon were among the first designers to set up shop in a way that engaged the tradition and practices of the futures field not just explicitly (using the language) but substantively too (really using the tools). For instance we recently collaborated on introducing foresight to International Federation of Red Cross and Red Crescent Societies (IFRC) via experiential scenarios deployed at IFRC's biennial strategy meetings.

This post is an abridged version of a conversation appearing in the recently published Journal of Futures Studies special issue Design and Futures, Volume I.

Anab's sense of the work as "slow critical activism" really resonates with me, and her candour here, talking about the behind-the-scenes challenges of maintaining a design/futures business that is both viable and principled, is super generous and helpful, I think, for the many newcomers eager to figure out how they can practically make this sort of thing a part of their work lives.

SC: How do you situate your practice in relation to futures and design?

AJ: I think we are situated somewhere in the middle. We have a two-pronged approach. We do foresight and horizon scanning – that big, meta-level stuff – but we simultaneously ground it with material explorations, ethnography, research, prototyping.

Obviously we come from a design/art background more than futures. Our schooling was often about what the implications of a certain technology on society might be. And over the years, we’ve studied the more traditional futures methods a bit, not quite as much as a futurist would.

SC: What are some projects or initiatives that you’ve been involved in that you consider exemplary of your approach?

AJ: Our approach has changed a lot. We often used to work around a technology, so we would pick something like quantum computing or optogenetics, and try and understand what its potential is, but also poetic implications that the scientists or the technologists might not have explored.

And we’ve moved from that to thinking more socially, politically. We’re very interested in the implications of living with climate change, so for a recent project, Mitigation of Shock, we really wanted to understand how to bring that future that is so abstract around climate change - especially in the Western part of the world - making it real and conceptually visceral, but also not dystopian.

SC: I’m interested in how you imagine the work that you’re doing against the backdrop of an increasing number of people operating at this intersection. If there is a “you are here” point on a map of bigger activities going on, where do you locate yourself?

AJ: Oh, that’s a good question. We keep asking that ourselves.

'Speculative design' has become popular, the term; although we have never actively used that term so far. We are afraid of labelling the work we do within a specific discipline, because for us it’s changing all the time, and we want to have the freedom to change. So we just call ourselves designers, or artists even.

Where people are interested in our work, or want to commission us or hire us, they are not thinking about us as speculative designers or critical designers either. They’re thinking: "We need to think about the future, but we don’t know quite how to make it visceral enough to get people to understand the consequences."

SC: What are you grappling with in relation to these practices at the moment?

AJ: Lots! We’ve gone from being tiny to growing quite a bit, and then, recently decided to consider more carefully where we go next, and stop just producing project after project after project. I think we are trying to understand what meaningful change looks like for us.

We keep getting emails from people, and we know that the work affects people and gets them to think differently, but how can we materialise it without using this language of evaluation and impact and measuring? Because these are not things that can be instantly measured. Something that you’ve done to provoke people could affect them and get them to think differently after years –– but how do we begin to surface that?

I see it as a form of slow critical activism. If our work becomes a catalysing force for people to imagine things they would not have been able to imagine otherwise, that’s powerful. But then what? We are at that stage right now.

Currently I think our work is moving in two directions: one, with people whose idea of the future we may not agree with personally, but who have a lot of power and influence to affect change at a large scale. Our work with them focuses on helping them consider broader, unintended consequences by enabling them to think differently and more broadly. Secondly, we work in the public sphere, triggering public imagination.

Organisations who have power and influence and can actually affect decisions around climate change or education, are so outcome driven, that their key question around any futures always seem to zoom in on: What are the outcomes we get, and what’s the impact, how will this affect our strategy?

SC: And what do you tell them?

AJ: We don’t really have a clear answer. We can say, okay, we did this with the UNDP, and that led to the opening of this completely new department where they’re thinking about alternative financing. Or we did this, where it affected a decision or policy change. Examples are few and far between where there is a clear, linear, obvious trajectory of 'impact'.

SC: What do you think are the most important things for people who are interested in this area of work to be aware of?

AJ: One of the questions I always get is, "How do you actually make money, and who are your clients?" and it’s like, it doesn’t seem plausible that we could even be doing work and be paid. We’re not set up to be making profit, but we are alright!

We could earlier this year have gone easily from eight to twenty people. But we realised that scaling in numbers is perhaps the wrong way of thinking about 'growth' for our studio, and the scale lies in the nature and ambition of each project, and the way it can influence a decision or change perception. The bespoke nature of our work means we cannot adopt a cookie cutter approach to our services. No brief is ever the same. And having a flexibility of staff and overheads to support such work is very important. We might have big ambitions, but it’s not dependent on the scale of our practice.

For a designer, it’s so tempting to have 20, 30, 40 employees, to become 'the office'. It is in the model. I am often asked: "How big are you? How many employees do you have?" And they will actually decide whether to give us work or not based on my answer. So yes, sometimes it’s tempting to scale because scale is a seen as a visible sign of success.

SC: I really like this unwillingness to settle for an inherited definition of success. Instead it’s striving for a certain quality of impact, or a certain kind of cultural presence.

AJ: We tried it, and we’re both not managers. Well, we do have to now, but we really enjoy the actual craft of storytelling, making, building, designing and all of that. So we want to find a way we can continue our practice.

SC: Have you ever done a futures process for your own organisation?

The full version of the conversation as published in JFS can be found here.

Thank you for sharing
https://aab-edu.net/