Last Saturday, 26 August saw the kickoff event for the state's futures-oriented public discussion process, "Hawaii 2050", at the Dole Ballrooms, Honolulu. About 530 participants from across the islands were in attendance. I am still recovering from the monster effort involved in staging four "futures rooms", which allowed participants to experience, about 130 at a time, two of the four scenes (from among countless possible futures), as a catalyst to further discussion about the possible, probable, and preferable paths that change could take in Hawaii between now and 02050. See this earlier post for more background. In each case, a colour name was attributed for logistical reasons (to put on people's nametags and room signage), not to imply anything about the contents of the scenarios, which were kept secret from participants until they stepped in the door. The photos below, taken by HRCFS graduate student Cyrus Camp, provide a little of the flavour of each. 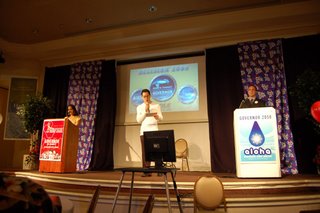 In the "Orange" version of Hawaii circa 02050, two corporations -- "Aloha Nuclear and Water", and "Kobayashi Virtual Concern", vie for the Hawaiian Governorship in a political debate staged at the Dole Underwater Hotel and Casino. 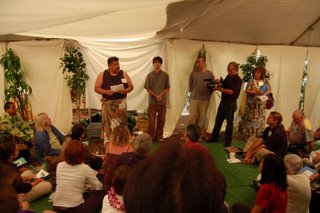 For "Maroon" Hawaii, participants are cast as attendees at a compulsory -- like jury duty -- civic education program, in the Honolulu ahupua'a. At this "introductory session", presentations are made about the abundant and versatile hemp crop grown in this future Hawaii, and about the role of do-it-yourself biofuel in a renewable energy portfolio. 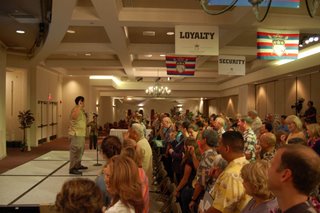 In the "Silver" scenario, a post-"peak oil" global economic collapse has led to the rise of a military-run society, overlaid with a puppet Hawaiian monarchy. Participants entering this scene are cast as refugees from smaller Pacific islands disappearing under rising oceans, and inducted as citizens and subjects of the so-called Democratic Kingdom of Hawai'i. 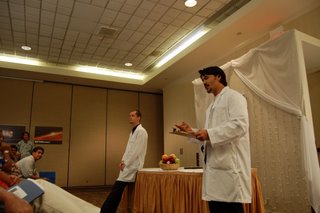 "Blue" Hawaii posits a sort of technological Singularity, after which the meaning and status of ordinary humanity is transformed. Here participants are a group of "premods" (PSEs -- persons sans enhancements; homo ludditis; naturals) being addressed by staff at MBED, the "Mind Body Enhancement Depot". They are offered a free technological upgrade paid for by the World Council in order to raise the GHI, or Global Happiness Index.

Now, none of these was intended to be taken as either advocating or predicting a particular path; the aim was instead to promote a broadened sense of what the possibilities could be. From that perspective, this part of the event seems to have succeeded. People were highly engaged by the exercise, and responded energetically and thoughtfully to the ideas presented therein.

This article from Sunday's Honolulu Advertiser says some more about Saturday's program, and this piece by futurist Jamais Cascio (our guest presenter at last week's futures salon) provides a highly thoughtful response to the whole "Hawaii 2050" effort, as well as the Immersive Futures themselves. Details of the scenarios can be found here. All feedback on any aspect of this event, or the broader endeavour of which it is part, would be most welcome.

I will be out of action for the next few days, attending Burning Man for the first time, in Nevada, but there will be more on "Hawaii 2050" -- as well as Burning Man -- in postings to come. Thanks to all those who volunteered their time both in the leadup and on the day to make this event possible, but mahalo especially to my futures colleagues Jim Dator and Jake Dunagan for being absolutely terrific to work with on this ambitious experiment in making futures thinking more real.

Related posts:
> Immersive futures for Hawaii 2050
> Experiential scenarios on video
> The Futures of Everyday Life
> A history of experiential futures
> The Bird Cage
Posted by Stuart Candy at 10:43 pm