Honolulu's Chinatown is among the city's oldest and most iconic districts. It's a bastion of small family-owned businesses, where so far no franchise stores or national restaurant chains have opened.

On Friday 5 October, the following suddenly appeared there:


Large posters announcing a new Starbucks moving into a large corner building that has been vacant for three years... 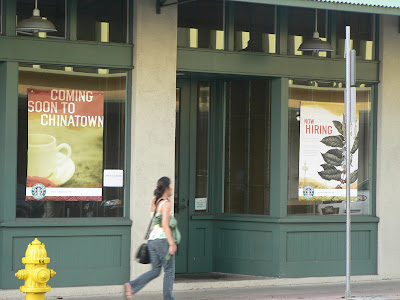 
Signs for TGI Friday's (a US bar and restaurant franchise) opening soon on a property at the southeast corner of Chinatown... 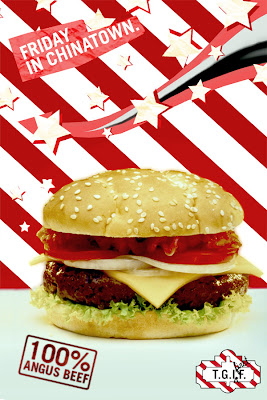 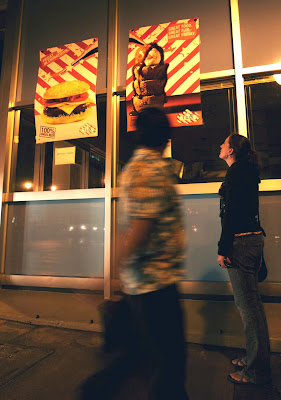 
A banner inviting bids for luxury loft apartments, starting at $2.1 million, in one of the district's most recognisable buildings... 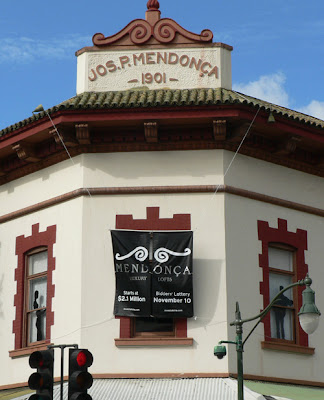 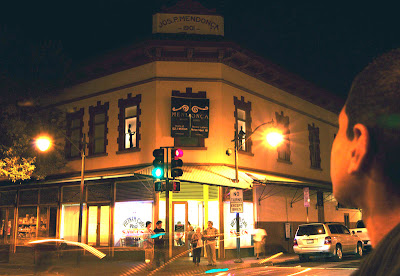 
That evening, members of a grassroots activist group gathered outside the supposed future Starbucks, calling on patrons of the area's monthly First Friday art walk to "Save Chinatown" from what appeared to be a stealthy corporate takeover by investment consortium Aloha™ Land and Water (investaloha.com). They distributed paraphernalia including flyers ("Honolulu's Chinatown: The Next Waikiki?"), postcards, buttons -- and even fortune cookies (e.g. "Better a diamond with a flaw than a pebble without"), and they directed concerned parties to savechinatown.org. [Note, 18 October 02010: these in-scenario sites are unfortunately no longer live.] 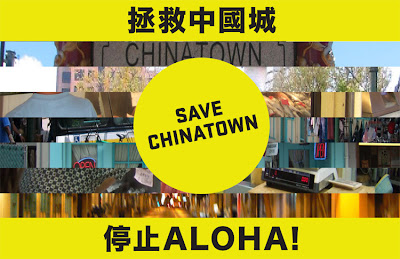 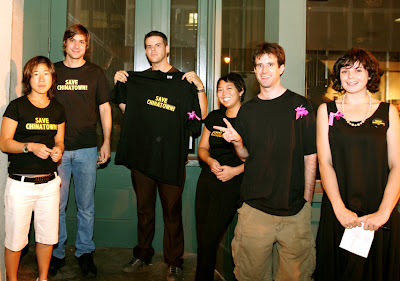 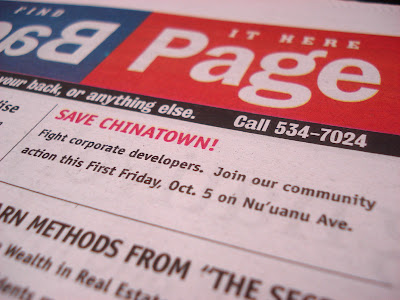 
This intervention, which manifests or simulates one possible near-term future for the area, generated some attention, including a front-page story in the Honolulu Advertiser (the state's largest newspaper), and shorter (but slightly more accurate) coverage in the other major daily, the Star-Bulletin [links fixed 18 October 02010, the latter courtesy of Internet Archive's marvellous Wayback Machine; scroll to the article amusingly titled article, "Futurists set up fake scenario"].

Here's the scenario, written by Jake Dunagan and me, which served as the basis for this exercise in ambient foresight:

McCHINATOWN ~02010
What if Chinatown were taken over by corporate interests?

A Starbucks on a prime corner of Honolulu's most eclectic, gritty, and original neighborhood proved to be a tipping point -- and a litmus test of allegiances -- in the ongoing development of Chinatown. Some saw it as a hopeful symbol of the district finally catching up with a globally connected, 21st century city; others feared the beginning of the end for independent business and local character. Against the short-lived protests of the grassroots Save Chinatown! coalition, international entrepreneurs Aloha™ Land and Water led a new wave of investment in the district.

Week by week, new ventures and ubiquitous chain stores could be found opening their doors to a throng of customers. Free shuttles for shoppers from Waikiki became a common sight, and luxury lofts became the rage for a crop of young, urban professionals. Old time landowners and traditional Chinatown residents leapt at the opportunities this presented, and vacant lots filled immediately.

Some in the arts community became concerned at the loss of character and uniqueness that had been a powerful attractor for artists and other "creatives" on the island. Meanwhile, new zero-tolerance policies against prostitution, drug users, and homeless persons had their effect -- complaints about these problems are now seldom heard, streets are clean, and a recycling program has been instituted, receiving high praise among environmentalists well beyond the neighborhood.

There is talk of re-naming the district, in pursuit of a fresh image, also to reflect the fact that now less than 5% of residents or business owners are of Chinese background (and less than 25% of Asian descent generally). This proposal remains controversial though, and its prospects are uncertain. What is certain is that the Chinatown of today would be hardly recognizable to someone who knew it a decade ago.

[Update 18 October 02010: Links fixed. Also, the year in which this scenario was set is now almost gone and Chinatown has not yet fallen prey to international developers, as far as we know.]
Posted by Stuart Candy at 8:22 pm

Here's the letter Jake and I sent to the editor of the Honolulu Advertiser on 16 October in response to the front-page article about FoundFutures:Chinatown appearing the day before:

I am an archivist specializing in futures research at Tamkang Virtual College. I recently revisited the Advertiser article "Chinatown pranks, with a purpose" from 15 October 02007. Exactly two decades later, it is arresting to see that the FoundFutures project was then described as a prank. As we all know, this experiential approach to understanding alternative futures has become commonplace in education, and an indispensable aid to decision-making in organizations of all stripes. People eventually realized that it makes more sense to be surprised by a simulation than blindsided by reality. (In the US, this became much clearer after Hurricanes Katrina and Frank in New Orleans, and the tragic Los Angeles water riots.)

As a long-time resident of these islands I consider it fortunate that people in Chinatown, and Hawaii more broadly, successfully pressed for more futures-oriented public decision-making. I wonder if your editors have considered contacting FoundFutures creators Dunagan and Candy to review the method they demonstrated in Hawaii 20 years ago. This would be timely in view of Yumi Vong's famous design of the Statue of Harmony currently under construction in Honolulu Harbor.

Thanks for your time and continued reporting excellence.

The letter was not published.