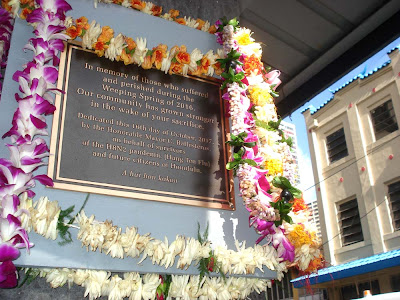 On Tuesday, 16 October 02007, this bronze plaque appeared on the corner of Maunakea and Pauahi Streets in Chinatown, Honolulu -- testimony to the resilient response of the community to a hypothetical tragedy that would not occur for another ten years.

Chinatown has in its history been ravaged by the plague, quarantined, and burned to the ground. In April 02016, the future rhymes with bygone times as bird flu rears its beady-eyed little head. Our distributed installation played out the scenario in reverse, from the installation of the memorial 18 months after the outbreak... 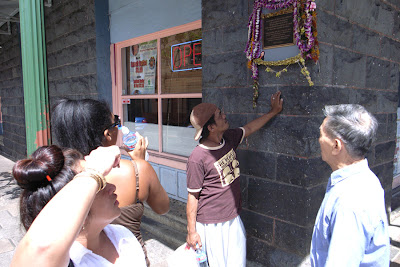 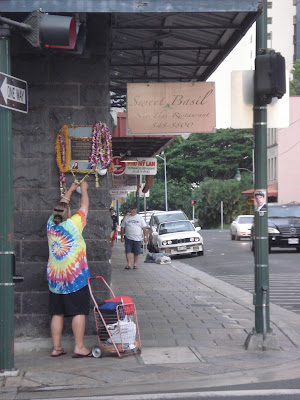 To the revival of entrepreneurial activity shortly after the epidemic... 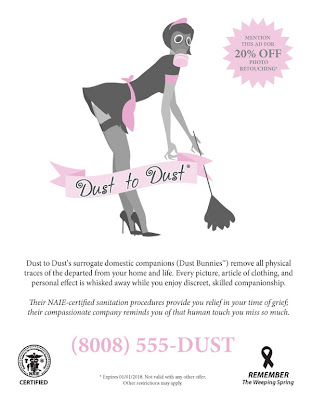 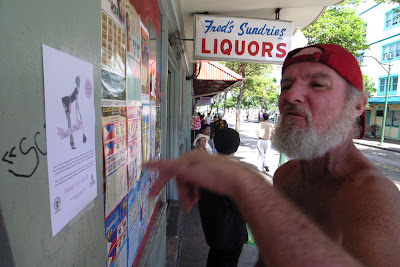 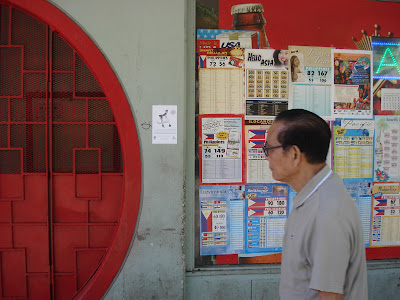 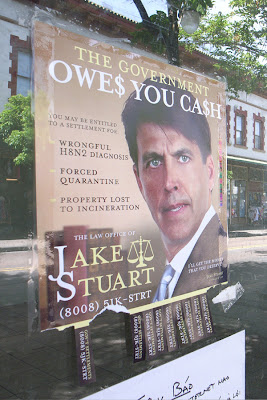 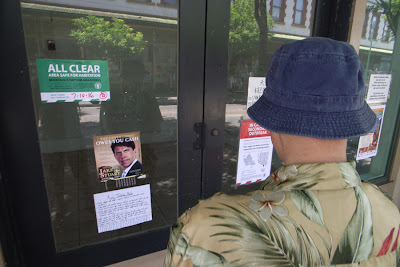 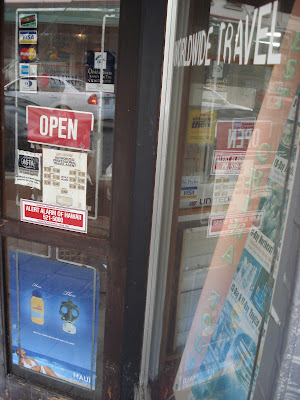 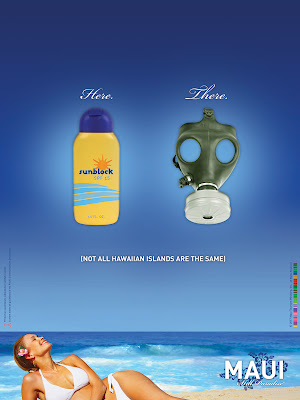 To official notices posted by the National Agency for Investigative Epidemiology (N.A.I.E.) as the crisis was brought under control... 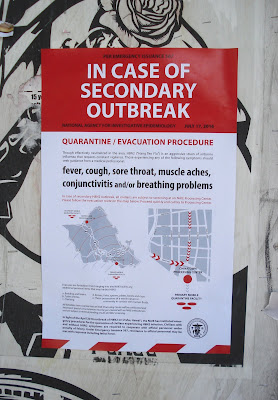 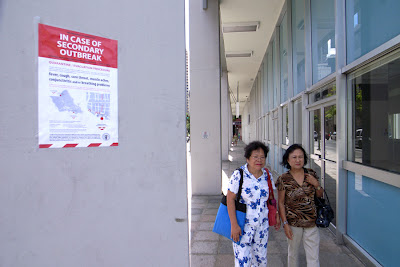 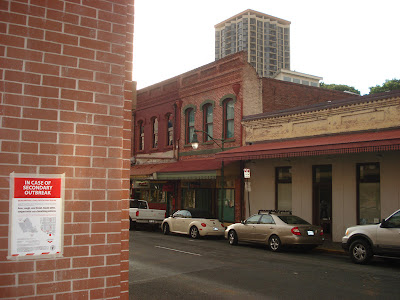 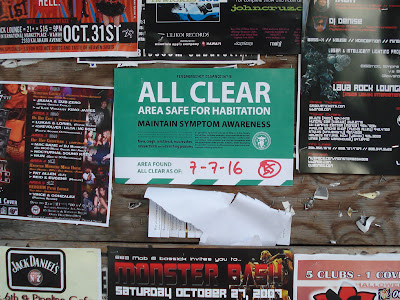 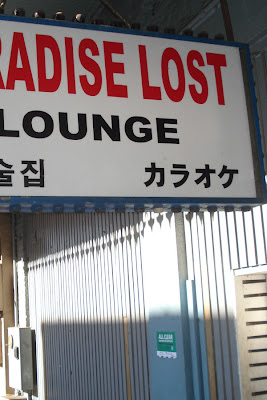 To impromptu messages placed in the streets by ordinary people when the outbreak first occurred... 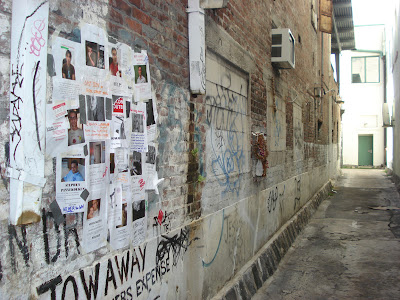 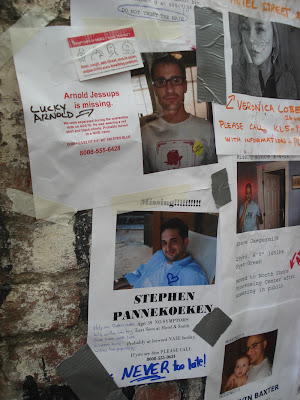 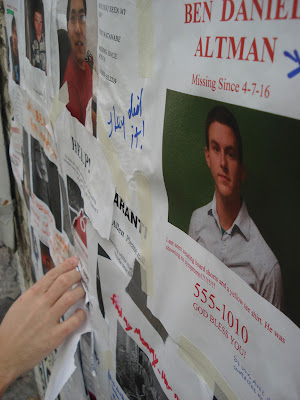 Below, the outline scenario that Jake Dunagan and I wrote for this third phase of FoundFutures : Chinatown...

THE BIRD CAGE ~02016
What if Chinatown were ground zero of a new influenza epidemic?

Chinatown has long been haunted by tragedy. In 01886 and again in 01900, it was burned to the ground. When a deadly strain of influenza called H8N2 broke out in April 02016, this tragedy in paradise was global news; but local authorities acted quickly. Aircraft were grounded and as Honolulu's "Hang Ten Flu" took hold, the National Guard immediately quarantined Chinatown and systematically raided all residences and businesses in search of individuals exhibiting symptoms.

The rapid response of authorities, and establishment of military/medical checkpoints along all highways across the island, meant that the crisis could be confined to O'ahu. Residents and visitors at risk of infection were relocated to mobile quarantine facilities in Honolulu or on the North Shore (several cruise liners were requisitioned for this purpose by the National Agency for Investigative Epidemiology, the newly established, disease-oriented tactical response branch of FEMA). The ill were then shipped to more secure facilities on Moloka'i for treatment -- and, in one out of every three cases, burial.

The "Weeping Spring" of 02016 brought tourism and most other aspects of everyday life on O'ahu to a standstill. The origins of the virus remain controversial -- at first thought to due to low-quality imported poultry, the outbreak has reportedly been traced to a security lapse at a university research facility on the island. Investigations are still underway.

During the tragedy, the community of Chinatown was frozen. A high proportion of residents lost family members, and the cessation of construction which had occurred at first from necessity was extended while residents debated next steps. However, eighteen months later the citizenry has regrouped and, led by a newly elected, youthful Mayor C. Ballesteros, a renewed sense of shared purpose and identity is discernible. The temporary interruption in shipments and motorized traffic had the effect of heightening awareness of Hawaii's isolation, and increased calls for self-reliance. Many residents have begun cultivating their own food sources, and plans are afoot to turn a number of Chinatown streets into public gardens.
[Update 30 October 02007: See also previous scenario... Green Dragon / Next post... Outdoor installation takes cover]
Posted by Stuart Candy at 4:37 pm

Special thanks to those members of the RitualLab who assisted in the design of future artifacts:

(I'm pleased as punch to have been a part of it.)