It is just over one year ago that the kickoff was held for the Hawaii state legislature's effort to engage people in an evaluation of its ecological, economic and social sustainability. Last weekend, on 22 September, the "Hawaii 2050" draft plan was unveiled -- in no less aupicious a setting than Hilton Hawaiian Village resort's opulent Coral Ballroom. 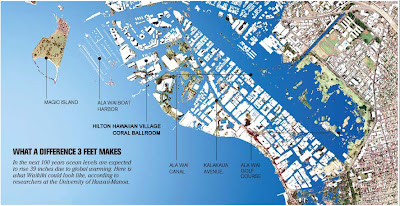 The image shown above comes not from that occasion (which consisted largely of a procession of well-meaning pep talks) but from a Honolulu Star-Bulletin article on climate change, titled "The drowning of Hawaii", which appeared -- whether by coincidence or design, I don't know -- the day after the "2050" show. It's a map of Hawaii's iconic tourist magnet, Waikiki beach, projected 100 years hence, with 39 inches (one metre for non-imperialists) of sea level rise added by researchers at UH-Manoa's School of Ocean and Earth Science and Technology. I've added in the location of the "2050" venue on the map, which you can click to enlarge. Here, the Hilton's lavish conference centre becomes an island.

For comparison, Waikiki today looks like this (captured from Google Maps):

Now, I don't recommend taking simple extrapolations at face value. Doing so is assuredly one of the deadly sins of futures thinking; and the warmer, wetter Waikiki assumes no preventive or mitigatory measures (such as sandbagging, levee construction, or strategic retreat from an advancing coastline) which we might reasonably expect to crop up over a century of slowly rising seas. That is, supposing the scientists' projected sea level rise were to prove entirely accurate, even then, their visual forecast would not be correct. However, the correctness of the image is not its point here. Rather, it's a heuristic device for bringing attention to a risky situation, a changing circumstance, that needs to be thought about and managed. It could also have been a relevant topic to address before an audience of almost 1000 citizens (who were sufficiently concerned to spend $20.50 a head and a Saturday morning) attending a public meeting officially culminating an 18-month long consultation about the long-term challenges facing the Hawaiian islands.

This species of Inconvenient Truth-like climate change visualisation is an increasingly familiar -- yet, we may hope, no less sobering for that -- harbinger of the sort of major change which we may well face in the coming decades. But to the futures-minded observer, it is also the type of discomfiting possibility the discussion of which was conspicuously absent from the event.