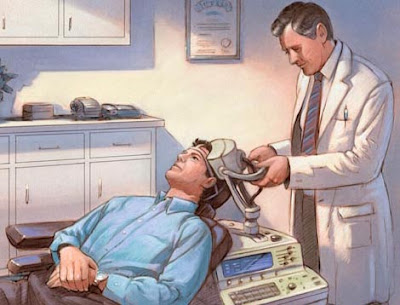 I've been thinking a lot about why we're doing the type of work we've been doing over the past couple of years, manifesting alternative futures in the form of immersive experiences and tangible artifacts (postcards, products, props). This question is central to my doctoral dissertation topic that's been gestating throughout the semester, but I find it hard to write about -- there's a tangle of related ideas that don't seem to want to let go of each other, so pulling at one thread seems to disturb the whole clump.
But here goes.

There are three points I want to make, and I'll spread them over several posts. First I want to say something about the concept of future shock and how it gives rise to the idea of future-shock therapy. Next I'll talk about the "therapy" aspect of it, the immersive or experiential role of arts and design in this effort. Finally, we'll examine the relationship between scenarios, simulations, and hoaxes.

Although there may be many things about Alvin Toffler's famous 01970 book Future Shock that are intellectually questionable (see for instance Richard Slaughter's reappraisal in this 02002 article), I think the underlying thesis remains valid, and the challenge he describes there is even more pressing today. I recently went back to "The Future as a Way of Life", the article published in Horizon magazine in 01965 which introduced the concept. (It was republished in the 01971 book Society as It Is: A Reader, which is how I got a hold of it. I quote at length here because it's interesting reading but hard to come by -- although the full text of the book version, which makes the same basic points with a lot of extra fluff that most readers can do without this many years later, can be found online.) Anyway, Toffler writes (pp. 450-451):

Culture shock is the effect that immersion in a strange culture has on the unprepared visitor.
...
It is what happens when all the familiar psychological cues that help an individual to function in society are suddenly withdrawn and replaced by new ones that are strange or incomprehensible.
...
Yet culture shock is relatively mild in comparison with a much more serious malady that might be called "future shock." Future shock is the dizzying disorientation brought on by the premature arrival of the future. It may well be the most important disease of tomorrow.
...
Future shock is a time phenomenon, a product of the greatly accelerated rate of change in society. It arises from the super-imposition of a new culture on an old one. It is culture shock in one's own society.
...
This is the prospect that man now faces as a consequence of accelerated change -- the prospect of dislocation far more subtle, complex, and continuous than any we have known. Change is avalanching down upon our heads and most people are utterly unprepared to cope with it.

He briefly describes a whole range of areas in which accelerating change can be discerned -- including energy, information, agriculture, work, urbanisation, biology, and the brain --then elaborates on the nature of the challenge as he sees it (pp. 457-458):

The commanding point is that we can anticipate volcanic dislocations, twists and reversals, not merely in our social structure, but also in our hierarchy of values and in the way individuals perceive and conceive reality. Such massive changes, coming with increasing velocity, will disorient, bewilder, and crush many people.

We think of ourselves as sophisticated and well educated, but how well prepared are we, as a society, to cope with the sudden new sensations, pains, intellectual turnabouts, eruptions, and shifts in perception that are likely to confront us as we speed forward into a culture in which computers can learn, and can improve upon their own performance, in which man is no longer the only manifestation of high-level intelligence on the face of the earth, and in which, in fact, he may come crash up against the realization that his globe is not the only inhabited parcel of real estate in the universe?
...
For the current upbringing of most people, and the subtly inculcated sense of time that comes with it, are both inimical to adaptability.
...
The fact is -- and simple observation of one's own friends and associates will confirm it -- that even the most educated people today operate on the assumption that society is relatively static. At best they attempt to plan by making simple straight-line projections of present-day trends. The result is unreadiness to meet the future when it arrives. In short, future shock.

As Slaughter notes, Toffler's prescription for education is, broadly, right on (pp. 458-459):

What, if anything, can be done to lessen this shock and the disorientation and disability that come with it? Society has many built-in time spanners that help to link the present generation with the past.
...
No such time spanners enhance our sense of the future. We have no objects, no friends, no relatives, no works of art, no music or literature, that originate in the future. We have, as it were, no heritage of the future.

Despite this, there are ways to send the human mind arching forward as well as backward. We need to begin by creating a stronger future-consciousness on the part of the public, and not just by means of Buck Rogers comic strips and articles about the marvels of space travel or medical research. These make a contribution, but what is needed is a concentrated focus on the social and personal implications of the future, not merely on its technological characteristics.
...
We offer our children courses in history; why not also make a course in "Future" a prerequisite for every student, a course in which the possibilities and probabilities of the future are systematically explored, exactly as we now explore the social system of the Romans or the rise of the feudal manor?

We train our Peace Corps volunteers by attempting to give them advance knowledge about the conditions and culture of the country to which they are assigned. Why not devise an education designed to minimize future shock?

The emergence of the academic field of futures studies during the second half of the twentieth century can be seen as a response to this challenge. It is exactly what Toffler calls for --- an attempt to devise an education designed to minimise future shock.

But it has, I think, failed to have the mainstream impact that it should have.

As regular readers of this blog will be aware, like other futurists I frequently find myself in conversations with people who have never heard of futures, are incredulous that it exists (because of their assumptions about what it entails), and who accordingly think there is something wrong with me because I study it. (This misunderstanding occurs with monotonous regularity in the press, too, most recently in this abysmally lazy piece in The Economist -- among the suitably appalled futurist responses so far: Michele Bowman, Jamais Cascio, and Maree Conway).

Even if we're doing good work, the what-futures-is-not conversation that ensues in nine out of ten first meetings with anyone of even moderate intellectual curiosity suggests strongly to me that the formal study of futures is not having the impact it should be having on popular discourse about "the future".

One of the reasons is that the idea of making the study of the future intellectually respectable tends to be conflated with the hope of doing so on a scientific, empirical basis. The big mistake Toffler makes, I think, is his insistence on a singular conception of the future (pp. 459-460):

We must kill, once and for all, the popular myth that the future is "unknowable."
...
Every day brings improvement in man's ability to peer into the darkness ahead, and this is true in the social as well as the "hard" sciences.

He does acknowledge that "the future" is constantly in flux (p. 461):

[W]e might consider creating a great national or international institute staffed with top-caliber men and women from all the sciences and social sciences, the purpose of which would be to collect and systematically integrate the predictive reports that are generated by scholars and imaginative thinkers in all the intellectual disciplines all over the world. Of course, those working in such an institute would know that they could never create a single, static diagram of the future. Instead, the product of their effort would be a constantly changing geography of the future, a continually recreated overarching image based on the best predictive work available.

Yet at the same time it can be seen how he holds fast to the assumption that a singular -- albeit evolving -- idea of The Future is sufficient. "If the contemporary individual is going to have to cope with the equivalent of millenniums of change within the compressed span of a single lifetime, he must carry within his skull a reasonably accurate (even if gross) image of the future." (p. 458)

Our notion of future-shock therapy takes seriously the challenge of anticipatory, immersive experience -- educating to mitigate future shock, as it were. But it's integrated with the plurality of alternative scenarios which we believe to be essential; faithful to the radical contingency and unpredictability which increasingly mark the accelerating historical process. In contrast to Toffler's advocacy of a probabilistic single best-guess, our prescription for future shock involves entertaining a multiplicity of images of the future, based on differing emphases, interpretations, aspirations, and concerns -- each with their own logic and legitimacy.