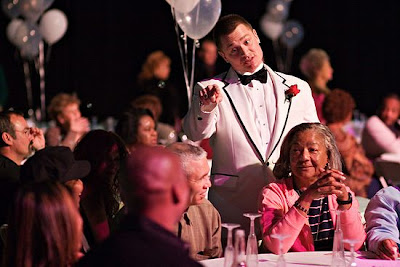 Tony n' Tina's Wedding | Image: Studio J Photography
I was excited this evening to hear of a long-running theatrical show, called Tony n' Tina's Wedding, which has some of the characteristics Jake and I have sought to incorporate into our experiential futures interventions. (See for instance, photos and videos from the "Hawaii 2050" kickoff staged in August 02006; or posts about FoundFutures:Chinatown.)

At Wikipedia, it's described as follows:

Tony n' Tina's Wedding is one of the longest-running comedies in American theatrical history. Credited as the originator of the "environmental theatre" craze, Tony n' Tina’s Wedding stages a traditional Italian-American wedding and reception with the warm and intrusive stereotypes pushed to the limit. Audience members are treated as guests at the wedding by the interactive, improvisational comedy cast.

At Tony n' Tina's Wedding, audience members actually play the roles of Tony n' Tina's family and/or friends. These are roles we have all been practicing, every time we go to a real wedding. This universal familiarity with the union of two individuals from 2 distinct families, regardless as to where you are from, will take you back and forth between fantasy and reality throughout the entire evening. For the ultimate experience... eat, drink, dance, converse and allow yourself to be caught up in the activities. This all inclusive evening of entertainment will be something you and your friends will be talking about for many years to come.

All prices are in lieu of a gift to the happy couple and include the show, dancing, and dinner although menus may vary depending upon the specific venue in which you are attending.

The idea for Tony n' Tina's Wedding was originally conceived at Hofstra University while Mark Nasser and Nancy Cassaro (the original Tony n' Tina) were undergraduates. Both in the drama department from 1977-1981 they made up these characters and would often improv with each other, acting out the roles of two Italian boyfriend-girlfriends from Queens, just for fun. As their professional relationship continued (after both moving to New York), after graduating from Hofstra, their characters continued to develop as well. Soon after the idea to present an interactive wedding, where the audience played the guests, was proposed and in 1985, was acted upon. Three performances were planned, actors invited their friends and family, and at this point it became clear to Joe Corcoran that this was an "event "that would appeal to an audience, well beyond traditional theater goers. Well, the rest is history.

Not at all surprising, really, that it started life as improv. All creativity seems to spring from the process embodied by improvisational theatre. Its cardinal principle, which we have adopted in our scenario and design development process, is "Yes, and..." That is, to cultivate a reflex for building on whatever you're given.

I gather that the Tony n' Tina experience begins as early as the purchase of tickets, which are issued as invitations (naturally!), and, once at the venue, it carries on seamlessly even into the restroom, where you might find yourself drawn into conversation (in-world) by your "host family". Almost as scary as cool, which is a great sign.

Being something of a scenario purist, sensitive to diegetic consistency, I guess I wish the website (tonylovestina.com) managed to maintain the story, rather than blowing its wad and quoting Joel Siegel -- don't break the universe, dammit! -- but in any case, environmental theatre (which I don't recall encountering until now) -- is clearly a genre of performance that I ought to research.

Many thanks, Nancy, for the lead!
Posted by Stuart Candy at 4:28 am