Of used futures and counterfactual clothing

Shirts and caps proclaiming the victory of the New England Patriots -- when the American football team actually lost the latest Super Bowl -- have ended up in the hands of poor Nicaraguan children.
[...]
Winners' shirts and other garments are produced in advance so players and fans can put them on to celebrate immediately after the final whistle of the game. Garments of the losing team are obviously unwanted.

The Giants stunned the previously undefeated Patriots 17-14 in this year's Super Bowl.

When I came across this news article over the weekend, I was reminded of a similar piece spotted by Jake last year. An extract:

It's an answer to a dilemma of a little-known corner of professional sports: what to do with all the unsalable paraphernalia of near-champs.

Since the mid-1990s, World Vision has worked with MLB [Major League Baseball] to distribute counterfeit or mislabeled clothing to those in need rather than sending it to the big closet in the sky. It does the same with the National Football League (NFL). This year marks the first time that the MLB will contribute their postseason apparel to the group, not just fraudulently manufactured goods. Sporting-goods stores are also getting into the charity act.
[...]
"The moment of a clinch, the teams celebrate. They pile on top of one another, they get all crazy, and part of that celebration is, in fact, them proclaiming their championship clinch with a T-shirt and a cap," explains Steve Armus, MLB's vice president of consumer products. "It's something that's traditional in baseball and some other sports, and for all the teams it's an important moment."

But to be prepared for each team's potential victory ceremony, the MLB prepares hats and T-shirts – 288 of each item for each team – before each playoff series has been decided. This year, when at least 12 teams were in hard-fought competition for eight playoff spots, league organizers printed apparel for every possible scenario. The result: Thousands of articles of clothing announcing the Padres', Mets', and other vanquished teams' seasonal victories are en route to Ghana.

The first time, I didn't quite see this, but now it occurs to me that, despite the charitable intentions of the parties concerned, there is a strange, ironic, and powerful metaphor at play here.

Futurist academic and consultant Sohail Inayatullah sometimes speaks of "used futures", when describing the importance of decolonising our sense of the future (an example; also cited in this previous post). His intention, as I understand it, is to highlight the way a community's sense of the possible, probable, and preferable can be occupied unthinkingly, inappropriately, and in all likelihood damagingly, by concepts developed in another context (and pursuing other interests) altogether.

Although it may not be quite the sense he has in mind, it is with "used futures" that we dress the indigent beneficiaries of these sports companies' generosity. They are literally clothed in possibilities, however trivial, discarded by the wealthy West.

And so, in the wake of the recent Super Bowl result, we now have the following vivid, curious image; poor children in Third World countries running around clad in counterfactual souvenir apparel.

"It will be a parallel universe, where the Patriots had a perfect season," said Karen Kartes, a spokeswoman for World Vision, the charity that will be delivering the items.

Here are some shots from a parallel universe we prepared earlier: children in Zambia wearing "Champion" t-shirts and caps celebrating the Chicago Bears, who lost the 02007 Super Bowl. 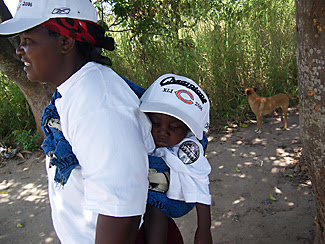 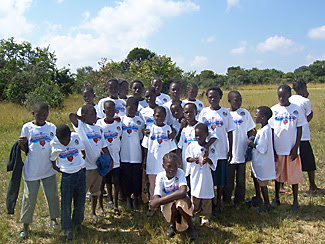 Images: World Vision, via The Christian Science Monitor
Posted by Stuart Candy at 1:26 am

Stuart: fyi I wrote about this exact neo-colonialism after last year's Super Bowl and tried to theorize it along with Virilio.

As the article points out, "by order of the National Football League, those items are never to appear on television or on eBay. They are never even to be seen on American soil." The negative energy cannot be allowed to return.

I had wondered why it was hard to find photos from the destination countries illustrating these stories -- given that destitute wearers of counterfactual championship merchandise seems to make for such a striking image... now I know.

Thus, the need for disposal. Once the positive semiotic energy of the winning jerseys and caps has been released, the losing jerseys are cast away like so much radioactive waste. Instead of burying it underground or ejecting it to outer space, however, the NFL ships it off to pollute Africa[.]

Semiotic waste is a very disturbing notion. Who cares about the messed-up symbolism if the actions are charitable? Shows how much more highly we value our own economy of signs -- much as we do our economy of goods.

Makes me wonder what the biteback could be -- that is; staying with the nuclear waste metaphor, what could be the cultural consequences, a generation or two from now, of burying today's semiotic waste out of sight, in others' minds?

Virilio: "[S]overeignty no longer resides in the territory itself, but in the control of the territory" (p. 132). And furthermore: "Whoever controls the territory possesses it. Possession of a territory is not primarily about laws and contracts, but first and foremost is a matter of movement and circulation" (p. 128).

The colonial soldier no longer needs to bring his muskets and bayonets to a foreign land to repress. Simply send over -- in the name of humanitarianism no less! -- gifts that say "loser" all over them. Do you begin to feel like a loser after a while?

I am curious about how the receiving cultures will ultimately remix these signs as a form of resistance or empowerment, if it isn't already happening now.