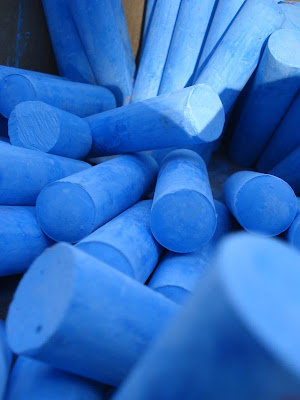 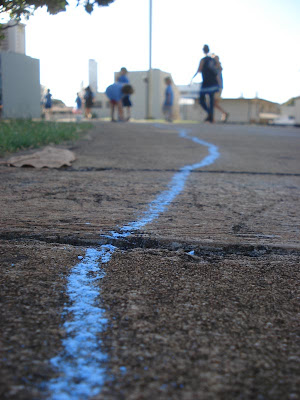 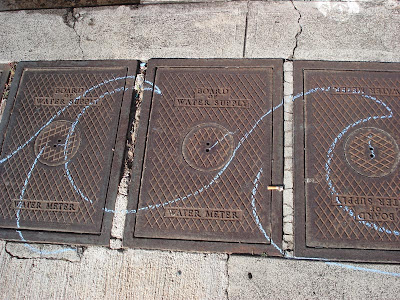 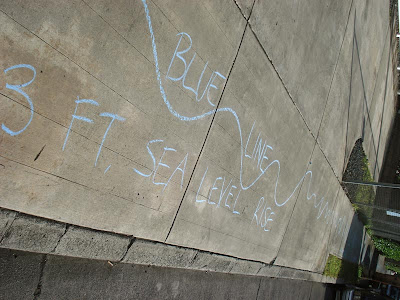 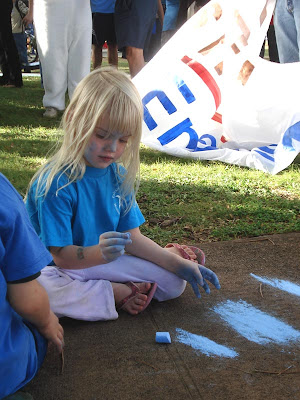 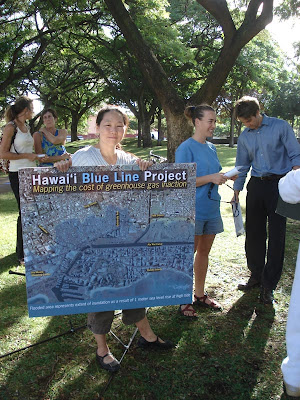 I took these photos last Wednesday, 30 January, while participating in a project to trace a blue line through the streets of Honolulu to show where sea level is expected to reach by the century's end.

The "Blue Line Project" was coordinated by the Hawaii chapter of ecological organisation The Sierra Club (whose President, Jeff Mikulina, we met last year -- mentioned in this previous post).

What occasioned this good natured bit of activism was that for two days last week, Honolulu hosted a climate change conference initiated by President Bush, for representatives of sixteen of the world's largest economies, as well as EU and UN delegates. The venue was the East-West Center (a.k.a. the "Center for Cultural and Technical Interchange Between East and West" established by U.S. Congress in 01960), a federal institution adjacent to the University of Hawaii at Manoa, and the organisation which pays for my fellowship to study there.

The talks, which were closed to the public, played out at the Kennedy Theater, which I can see out my window, right across the street, as I type. It was funny to be so close to an international news event and yet to have no access to it.

People I know here in Hawaii who take an interest in such things had good reason to doubt both the sincerity and the efficacy of talks initiated by a federal administration that has persistently denied any need for action on climate change. But they all recognised the opportunity to raise awareness both locally and internationally about these issues and attendant risks.

Bright blue chalk and duct tape were made available to the fifty or so folks who turned out at the Old Stadium Park in Mo'ili'ili, a few blocks southwest of campus, to participate in the action. I was especially happy to be involved, because this was an idea that Jake and I had at one stage hoped to incorporate into FoundFutures last October, before conceding that installing hundreds of artifacts in the streets representing a series of alternative future Chinatowns was probably enough to take on for one project.

A map distributed in advance showed where we would be tracing the blue line: 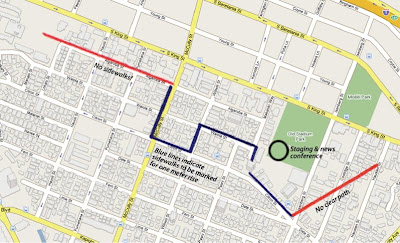 Which was based on part of the map projecting a one-metre sea-level rise produced by scientists at University of Hawaii, and discussed at this blog in October.

This particular blue line intervention is not the first project of its kind, but it is, I think, an interesting meme accompanying growing acceptance of the reality of climate change. By projecting possible futures into the present; feeding forward; embedding cues to consider alternative futures into our mental environment today; it represents an excellent example of what we like to call ambient foresight.

Beautiful, wish I could have been there.

The town where I live at the moment, Antwerp, will be heightening its wall along the river to avert the water. Our Dutch neighbors taught us all about that. And the sandbags are at the ready too.

So glad you could drop by... you guys would have really enjoyed the event, it was great.

You got me thinking about a local counterpart to the river wall project you describe in Antwerp ... generally speaking, net denial continues to exceed net action here in Hawaii. However, there are some organisations involved in mitigating risks associated with sea level rise; e.g. the Coastal Zone Management Program, whose aims, at least, make good sense. I do wonder if anyone has sandbags at the ready, though -- even figurative ones.