Sometimes it doesn't belong in a museum 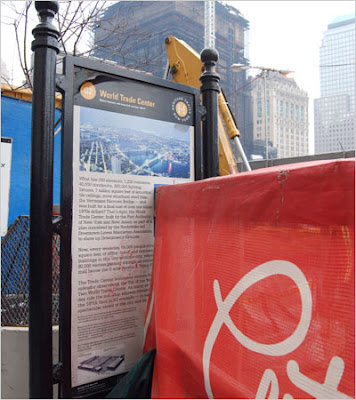 On one street corner in Lower Manhattan, the World Trade Center is still spoken of in the present tense, confusing some passers-by, enlightening many others.

"Now, every weekday, 50,000 people come to work in 12 million square feet of office, hotel and commercial space in the seven buildings in this city within a city," says the seven-foot-high Heritage Trails New York sign at Church and Cortlandt Streets, opposite ground zero.

The Alliance for Downtown New York, which maintains the 11-year-old Heritage Trails markers, has deliberately left this one untouched since 9/11 as an authentic — and poignant — remembrance of the trade center’s astonishing vitality.

But in recent days, the sign has been imperiled by construction crews working on the Fulton Street Transit Center.
[...]
It will be donated to the National September 11 Memorial and Museum at the World Trade Center, which is now under construction.
[...]
"We’re just honored and delighted to be the permanent custodians," said Jan Seidler Ramirez, the chief curator of the museum.

"The sign has been doing wonderful service — as it was intended — up until the last precarious few weeks of construction," she said, "because many visitors never knew the towers, never saw Lower Manhattan with the towers intact. I saw lots of people beginning to come up and read it and, for themselves, begin to process the present-tense description of the animation of the World Trade Center campus."

Ms. Ramirez said many passers-by "totally grasped the fact that this was a survivor artifact" and that foreign visitors whose command of English was not all that strong would probably not have been bothered by the anomalous verb tenses.

But she also said, "Others might have thought they were in on one of the biggest editorial gaffes of all time."

It's impressive that this sign has been preserved in situ for so long -- 11 years total, and seven six and a half years after 9/11, 02001. That is, it's been a "survivor artifact" in its present position for longer than it stood in the shadow of the WTC towers. These aren't huge timescales, of course, and little wonder that reconstruction at the site is finally relegating the object to a museum. The wonder is that, given the sensitivity of many Americans to painful reminders of the loss that day has come to represent, the sign has taken so long to be harvested and processed by the nostalgia machine.

And yet, I would venture, this fascinating anachronism is (or was? -- perhaps by the time you read these words, the past tense will be necessary) infinitely more interesting in the street where it stands (stood) than it will ever be in a museum, its future (present) home. That change of context is bound to render it safer and -- to precisely that extent -- more dull; just one historical relic among many, an occasion of cognitive dissonance and enlightenment no longer. Contra Indiana "That belongs in a museum" Jones, sometimes the valuable artifact does not belong in a museum, but can serve as a more effective and arresting portal to another time in its original environs; without extraneous explanation (or, in the words of Steven Johnson, "flashing arrows").

The bemused tourist encountering this sign in the street post-9/11 is unwittingly cast as an archaeologist of the recent past. She is challenged to come to terms with a fragment of a world gone by that is, as much as any ancient civilisation, irretrievably lost. The cognitive (re)construction process that, we surmise, has to occur in order to make sense of this experience, is symmetrical (but not identical) to the moment of encounter with an "impossible" future object.

That is to say, this report describes the moment of an encounter with a puzzling object which I think functions similarly to certain artifacts from the future. What we call "found futures" -- scenarios made manifest, then left lying around to seed such unexpected encounters -- are as this article says, "confusing" to some, and "enlightening" to others.

All of which leads me to the next concept in our nascent series about designing future artifacts.

One of the ways we think about the task of designing future artifacts is the idea of "reverse archaeology". After an archaeologist digs up an artifact of a past civilisation -- an urn, let's say, or a clay tablet -- they set about trying to deduce from its features things about the society which produced it (rituals, social structure, economy, and the like). When we design future artifacts, we almost always start from a written scenario of the future in question, the building of which provides the opportunity to consider its internal cohesion, its coherence with the present and with history, and so on. Therefore, whereas the archaeologist must deduce the "world" from the "fragment", we as multimedia futurists deduce the "fragment" (or fragments) from the "world" expressed in the scenario. (This is not quite the same as what Dator refers to as "deductive forecasting", which has more to do with the prior step of crafting the scenario around the structural features of one of the four "generic images of the future".)

The embodiment or encoding of the scenario thus accomplished allows the artifact finder to decode or deduce something about the world from which the artifact "came". But the encoding or mediation of possibility space at the design stage can be thought of as "reverse archaeology".

Now, another word about the puzzle posed by this (type of) sign. I want to suggest that, as described in the previous post, this disjuncture between the present tense of the sign and that past tense of what it describes is a "disturbing hole" (and we're not talking about the big one in the ground where the twin towers used to be). It may be tempting to assume that in communicating foresight, clarity is all-important; that an artifact which confounds is one which fails to communicate. On the contrary, we believe that such puzzlement is invaluable, a pedagogically priceless moment, a conundrum which the audience needs to struggle (ideally, only for a few moments) to resolve. To put such an object in a museum, where pieces of our other "worlds", previous times, are each designated their little soapboxes from which to declare their once-upon-a-time reality, all but neutralises their power to confuse as well as their power to enlighten. The two are inseparable.

Now, the trick is not to confuse permanently: we want to stop people in their tracks, but only for a moment or two. This is one place where the art of artifact design comes in. And inevitably, however well thought out the design, it won't function equally well for all comers. Comically improbable as it may seem, I have little doubt that some of the passers-by did indeed imagine, on seeing the WTC sign, that they had discovered some monumental "editorial gaffe".

I'm reminded of the bronze memorial plaque we installed on a Honolulu street corner late in 02007, a testimony to the resilience of the Chinatown community, and that of the island of O'ahu at large, in the face of a (hypothetical) tragic bird flu epidemic in 02016. 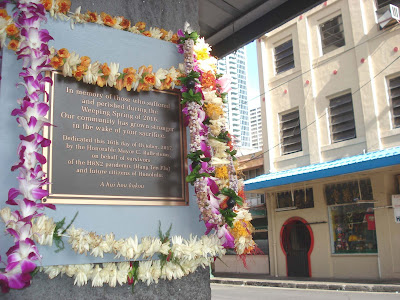 One of our favourite responses through the entire process of FoundFutures:Chinatown was from a woman who came across this sign in the street, and stood before it for a good few minutes, taking it all in -- the fresh leis; the scale of the tragedy outlined in the inscription (the likes of which the city has not seen since the 19th century); and the occasion of the memorial's supposed dedication 02017 date (almost ten years forward, to the day). "Ha!", she snorted, "They got the date wrong!" And she trundled off down the street.

To appropriate a quote attributed to Lincoln, you can't get through to all of the people all of the time.

But you can have a lot of fun trying.

Correction 16/05/09: So, maybe we didn't get the future date 'wrong', but my arithmetic on the post-9/11 lifespan of the sign was off by a year. Poetic justice: life's favourite brand of irony.
Posted by Stuart Candy at 9:05 pm