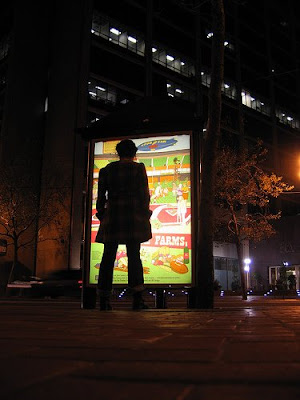 A public art project entitled "Wish You Were Here! Postcards From Our Awesome Future" has just concluded in the streets of San Francisco (press release):

The San Francisco Arts Commission's Art on Market Street Program's new Kiosk Poster Series by artists Packard Jennings and Steve Lambert features visions of a future San Francisco, including transportation improvements and other imaginative urban developments.
[...]
Artists Packard Jennings and Steve Lambert asked Bay Area architects, city planners and transportation engineers, "What would you do if you didn’t have to worry about budgets, bureaucracy, politics, or physics?" Ideas from these conversations were then merged, developed and perhaps mildly exaggerated by the artists to create six imaginative poster designs for exhibition in the Market Street kiosks.

The six original poster designs include a Muni of tomorrow, 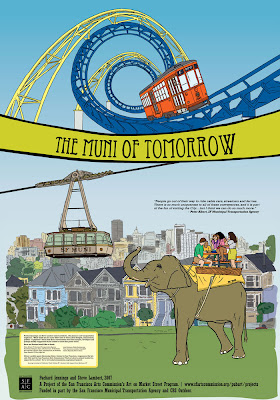 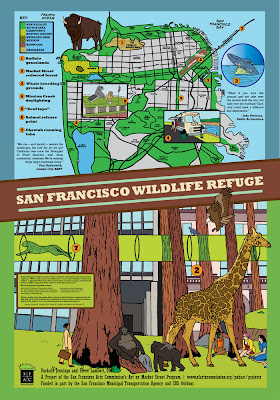 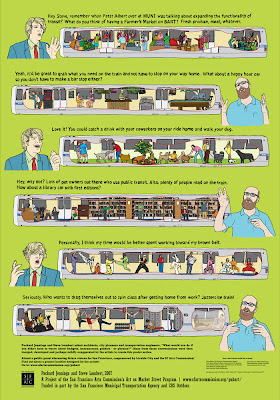 a farm in the Candlestick stadium, 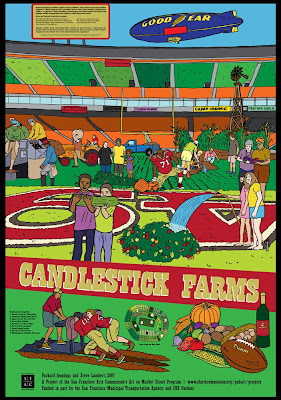 a new individual commuter line (literally) from the top of the Ferry Building in San Francisco to Oakland, 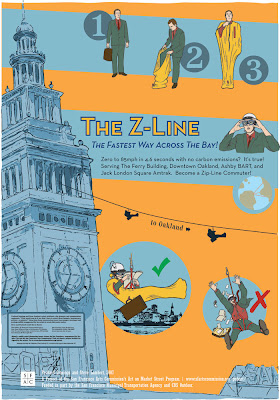 and suggestions for removing or moving unpopular buildings following a public vote. 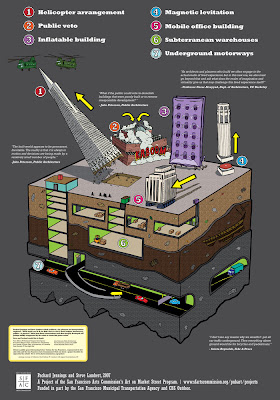 Packard Jennings and Steve Lambert, both together and individually, often collaborate with a wide range of people for their projects, which typically engage directly with audiences in public settings about social and political issues.


The artwork combines the schematic line-drawing look of airline safety cards with a warm, whimsical quality which recalls the Victorian-era images of the future associated with writers like Jules Verne. It's really nice to see the too-often sombre, expert-oriented discourse of planners and architects invite engagement with the popular imagination in this way.

It's interesting to compare this project to the Red Cross earthquake awareness campaign blogged here last May. To find such radically different forward views -- shattering vs upbeat -- appearing in different public art projects within the same city begs the question how people reconcile images of the future that are so dramatically at odds with each other... especially at a subconscious level, since few of us are trained to pay specific attention to the competing elements of the futures imaginary.

This is a question to address in more depth as we go along, but I want to mark that as being, in my view, among the primary ongoing tasks of academic futures discourse in general, and this blog in particular.

There remains an open invitation to all readers of t.s.f. who encounter manifestations of scenarios, or images of the future, in any medium, to submit them for inclusion in the evolving gallery of possibilities curated here. On that note, it was NYU media professor Steve Duncombe who emailed Jake and me about this project, which, he said, "seems to resonate with your FoundFutures work" [link]. Thanks, Steve!
Posted by Stuart Candy at 11:50 pm