Inside a Bold New Experiment in Public Imagination

They say the future is unwritten. It’s also UNTITLED. 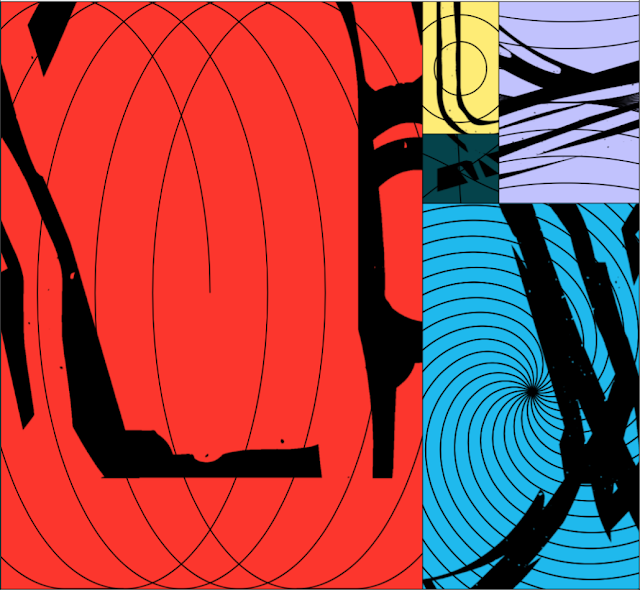 An exciting global initiative in support of public imagination kicks off this week with the launch of the festival UNTITLED (17 & 18 September 02020). It’s being staged online through the shared efforts of an alliance of activist and changemaking organisations from around the world, and coordinated by the Finnish nonprofit Demos Helsinki.
This is the first in a series that’s planned to run each year through 02030. As one of the founding curators I have to admit that this is an unusually turbulent and in many ways inauspicious-seeming historical moment for attempting to get a visionary collective action off the ground. But as you might imagine, that’s part of the point.
I ‘sat down’ virtually with one of the prime movers of UNTITLED, Demos Helsinki founder Roope Mokka, to capture the story so far and take a snapshot of how things look on the eve of this ambitious event.
***
SC: Roope, we had an exchange a couple of years back about a project you were working on with a set of 1.5 degree climate lifestyle scenarios — and you were wondering how to ‘get experiential with foresight’. Things have changed a lot since then! Tell us the story behind this initiative — how did it come about, and what’s motivating it?
RM: It really began with kind of an existential crisis in the think tank Demos Helsinki. To understand it one has to understand that we are an employee-governed organisation; we’re all ‘partners’, but we collectively own the organisation that employs us. What this means is that things such as impact are most valued, instead of growth of revenue, headcount, profit or other typical success goals for organisations that sell services.
A few years ago we came to see that, despite our ‘success’ (growing from 10 to 50 people, establishing international operations, and having ever-bigger strategic projects with ever-bigger governments, corporations and NGOs), we were still heading towards social and ecological collapse. Our impact measures were all going off the charts, but the world around us was falling apart.
At the same time we had been working on a large-scale societal vision and narrative project together with the Finnish innovation fund, Sitra. This was a unique opportunity to drill into what is particular in our age and its relationship to the future. One thing emerged above all, and that was that we are living in a new era, or even between eras, as Gramsci famously pointed out. Assumptions of the industrial era had proven false, and the post-industrial era had started everywhere but in the very structures that govern our life. The project came to be called Next Era.
So there was both organisational demand and a research basis for the need to reimagine the world around us. We decided that we had to set up a kind of platform where different organisations and people could come together and explore what the next society might look like. We also understood the need to go beyond projects, so we ended up initiating a ten year process. And this has to happen at a somewhat global scale, so that is part of what we are aiming for.
SC: Why the name UNTITLED?
RM: As we are talking about the ‘post-’world (be it post-liberal, post-normal, post-truth, post-industrial, post-capital(ist), etc) we remain the prisoners of the thing we aim to leave behind. The ‘don’t think of an elephant’ of our age is ‘don’t think of a post-capitalist era’.
Basically we lack images, names and ways to think about a world that has thoroughly transformed. We are more accustomed to betting on the future and competing in guessing what the future is, than doing the hard work of imagining and experimenting with what we imagine.
‘Untitled’ refers to the fact that we are incapable of naming and explaining what a world and human look like beyond all these ongoing transformations.

SC: This is one of the first large-scale experiments with a civically oriented public imagination or experiential futures program, and there’s sort of a theory of change built into it, isn’t there?
RM: We did not have a theory to start with, more of a ‘burning platform’. Now we’re getting there. In a nutshell it is: Refusing to go back to normal, imagining the unimagined, and experimenting with things that matter.
Our first assumption is that ‘transformation is one’; there are no separate sectoral transformations: post-capitalism — late capitalism — surveillance capitalism — crisis of capitalism––crisis of liberalism — decline of democracy — era of meritocratic autocracy — self-organisation — post truth — digital transformation — fourth industrial revolution — data economy — exponential technology — inner transformation — inner growth — awakening to holistic consciousness — deep adaptation — decarbonisation — climate crisis — post-fossil era — sixth wave of mass extinction — ecosystem collapse… these are all one. Or at least, they are only meaningful in relation to each other.
Some of us may have a preferred theory, vision or ideology that explains what happens when we follow one trajectory: for example, after capitalism comes a data driven planning economy; after liberalism comes meritocratic autocracy, and so forth. But these are fundamentally flawed ways of looking at the future. What is meritocratic autocracy after the sixth wave of mass extinction? Nothing.
If we start looking at these as one, we face a phenomenon of a different magnitude. Many old theories lose their ability to predict, as the premises of society, behaviour, economics and institutions change. From this two things follow: the fundamental categories disappear and new ones emerge. This has happened before; we speak casually about a nation, a worker, science, or money as if these have always existed.
What we are experiencing right now changes the fundamentals of who we are as human beings. In some sense, the material, social, economic, and technological transformations are piling up to an ontological transformation; a transformation in what we humans are. Understood this way, we should focus on imagination / the unimaginable. The word ‘transformation’ hints that something that already exists takes a new form, but that is not the case in ontological transformations, where many entirely new things emerge.
UNTITLED thus proposes a certain process of imagination and experimentation. It starts with refusing to go back to normal, continues with imagining the unimaginable, and leads to experimenting with others.
It’s a space for different imaginations, where people can build on each others’ imaginaries, and expand together their view of the untitled future. 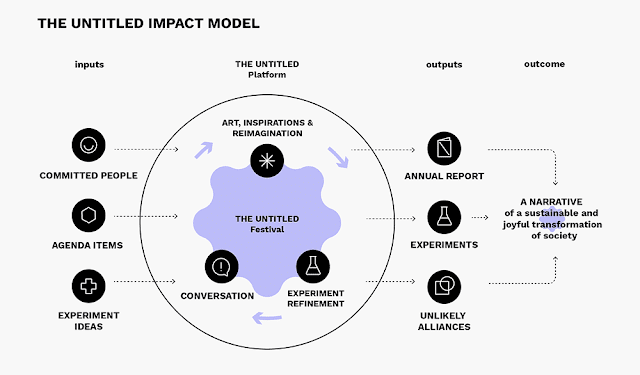 SC: I remember we started the planning conversations back in January, before any of us had even heard the name ‘covid-19’ — the novel coronavirus itself was still untitled! How did the event evolve with the pandemic?
RM: This has been a helluva ride and it ain’t getting easier! Launching a global process that centers around a festival in 02020? We postponed the main event, lost some funders and members, and redesigned operations, from a 100% onsite festival with some online access, to a 100% online festival with a small site in Helsinki.
In a way though, covid has helped: there is no need to convince people that there is no going back to normal and the need to reimagine the world around us.
SC: What other events, initiatives or institutions have provided inspiration?
RM: We started by looking at the World Economic Forum and Burning Man in particular. WEF has got huge agenda power — it gives permission to the elites to speak about difficult issues such as climate change and economic injustice. Burning Man has a unique modus operandi, supporting a very large annual arts event in the Nevada desert, and seeding an array of local ‘burn’ events around the world, with only 80 or so employees.
We also looked at different portfolio projects, from accelerators to governments’ strategic experiments. And of course, tons of participatory foresight and experiential events.
Then we looked at founding meetings such as those of the Situationist International, the Club of Rome (which was apparently a horribly bad experience), the Mont Pelerin Society, and all kinds of stuff really! I think we all hate traditional conferences, summits and networking events, so that helped as well, in scoping something new.
SC: Give us an outline of the program for this first year. What do you think is most exciting about it?
RM: We have some 400 participants, from 30 countries and 11 timezones; 60 sessions of arts, imagination, conversation and experimentation. Some really interesting experiments have been lined up, from ‘housing with income’ to ‘universal basic hope’.
The program is entirely co-curated by the founding alliance and that is what makes it special. We share a vision but have many different perspectives on it.
The festival starts on the (European) morning of Thursday September 17th with a set of conversations as well as art and imagination workshops. The same afternoon, we come together for the Ceremony for All, to elevate and open our minds. In the evening (that’s morning for Americas and beyond) we continue with conversations + art and imagination sessions. At the end of the day we gather to reflect on what we imagined.
On Friday 18th we focus especially on the practical side of imagination with experiment workshops where we plan and initiate real life experiments — this is the true crown jewel of UNTITLED, and something that we hope will develop to set it apart from other communities of imagination. That evening we gather again to close the festival and celebrate the start of the UNTITLED decade.

SC: Where would this be in 02030, if it unfolds as you hope?
RM: Well in 02030 we have the last year of operation, and that means we should have gone through many phases. Most importantly we should have experimented with all important institutional forms that the new era requires. The world will not necessarily have completely changed as a result of this effort (like it did not change immediately after the Mont Pelerin meeting), but the basic principles of change are there. We should have also involved a reasonably large part of the world’s population in imagination and experimentation, otherwise we will fail for sure.
SC: So this is very much designed as an iterative experiment; what should we be looking to learn from the first iteration?
RM: Now we are testing how this combination, the exploration of the ‘unimagined’ through arts and conversation, and the initiation of real life experiments, works together. That is the hardest part of what we are doing, I think.
It’s also an online festival. Luckily no-one knows what that means, so it’s not something that you can easily fail in!
***
Registration for UNTITLED 02020 has closed, but folks can explore the website, sign up for the mailing list, follow @imagineuntitled on Twitter, or attend one of the ongoing Untitled Imaginary Society meetups, which are open to all. Futures permitting, the next edition of the festival will take place in June 02021.
Thanks to Roope Mokka for this interview, and kudos to the entire team of organisers and participants for making the event possible.