Before getting ink, get pixels 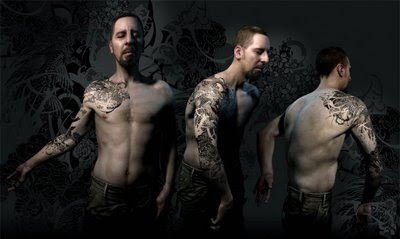 Previz -- Tattoo project
Image: Loïc Zimmermann, via CGSociety (also here)
Yesterday I came across a fascinating example of visualisation, or multimedia-enabled forethought, applied in an unusual domain: illustrating the body.

I've been thinking of having a tattoo for years and years now. Obviously I wanted to draw it by myself and I recently felt like I was ready for that.

My work at the moment consists in doing characters for a videoGame company, Quantic Dream, and to do so, after the casting is done, we use 3D scanners of the faces as a guideline for the modelling process.

I asked my fella Thierry, character supervisor there, if we could manage a scan session of my body and he said yeah ( I told you he's cool right?). 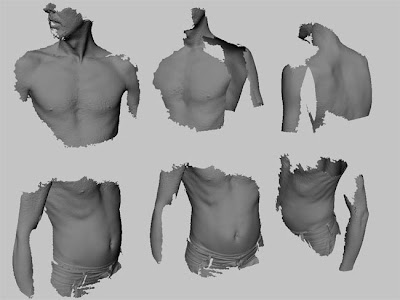 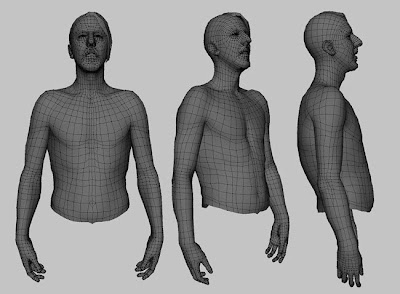 A wireframe topology overlaid on the assembled scan 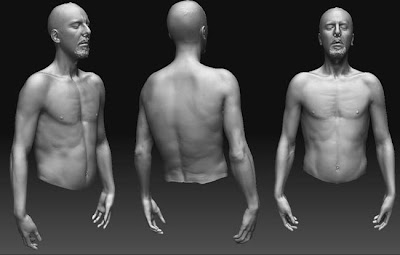 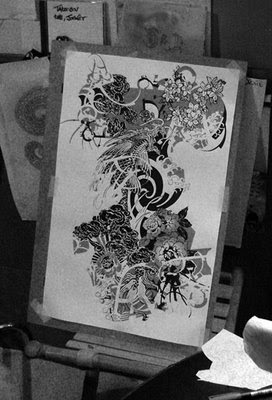 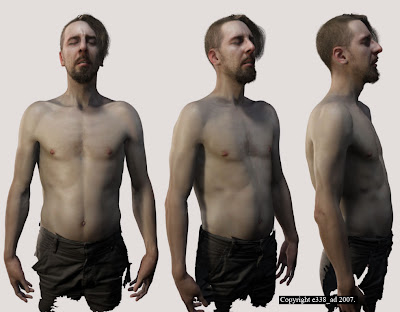 A rendered digital version of the artist's body... 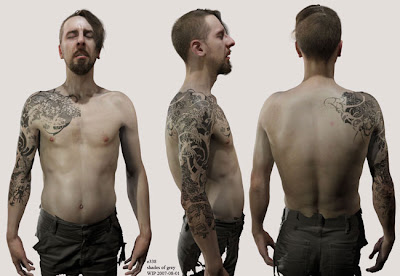 ...with the tattoo added
[See also this version, and a closeup here]
Zimmermann has written about the whole process in a series of posts since mid-02007... 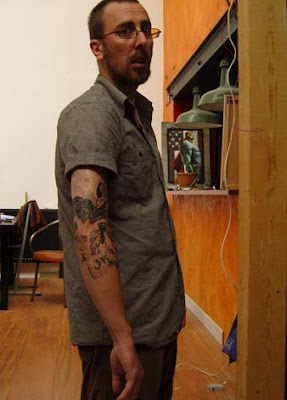 The work in progress, "après 11h de torture"
Photo via Loïc Zimmermann's blog
...announcing in March this year that this, his first tattoo, was complete. 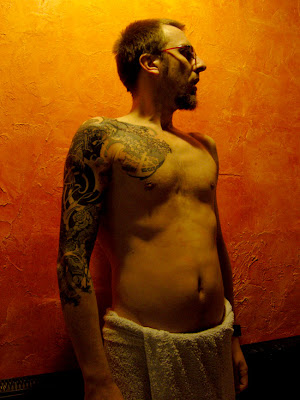 After more than 39 hours of work... done.
Photo via Loïc Zimmerman's blog
First things first: this is a shockingly great piece of artwork. Quite a few comments at his blog are to the effect that "I never wanted a tattoo, now I do". I see where they're coming from.

Second, Zimmermann's is a really interesting, innovative use of 3D modelling. Whether you happen to be interested in tattoo art or not, this process for visually thinking out a high-stakes personal decision represents a mode of engaging possibility that until recently was unavailable. A number of online sources [e.g.1, e.g.2] seem to be labouring under the misconception that this is a brilliant new turnkey program "invented" to enable the tattoo-envying masses to look before they leap. Unless the misconception is mine, at this point it's more in the nature of an extremely labour intensive artistic and personal investment on Zimmermann's part, done for his own purposes. But it does also strike me as the kind of application idea that may well become available before too long (if in a somewhat crappy, attenuated form) to Joe and Jane Internet, using multi-angle webcam shots and user-uploaded designs.

In recent months, we've come across a few interesting instances of wearable foresight aids -- the old suit, the empathy belly, and the alertness enhancing device. We've also seen a concept design for sanitising a dystopian future with a less distressing appearance. Here is a contrasting example of prosthetic foresight, not to be worn on the body but to imagine its transformation; an ingenious and rather lovely artist's hack of 3D modelling tools, powerfully envisioning a future state for Zimmermann to contemplate during his 40-odd hours under the tattooist's needle.

The tattoo has apparently delivered on its promise. This month he made a start on part deux.

Update (11FEB10): I wrote in Sept '08: "it does also strike me as the kind of application idea that may well become available before too long (if in a somewhat crappy, attenuated form) to Joe and Jane Internet, using multi-angle webcam shots and user-uploaded designs."

Now the Internet says: "Have you ever wondered what a tattoo or multiple tattoos might look like on you? Why not try it out virtually before you really get it done! You can use pre-loaded pictures and body art or upload your own. Another way to try it before you buy it, and it's all for under $10 for a whole year." Link (Thanks Sarah!)

Related posts:
> Facing future
> Fatigue, irritability, and much, much more!
Posted by Stuart Candy at 5:44 pm

Its quite astonishing to see how far we came with technology to have those crazy amazing graphics on computer screen now.. And plus to have it perfected to look like an actual person, thats just un-real.......
I cant wait to see what the future has waiting for us.. We're only advancing and upgrading, everyday..