The future of yesterday 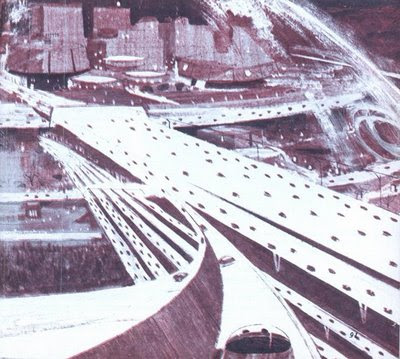 Detail from an illustration in Mechanix Illustrated, November 01968

IT'S 8 a.m., Tuesday, Nov. 18, 2008, and you are headed for a business appointment 300 mi. away. You slide into your sleek, two-passenger air-cushion car, press a sequence of buttons and the national traffic computer notes your destination, figures out the current traffic situation and signals your car to slide out of the garage. Hands free, you sit back and begin to read the morning paper -- which is flashed on a flat TV screen over the car’s dashboard. Tapping a button changes the page....

So begins a speculative "day in the life" article published exactly forty years ago, in the same month Nixon won the U.S. Presidential election, and the Beatles released the White Album -- and set precisely yesterday, 18 November 02008.

We don't tend to deal much with retrofutures here at t.s.f., partly because others do such a good job of covering them already (such as the blog linked above, and Matt Novak's Paleo-Future). So I don't intend to analyse this in any detail. But if you're interested, read the original (using the page-image reproductions rather than the transcript below them, for a better sense of the original). And see whether we agree on the following two points...

1. To me, the magazine ads are more interesting than the article itself. The garnish trumps the dish. These incidental, textural details of the past seem to afford, or betray, at least as much insight into the passage of four decades than the content which squarely addresses it. (This is not, however, a criticism of the author or publication: the piece was written for the audience then, not today.)

2. There's something weirdly counterintuitive about the inexorable way a specific future date and time, however far away it may be, eventually rolls around. Recently I've been reading about how our minds process time, and I see a connection here to what psychologists Yaacov Trope and Nira Liberman call Construal Level Theory [pdf]:

Or, to render a similar insight in more poetic terms, I'm reminded of a lovely, humbling haiku in Stewart Brand's Clock of the Long Now (composed in reply to one by poet Gary Snyder, p. 1:64):

This present moment
Used to be
The unimaginable future

(Thanks, Josh Judkins! | via Rocketboom)
Posted by Stuart Candy at 4:32 am