The Iraq War is over, Bush has been indicted on charges of high treason, the PATRIOT Act is to be repealed, the economy will be restructured, and public universities are now free. 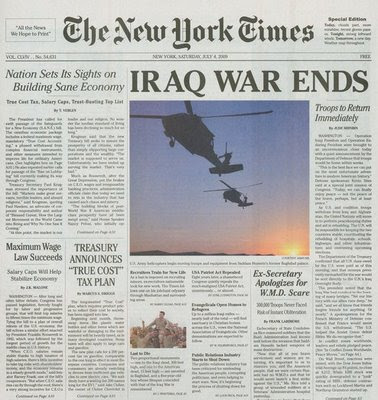 I awoke this morning to emails from two New York colleagues about a marvellous and painstakingly planned guerrilla futures intervention today in the Big Apple.

A "special edition" of the New York Times has been produced, to convey, through a detailed set of carefully crafted articles and advertisements, a near-future scenario in which progressives' dreams for the United States have all come true. And 1.2 million copies of it have been distributed for free around the city by a network of volunteers.

Alongside the print edition, a counterpart website has been launched where all the stories are available in full. Both paper and electronic versions are rendered impeccably in the newspaper's signature style, and are dated 4 July 02009 (Independence Day next year).

In scale, this is certainly the most impressive guerrilla futures campaign I've heard of, and I heartily congratulate all those concerned for pulling it off. (It seems -- according to Gothamist, citing Gawker -- that the volunteers were assembled via becausewewantit.org and the effort is being attributed to the Yes Men, guerrilla performance artists supreme, whose astonishing Dow Chemical/Union Carbide interview on BBC World was previously featured here.)

Now, we can expect that some disgruntled newspaper recipients or onlookers may accuse the folks behind this terrific intervention of leading people, shall we say, up the garden path. Such accusations will be missing the point.

Adopting the Times dress is not about hoaxing people; it's a way of calling authority to the vision. As well as being a proprietary media business, its actual status in our media ecology as an authoritative source of news, an idea which belongs to everyone even if the newspaper itself does not, is recruited to lend verisimilitude and weight to the cause.

As Jake Dunagan and I were recently discussing in another context, one of the many devices which makes the Orson Welles classic Citizen Kane so successful is its intermittent cutting to newspaper headlines that help tell the story. (Now, like any novel and effective cinematic trope, this has since become cliche, but this original fictional biopic application, referencing newspaper's authority to help put a frame around plot points in the biography of a larger-than-life newspaper tycoon, makes perfect sense.)

No one addressing more than the most cursory scrap of attention to the actual content of the articles will fail to notice that they are fragments of an "impossible" dream, even if a profoundly noble one: the wholesale transformation of U.S. political culture. Post-election euphoria notwithstanding, the kinds of change described in the "special edition" don't tend to happen overnight, if at all. But the paper quite deliberately calls precisely that into question -- why not?

Similarly, Professor Steve Duncombe recently said in his presentation at HRCFS on Dreampolitik:

These impossible dreams open up a space for democratic participation in the process of imagining the future, which also offers the possibility of escaping the tyranny of the present... for people to imagine, 'why not?', and 'what if?'


This Dream Newspaper is, to use Duncombe's term, an "ethical spectacle" par excellence.

Here's an in-scenario video about the campaign, also from the Times SE site:


Again, kudos to those who orchestrated this highly thoughtful, lovingly detailed, and timely piece of future-jamming. The sceptical futuryst doffs his virtual hat to you all.

Update (19/11/08): On Monday, my own copy of the New York Times Special Edition arrived in the mail.

It brings me so much joy to hold in my hands that it's almost embarrassing.

The difference between hearing about or seeing images of an impossible object, and experiencing it tangibly, is immense.

There's a colour-printed cover; National, International, Business and New York sections; political cartoons; and reports announcing massive legislative and social change around topics ranging from bicycle lanes to corporate criminality. The details in content, graphics, and layout of the 14-page publication are thoroughly splendid -- starting with the slogan "All the News We Hope to Print" on the header. It is, in short, a beautifully wrought artifact of the near-future.

The Yes Men's hallmark "identity correction" strategy is everywhere in evidence: the U.S. government recall notice for all gas-powered cars; advertisements reflecting drastic changes of strategy (or heart?) by companies such as oil giant Exxon Mobil and diamond merchants De Beers; a contrite farewell from pro-invasion columnist Thomas Friedman; and a Corrections section addressing repeated editorial lapses of judgement on the part of the Times itself.

For those unfamiliar with the strategy I mean, the following comes from a book manuscript about the Yes Men's infamous WTO intervention [pdf]...

As many readers will know, "identity theft" has become a major problem on the internet: scoundrels intercept personal information like your date of birth, residence, and credit card numbers, then have all kinds of fun at your expense.

What we have done is the opposite: we have found people and institutions doing horrible things at everyone else's expense, and have assumed their identities to offer correctives. Instead of identity theft, identity correction.


Their future newspaper manages to communicate sincere, blue-sky idealism not through earnest moralising or shrill propaganda, but through wit, irony, political satire, and the indisputable thereness of the physical medium whose mantle and idiom it borrows. A preferred future performed, with aplomb. Injected into everyday life, 1.2 million times over, for your consideration. This is one hell of a feat.

Even better, it strikes me as being part of something bigger, of which the Obama campaign and election was a more formal signal. That is, a coming of age, in terms of self-awareness and tactical savvy, of the American left. An answer to the call made in books like Don't Think of an Elephant and Dream.

But this particular effort deserves to be recognised as a landmark, an ingenious, street-level dissemination of one particular vision for American politics. It was a normative intervention more powerful, interesting, and just plain fun (why not, dammit?) than any number of pamphlets or TV advertisements; as outrageously ballsy as calculatedly logical. And one repaid handsomely in the true currency of human communication: attention. "The amount of media coverage the Fake New York Times stunt received was staggering. It spread to news outlets all over the globe like wildfire." (Urban Prankster, 14 November 02008)

It's true that these newspapers have been fetching quite a bit on eBay over the last week, but my copy is safely in the archive. One piece of a laudable future-jamming effort of unprecedented magnitude, which -- and I mean this in the most flattering possible way -- I hope will be outdone, many times over, as soon as possible.

I'm extremely grateful to Steve Duncombe for sending it (our man in NYC, who helped arrange the intervention). Thanks Steve! 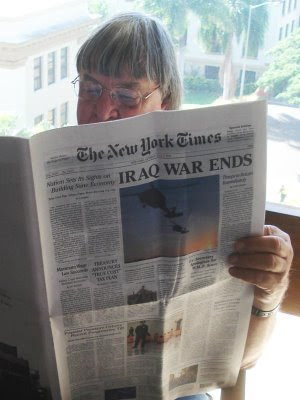 Jim Dator catches up on next year's news

(Thanks Jason and Victor!)
Posted by Stuart Candy at 5:40 pm