Today, a possible future to consider on the eve of the U.S. Presidential election. 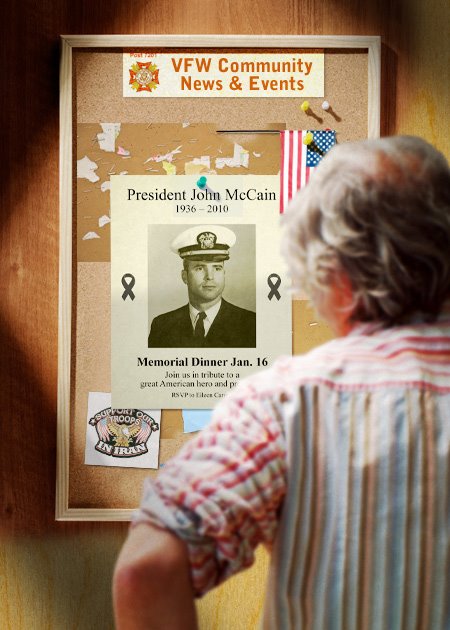 a FoundFutures meme | artwork: Matt Jensen
concept: Jesse Arneson and Stuart Candy
Update (05/11/08): Yesterday morning, before the vote counting had begun, and perhaps to do his part to restore some political (or karmic?) balance to the McCain future shown above, Matt forwarded to me an unusual future artifact in the form of a "Letter from 2012 in Obama's America", produced by Focus on the Family Action. This is an evangelical Christian organisation that I'd never heard of, but apparently it's quite the operation, with radio broadcasts reaching some 220 million listeners daily in 160 countries.

The letter deploys a strategy elsewhere used for purposes more thoughtful than wildly emotive (e.g., in James Fallows' 02016 memo to the incoming U.S. President, published in the Atlantic Monthly in 02005). But this 02012 piece of apocalyptica is an unabashed right-wing propaganda item, warning of a frankly Orwellian transformation of the U.S., within just four years of an Obama Administration. The piece is as impressively inventive as it is hysterical in the detail and scope of its vision. A USA Today report on 28 October sums it up:

Terrorist strikes on four American cities. Russia rolling into Eastern Europe. Israel hit by a nuclear bomb. Gay marriage in every state. The end of the Boy Scouts.
...
The imagined look into the future is part of an escalation in rhetoric from Christian right activists who are trying to paint Obama in the worst possible terms as the campaign heads into the final stretch and polls show the Democrat ahead.

Although hard-edge attacks are common late in campaigns, the tenor of the strikes against Obama illustrate just how worried conservative Christian activists are about what should happen to their causes and influence if Democrats seize control of both Congress and the White House.

The 16-page polemic culminates in a fully-fledged anticipatory guilt-trip for anyone considering straying from the Republican flock:*

When did all this start? Christians share a lot of the blame. In 2008, many evangelicals thought Senator Obama was an opportunity for a "change," and they voted for him. They did not realize Obama's far-Left agenda would take away many of our freedoms, perhaps permanently.

The 02012 future-letter affords a morbidly fascinating view of an extreme species of supposedly religious ideology that seems to have enjoyed considerable high-level influence in America in recent years, but is still so far removed from my own generally reasonable experience of everyday life in the U.S. that -- as for many both inside and outside this country -- its viability and appeal remain a source of puzzlement.

By the way, Obama won.

Related posts:
> Future news-flash: your vote counts [*The hell-on-earth scenario above compares interestingly to the playful guilt-inducing gambit in this pro-Obama mailout from MoveOn.]
> Death of an ex-President
> Found futures

(Thanks Jesse and Matt!)
Posted by Stuart Candy at 9:51 pm

If you need to take actuarial tables into account to pick a president, you clearly haven't been paying attention.

Anonymous, I agree. But in this carnivalesque mediascape, attention is attenuated at best.

For evidence of comparable lapses we might look to the last two Presidential election outcomes. But it doesn't stop there. This collective sleepwalking is confined neither to the political arena nor to the United States.

Still, governance decisions at this level do matter, and with 5% of American voters undecided on election eve -- and a whole lot more seemingly changing their minds from moment to moment -- you never know which flash of insight (or foresight) might make a difference.