A gallery of props from non-existent movies. 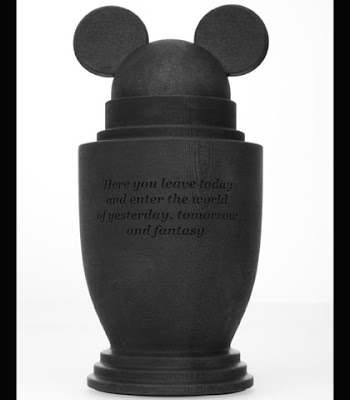 An artifact from The MacGuffin Library (02008) by Noam Toran and Onkar Kular
Image via Electric Sheep Magazine
Legendary suspense film director Alfred Hitchcock famously used the term "MacGuffin" to denote the object in a movie narrative which would drive the plot forward: "In crook stories it is almost always the necklace and in spy stories it is most always the papers." The MacGuffin, in other words, is a sort of embodied pretext, however flimsy, for the conflicts and other relations between characters, which is where the true dramatic potential resides.

Artists Noam Toran and Onkar Kular have recently run with this concept in an interesting direction by setting up a library of MacGuffins from hypothetical films, as part of an exhibition called Wouldn't it be Nice... Wishful Thinking in Art and Design, at central London cultural venue Somerset House.

The MacGuffin Library proposes the foundations for a library of MacGuffins, produced by first authoring a series of film synopsis' [sic] which are used to inform a collection of objects to be designed, manufactured and catalogued. The film plots address themes stemming from a disparate range of interests and inspirations: Re-enactments, unorthodox fantasies, Borges and Carver short stories, forgeries, urban myths, high and low brow cinema, alternative histories, and the relationship between media and memory.

The objects were manufactured on-site with a 3D printer [video via moleitau's Flickr photostream] and placed alongside their paragraph-long "film synopsis" counterparts. 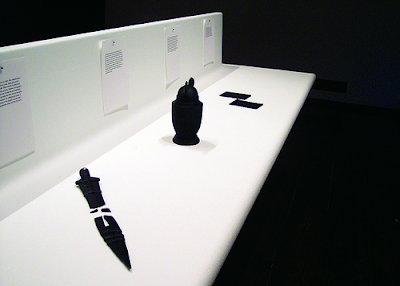 Although we are not making the film we are hopefully producing a space between the object and the synopsis where an audience can create the film themselves, and where they can think of what we are intending to present cinematically.
...
It’s the beginnings of a library, but that library is one that is based on a process of producing a piece of work. And we’ve found that this medium, the object and the synopsis together, is the basis for conversations that we have between ourselves about art themes and other interests that we have, for example, alternative histories, unorthodox fantasies, the way cinema influences reality and vice versa. To some extent, we hope that audiences will also add their own ideas to that, and that the library will become an open source.
...
Some of the MacGuffins are based on films that we wanted to do, one in particular, that I wanted to do. Getting the budget to produce this film is currently totally unfeasible, so actually getting it out there in this manifestation is great.

This hypothetical film-prop approach resonates with our "tip of the iceberg" principle of future artifact creation (compare this work, for example, to the Americana: Hawaii exhibit that FoundFutures did a couple of months back). There's a resemblance both in the invitation to imagine the scenario cinematically, to fill-in-the-blanks opened up between object and story synopsis, and also in the strategically economical evocation of an idea or narrative which may be too large and expensive to manifest in a more fully-fledged representational format (e.g., by making the actual films).

In light of this it's no surprise to me to learn that Toran and Kular are associated with the Anthony Dunne and Fiona Raby school of hypothetical product design at the Royal College of Art. Indeed, Toran's work Accessories for Lonely Men (02001; see this Régine Debatty interview from 02006) was part of the Design and the Elastic Mind exhibition at the MoMA earlier this year (noted at this blog a while back), together with the work of several other RCA alumni, whose artifacts were conceived and produced specifically to spur imaginations and conversations around various future scenarios. (The future artifact-like work of Dunne and Raby and their talented design-school protégés remains a topic for me to address here in much greater depth.)

Meanwhile, props to Toran and Kular for a really interesting installation.

The MacGuffin exhibit came to an end on 5 October, but the larger show of which it was part (Wouldn't It Be Nice...) runs until 7 December.

(via Magical Nihilism)
Posted by Stuart Candy at 4:39 pm