What if unions were software? 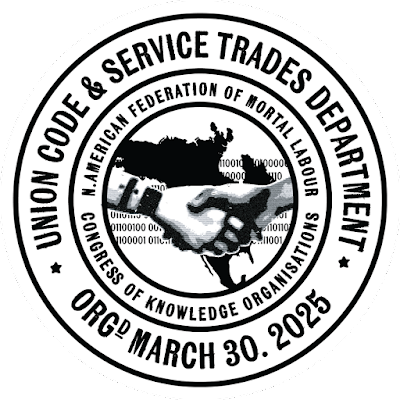 On this day, Canada and the United States commemorate the contributions and hard-won rights of workers, which began to be recognised in the late 19th century.

Noting the significance of the annual Labour Day holiday (or Labor Day, if you insist), the former President of the Canadian Labour Congress once observed, "Lots of people lost their lives in order to establish the right to refuse unsafe work and the right to be treated fairly and without discrimination."

But what if the role and goals of unions were to be embedded in the algorithms pervading the operations of 21st century organisations? If, as Lawrence Lessig declares, "Code is law", what if unions were software?

This full-page advertisement from the year 02035 appears in the current volume of MISC, "a journal of strategic insight and foresight". The issue's theme is Women. 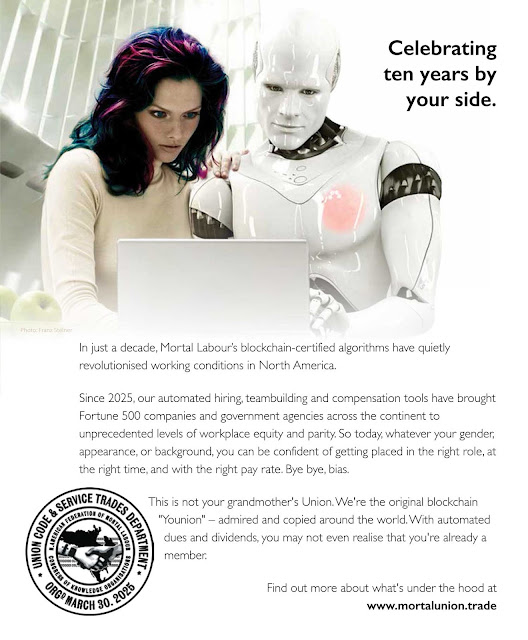 Since 2025, our automated hiring, teambuilding and compensation tools have brought Fortune 500 companies and government agencies across the continent to unprecedented levels of workplace equity and parity. So today, whatever your gender, appearance, or background, you can be confident of getting placed in the right role, at the right time, and with the right pay rate. Bye bye, bias.

This is not your grandmother's Union. We're the original blockchain "Younion" – admired and copied around the world. With automated dues and dividends, you may not even realise that you're already a member.


This is the work of Christine McGlade, founder and creative director at Analytical Engine Interactive, and Ryan Taylor, a practising impact designer. Both are MDes candidates in Strategic Foresight and Innovation at OCAD University, and they cooked this up while taking my class in Experiential Futures last semester.

The following page in the mag's print edition explains:

In light of the trends currently unfolding in the fields of artificial intelligence, workplace culture, and social values, we hypothesize a version of the year 2035 in which gender equality in compensation, distribution of power, and recognition are realized – finally – by taking flawed human decision-making out of the equation. On this basis, we generated an office artifact from the year 2035: an advertisement for the Union of the Future.

In this version of 2035, education, placement, recruitment, hiring, and team formation are all controlled by an algorithm. The “Younion” perfectly matches tasks that need doing with individuals who have demonstrated the competencies suited to doing them. Blockchain-certified, the Younion guarantees team diversity, optimum innovation, and absolute wage parity based on value and not gender. The Younion takes the bias of the bottom line.


The ad does indeed start to look like a fragment of a possible, and in some ways quite upbeat, future, considering the rapid rise in workplace automation reducing availability of human jobs; the integration of algorithms into hiring processes to offset human bias; the emerging use of blockchain technology to enable independent verification of a candidate's qualifications (such as university degrees); and the potential of labour organisations to accept the challenge of developing new models for protecting workers in the face of technological disruptions.

By the same token, we would be wise not to overlook the potential for these variables to net out the opposite way –– with more elaborate, technologically black-boxed bias, at least as opaque as analogue decision-making has ever been. The notion of a blockchain-enabled, bias-busting "Younion", then, is perhaps a positive vision of what law professor Frank Pasquale calls for under the banner of algorithmic accountability. 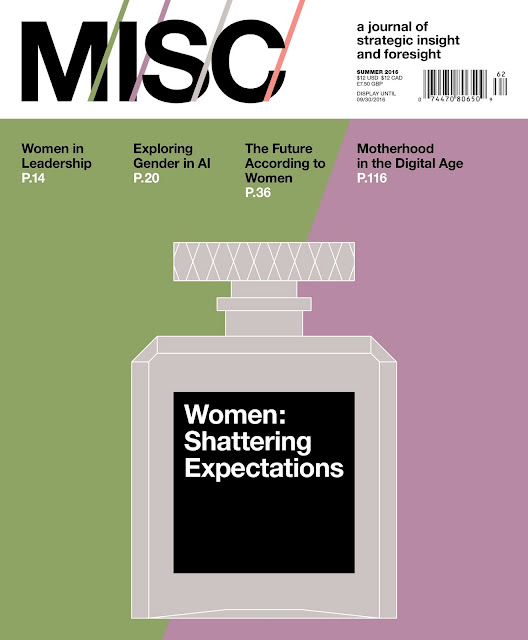 The choice of "Women" as the theme for this issue followed a widely read article in The Atlantic last year claiming a dearth of women in futures, which prompted a valuable discussion among members of the profession, and the appearance of at least two lists of female futurists practising around the world.

MISC is out now on newsstands, and available to order here.

A pdf of the special feature "The Future According to Women" can be found here.

Special thanks to Franz Steiner of Steiner Creative for permission to use the image appearing in the ad.

Much appreciation to Ashley Perez Karp and Emily Empel of Idea Couture for sharing the published material back with us.

And well done to Christine and Ryan for a deft and timely piece of experiential futures work.

I find it pleasing to contemplate the in-world (diegetic) advertisement as a next-generation twist on Wired's long-running and creatively inspiring feature Found: Artifacts from the Future, which sadly was consigned to the past in 02013.