The EGS June session this year involved a day-long excursion to the Venice Biennale, which had begun just four days before our 14 June visit. Arriving bright and early after an all-night bus ride from the cosy alpine confines of Saas-Fee, I found myself somewhat punchdrunk by the combination of sleep deprivation and the sudden superabundance of contemporary art, canals, and edible food.

Though I didn't make it through the entire exhibition (having only scratched the surface of the vast Arsenale collection when closing time crept up on me), I did manage a pretty comprehensive tour of the Giardini's international pavilions. 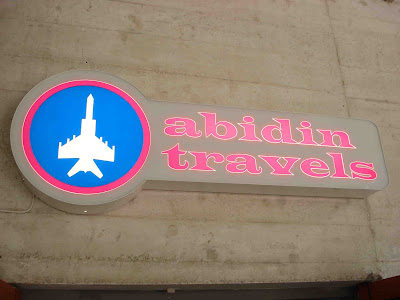 Probably my favourite part was in the Nordic Pavilion; an installation by an Iraqi artist living in Finland, Adel Abidin. It took the form of a sort of fly-by-night, threadbare tourism agency called Abidin Travels. Entering a small concrete room, you see a TV suspended from the ceiling, looping an upbeat, Vegas-gaudy tourist infomercial with a vacuous voiceover extolling the wonders of war-torn Baghdad (see stills below), imbued with gleefully dark humour reminiscent of Paul Verhoeven's Total Recall. 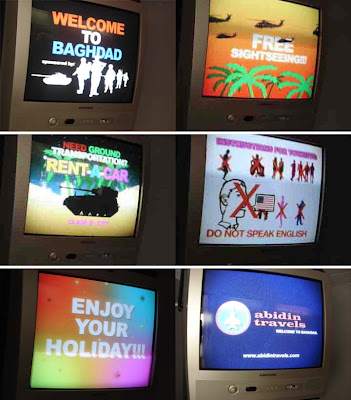 Through a narrow doorway into another small room, unadorned but for a TV playing uncensored footage from the bloodied streets of Iraq. No commentary supplied, but the advertisement's "Welcome to Baghdad!" echoes from the other room.

What makes the exhibit work, though, from my point of view, is a novel opportunity given to become part of it. Before leaving the area, you join a queue for access to a computer set into the wall, and through the faux "Abidin Travels" website, enter your name, city of departure and meal preferences to book a one-way flight to Baghdad. The graphic interface is convincingly busy with optional extras, and the content peppered with macabre comedy: "We suggest that you take some good life insurance you will need it!" All questions duly answered, it physically spits out your ticket then and there; a souvenir of the experience to take away together with a glossy (sticking with the theme, also grimly ironic) Abidin Travels brochure in any of seven or eight languages. 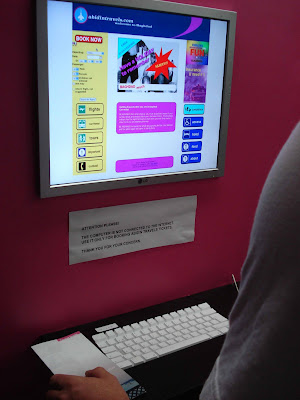 I appreciated the subversive political conscientiousness of Abidin's installation, which avoided the seemingly ubiquitous art traps of obtuseness and self-indulgence with a straight-for- the-jugular approach. The brutal irony of commodifying war-torn Iraq, a hell on earth that most of us experience reluctantly, if at all, at arm's length via news reportage, highlighted the absurdity -- not to mention the obscenity -- of this violence as well as its tacky, mercenary raison d'être.

This was, I felt, a kind of immersive scenario which sought to implicate the visitor more deeply than as a mere observer -- of the artwork, as well as of the war. What I most liked about it was the type of engagement produced by an interactive, satirical take on the now-familiar ritual (to middle class Westerners) of online airfare bookings and tourist kitsch.

Something that one of my EGS professors, Sandy Stone, said towards the end of the summer session has been bouncing around in my mind since then: "Theatre is a machine for producing a different kind of consciousness." The notion of consciousness-producing machines strikes me as one of those generous, substratum kinds of ideas which lends itself interestingly to other domains. For one thing, it helps me understand why I've become increasingly intrigued by a fuller spectrum of media than I used to think about (now including sculpture, installation, and audio walks, for instance). As a futurist I think a major part of the job is to encourage people -- including ourselves -- to "seriously entertain" hypothetical futures. That is, to see how far their logic -- and affect -- can carry you. So, in trying to make a previously unexamined (or examined and dismissed) scenario appear realistic and striking, then why not stay open to using the full panoply of available communicative strategies? A futurist is, in this sense, an agent for producing a particular type of horizon-expanding consciousness, and any art form is fair game.

I wasn't all that interested in using theatre before, either, but why the hell not? As one of the variety of "machines" on the menu of consciousness production, there are no doubt things it can generate, induce or communicate (insights, feelings, ideas) that are hard or even impossible to achieve any other way. In fact that's pretty much precisely why we at HRCFS ended up doing what we did with Hawaii 2050. The original idea was to produce four galleries of artifacts (like museum exhibits under glass), ostensibly "from" four different versions of the year 2050. As we toyed with this plan, however, it became clear that some sort of a performance could be much more effective than a set of inert objects. So we used improv actors working with semi-scripted scenarios, designed each room to serve as a tip-of-the-iceberg, a window on the world imagined in each scenario, and we conscripted visitors inside the fourth wall. 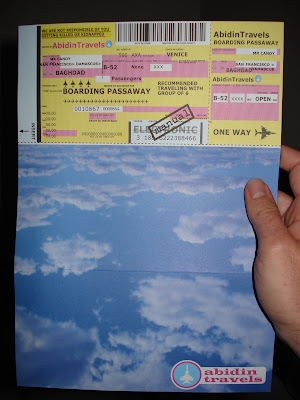 Abidin used a different range of media from what we did, and didn't use live performers -- I don't want to draw too long a bow with this comparison -- but his work here does seem to have a kind of underlying similarity of intent... cast the unwitting observer in a role, get them on the hook and involve them physically in the world you've created. Give them something to do, and something tangible to take home, and the transaction is consummated: they've become part of the scenario, and (to the extent the trick succeeds) it's become part of them.

"Abidin Travels" seems to me to be a kind of art that's needed now -- an art that is unafraid to make sincere political critique (as opposed to gratuitous feather-ruffling), and that is at once highly serious and extremely playful. Art that doesn't use its privilege for self-serving purposes, but that takes the opportunity, the focused attention it attracts, to produce a different kind of consciousness. It seems to me that the experiential scenario (whether set in a future or not) is an artform whose time is now -- and I have my ticket to Baghdad to prove it.
Posted by Stuart Candy at 10:39 pm