Footwear for a warmer world

No one seems to have found the original source, but this striking image of high-heeled rubber flippers has recently been doing the rounds online. It was drawn to my attention by a fellow attendee at the Bay Area Future Salon last Friday (thanks Pat) during a conversation about the FoundFutures postcard campaign. 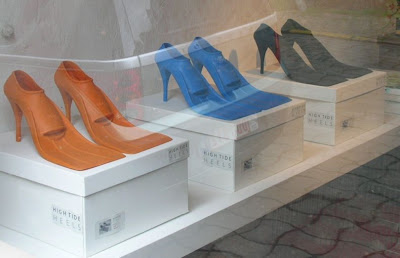 I subsequently found that Bruce Sterling had blogged this under the heading "Global Warming Beachware", and as he points out, the shot has been doing heavy viral business in the echo chamber that is the blogosphere. (At the time of writing, about 10,000 hits are returned by google for the otherwise unlikely phrase "high tide heels", which appears on the label attached to these shoeboxes.)

What's interesting to me, with the image being unattributed (and in that respect rather mysterious), is the variety of responses to its ambiguity. Some folks are treating it as a failed fashion statement, some are preoccupied with whether it's authentic or an art project, and some question the originality of the design by referring to an earlier version. I prefer the artifact-from-the-future reading (c.f. Sterling), seeing this as a playful real-world variation on Wired magazine's back-page feature that's been running for a few years; most recently, this image from the August 02007 issue. One of the differences between a future artifact that appears in a known location, where you expect to find it (e.g., a regular slot in a technology magazine), and an artifact that is "set free" online -- or physically in the streets, as we've been doing -- is surely this greater scope for ambiguity. In the former case you can safely pigeonhole it as a nifty piece of artwork. But encountered in an unexpected context, however, its existence begs certain questions about its ontological status: is this thing real? That cognitive dissonance seems to lend itself to being thought about in more detail, and discussed with others.

So, apart from it being kind of unusual and cool, I'd say there are two related reasons for the high traffic in this footwear image: first, it strikes a chord with people for different reasons, as suggested by the various responses noted above -- fashionistas, shoe lovers, scuba divers, art people, and futurists all find their own source of appeal here. Second, it's puzzling. Without accompanying explanation, we can't categorise it right away, and it may make more of an impact, perhaps reaching a viral-transmission tipping point, as folks chatter about what they don't understand (for instance at Snopes).

Similarly, the varied responses to the Hawaiian postcards-from-the-future campaign [images] illustrate the power of ambiguity to provoke thought, generating alternative possible explanations for these future artifacts.

"I thought maybe it's something to do with sovereignty," said Maynard's executive assistant, Joan Ellis. "Then I thought it was some sort of promotion that someone was using to pique interest."

But an additional quote from the same source that did not appear in the brief Honolulu Advertiser report from which the above is extracted was in response to the fourth day's postcard, which came in the form of a plea directed to the United Nations for help from a beleaguered, post-hurricane Hawaii of the future. 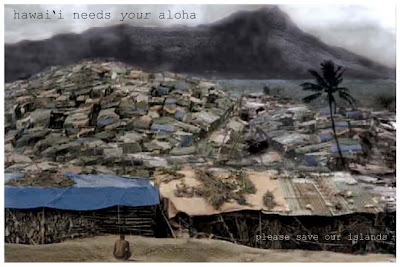 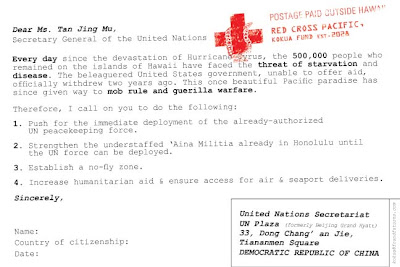 Perhaps, reflected this recipient, the islands have indeed been "dodging a bullet" every hurricane season. Hmm. There's an interesting thought.

Meanwhile, I'm content to co-opt High Tide Heels for our evolving gallery of artifactual "found futures" interventions (on which, more background at this HRCFS blog post). And if I happen to discover whence this fancy footwork came, I'll be sure to let you know.
Posted by Stuart Candy at 10:04 pm