Future-shock therapy in your pocket

A few years ago in an Oxfam bookstore in Canterbury, England, I stumbled upon a book called Mind Invaders: A reader in psychic warfare, cultural sabotage and semiotic terrorism (Serpent's Tail, London, 01997), a fascinating little paperback full of learned, anarchistic mischief. Among the many pleasures of this collection was an introduction to the Situationist International practices of psychogeography (which eventually fed into my interest in audio walks), an essay on psychogeographic poker (a variation on the wildly popular card game which at the moment seems oddly invisible to Google's all-seeing eye), and three-sided football, an idea which intrigues and delights me to this day.

So, Mind Invaders was edited by one Stewart Home, and when I sought recently to better acquaint myself with his other activities, I found out he's a sort of multimedia performance artist based in England, who says the following in his mission statement:

I have sought performativity on a wider social canvas. What interests me is not finished products, but rather the social relations among those from whom process based cultural forms emerge in new and exciting ways; and the means by which these forms can be utilized in a more general move towards disalienation.

Interesting how this echoes with Sandy Stone's strategy of performing her theory, which I noted yesterday in response to a comment on an earlier post.

Anyway, among Home's works is this provocative artifact, the Necrocard (click the image to enlarge): 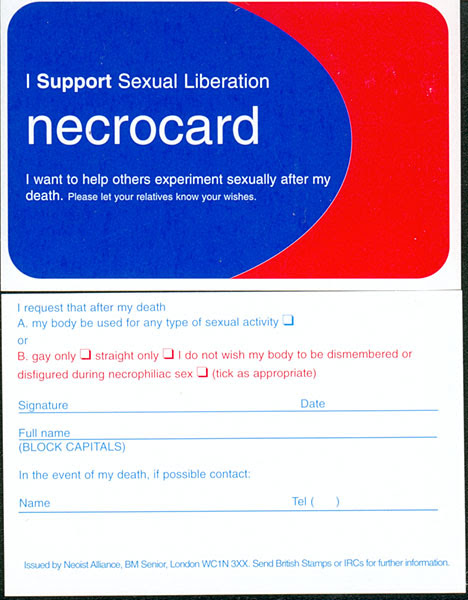 [B]ased on the NHS [UK's National Health Service] organ donor card [link to image], the necrocard provided people with a means to indicate they gave their consent for necrophiliacs to have sex with their corpse after their death. The necrocard was distributed by various means, including simply handing them out on the street in the west end of London, which produced some interesting reactions. I had fifty thousand of these cards printed in 1999.

Elsewhere, Home says more about the origins of the project:

As I've got older I've found my thoughts fixed increasingly firmly on the big issues that fascinate anyone whose mind has a philosophical bent, that is to say sex and death. Since I wished to address the relationship between these two issues, I decided to issue donor cards enabling those who carried them to leave their body for sexual experimentation. Getting the art work together wasn't a problem, I simply copied the design of NHS donor cards but changed the wording.
...
As far as I can see, if sex is consensual then there is no reason for there being legal sanctions against it.

To be honest if I was given the opportunity to have sex with a stiff, I'd probably pass it up. However, if prior to their death someone has given their consent to necrophiliac sex, then I don't really see what moral objections can be raised against it.

He goes on to provide descriptions of the mixed reactions to the experiment, which are illuminating; I especially like this observation: "I encountered several individuals who were clearly alarmed by the fact that my necrocards used humour to raise these serious issues. Several people said they thought the cards should either be serious or a joke, not both." This provokes me to consider that the kind of hybridity, ambiguity, and spirit of serious fun referred to here is fundamental to the futures (and other) work I find most valuable. Alternative futures are thought/emotion experiments, and in a spirit of academic as well as artistic exploration, I believe we should experiment with them fearlessly.

So, while I'm not particularly captivated by the idea of an opt-in body donor system for necrophiliacs, at a more general, process level I applaud this approach to calling into question an inherited social taboo. The beliefs, attitudes and practices we don't question are the ones liable to get us into trouble in times of accelerating change. Tradition is habit on a pedestal. We need to consider, case by case, whether each belongs there on its merits, and therefore be prepared continuously to discard or reinvent them.

Though not explicitly a future artifact, Home's Necrocard could be regarded as part of a broader set called the hypothetical artifact, or embodied simulation. Its most important features are its eerie combination of familiarity (or realism, because of its sheer materiality) and fantasy (or impossibility, in the case of artifacts from a future that has clearly not yet come to pass). This seems to generate a cognitive dissonance that can be met with dismissal, or irritation (blame the artifact!), but which to my mind is best resolved by thinking through the questions it begs: where does this thing come from, what kind of world (could have) produced it, and, most interestingly , what does my reaction to it -- aversion, surprise, delight, boredom -- say about me?

To administer a mild trauma relating to a plausibly imagined possible future, and then work back from there: this is the essence of future-shock therapy.

Home's playful experiment is not unlike those that my colleague Jake Dunagan and I have been undertaking with our ongoing project thread, FoundFutures. He locates it in his portfolio under Performance > Social Sculpture, a term I hadn't seen before and which I followed back to German artist Joseph Beuys (01921-01986). Beuys had the following to say about "Social Sculpture":

My objects are to be seen as stimulants for the transformation of the idea of sculpture. . . or of art in general. They should provoke thoughts about what sculpture can be and how the concept of sculpting can be extended to the invisible materials used by everyone.

That is why the nature of my sculpture is not fixed and finished, processes continue in most of them: chemical reactions, fermentations, color changes, decay, drying up. Everything is in a state of change.

He had a bunch of those cards left over. He had thousands of them printed for free (exercising a favour a friend owed him). He always carries loads of flyers and weird stuff around with him.