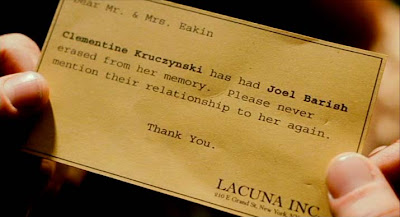 In my view, one of the best feature films of the last ten years is the scintillating Eternal Sunshine of the Spotless Mind (dir. Michel Gondry, 02004). While researching it for a term paper, I discovered that the story originated with a kind of "found futures" art concept...

It all started at a Brussels restaurant when my friend and artist Pierre Bismuth challenged me with this concept: "What if in your mail you find a kind of official card stipulating: 'We are acknowledging, Monsieur Gondry Michel, that Lisa Brook had you erased from her memory. Please don't try to reach her.' Pierre wanted to randomly send these cards to people and study their reaction."

Gondry found this idea too enthralling for it to remain a small scale performance art project, and the rest is movie history. In case you haven't seen it yet -- well, first of all, you should, but it shouldn't spoil the experience for you to keep reading now -- the story plays extensively with layers of perception and time, so frequently you're unsure whether what's onscreen is the "real time" experience of the characters, a reconstructed recollection, or a fantastic composite of elements. It takes at least a couple of viewings to keep your bearings throughout, which oddly does not detract from enjoyment, but rather (for this viewer at least) deepens it.

I am fascinated with the idea of actually doing what Bismuth only got so far as suggesting, an influence which probably manifested in our recent postcards-from-the-future campaign (a connection that's far more obvious in retrospect). But, though Bismuth's splendid guerilla art initiative was duly sacrificed for the benefit of the larger audience eventually reached by Eternal Sunshine, it's interesting -- and, it seems to me, telling -- that part of the film's promotional strategy involved taking this thought experiment (what if selective memory erasure were possible?) and carrying it into "realistic" (tongue-in-cheek, yes, but attempts at stylistically and diegetically consistent) "artifacts" from the world of the film.

And a low-rent TV spot:


I can't yet fully articulate what it is that works (or does not) about Eternal Sunshine's example, regarding the maintenance of coherence in the way scenarios are communicated -- the art of diegesis. But I think designer Matt Jensen (aka Tokyocrunch), is right on target in his terrific response to the "Simpsons simulacrum" post which recently appeared here:

I was similarly disheartened by the compromises the Kwik-E-Mart promotion made to the fourth wall (plastic stand-ups? blech.). [...] Promoverkill like this is a testament to the flatness of marketers and their unwillingness to accept the power of the cognitive bridges we, as a semi-intelligent audience, build between concepts. [...] It seems an awful waste of effort to build a universe only to break it.

The artifact's universe is a fragile creation whose creators undermine the beauty and -- I think this is a the key word -- integrity of what they make, with flashing arrows and elbows in the ribs. Jensen again:

I'd imagine that somewhere on that oh-so-authentic KrustyO's box is a reminder of the movie opening date and official movie URL, just like they have on the "real" boxes in the animated universe. [...] As if an ever-present box of KrustyO's on your kitchen shelf wasn't reminder enough that your obsession was soon to grace the big screen? Can we not connect our own dots in whatsoever way we choose to arrange them?

Plastic cutouts of Simpsons characters in Kwik-E-Mart; KrustyO's boxes with extrascenario URLs to make sure you don't miss the point. Similarly, and sadly, a picture of Eternal Sunshine's star Jim Carrey whose unassuming character just happens to be profiled on the memory erasure firm's website. Sigh.

Don't break the universe could be a good starting point, a rule of thumb for scenaric integrity. But whose universe is this? Let's be clear: an artifact from the future (or an imagined parallel present) is in a sort of competition for ontological authority with the consensual "real world" (the one within which you're building a Kwik-E-Mart, or Lacuna website). The difference is, I think, that the supposedly consensual universe was made to be broken (or rather, remade). But designers of artifacts and stories intended to transport us elsewhere -- whether for commercial, entertainment, or more explicitly transformative purposes -- can shatter their own fragile creations all too easily. And from the concerned futuryst's point of view, then, the transformative potential of experiential intensity embedded in these interloper artifacts (these competing realities) is weakened the more they concede.

Well, more on this to come, but tomorrow morning I'll be heading home to Black Rock City for a second time. Plenty of wide open space out there on the playa to facilitate reflection on artifacts from the future, and life's other conundrums.

Hi, Stuart,
I'm Seong Won. Thanks to you, I wrote a greeting here. I hope that you will be the GREAT futurist.
all the best to you.