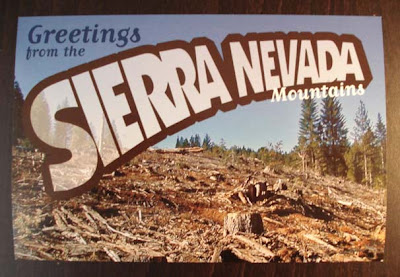 The postcard shown above, distributed by environmental advocacy organisation ForestEthics, presents a depressingly ugly vision of a drastically deforested Sierra Nevada Mountain Range (which lies mostly in California, partly in Nevada). Its irony-heavy play on the customary 2D postcard idyll prompts a double-take, hopefully provoking at least a moment's reflection, like many of the future artifacts discussed here at the sceptical futuryst.

Now, in using an actual photo, this doesn't purport to be a postcard from the future strictly speaking, and yet it is implicitly future-oriented. The organisation aims at "Motivating people to reform corporations; motivating corporations to protect forests". To that end, this flyer in postcard disguise, part of their "Save the Sierra" campaign, deploys a sort of metonymic strategy -- a part stands for the whole -- saying, in effect; "here's what's happening now, and there's more destruction to come". Their website elaborates:

The rich forests are heavily logged by Sierra Pacific Industries (SPI), and the area is marked by clearcuts. SPI is the largest private landowner in California. They’ve already clearcut hundreds of thousand of acres in the Sierra, and they have plans to clearcut over a million more.

We can see here how, in intent as well as appearance, politically motivated future artifacts can fit into a wider spectrum of awareness-raising, conversation-starting efforts. Indeed, as an instance of shock-based visuals in aid of an ecological cause, there's more than a faint resemblance in this postcard to the posters mounted for Berlin's Landwehrkanal tree-felling awareness drive, noted at this blog recently.

The Sierra campaigners, pictured below, seek to mobilise people against the clearcutting of mountain forests (rather than harvesting lumber from a sustainable source) for the homebuilding industry. It would be interesting to know what level of response is generated -- how many folks are moved to sign in support of the forest conservation cause. Although, naturally, it'll be hard to tell how much of that is due to the postcards themselves, and how much to other aspects of the campaign; nifty costumes etc. In any event, the good news is, they did use recycled paper (phew! -- that could have been embarrassing). 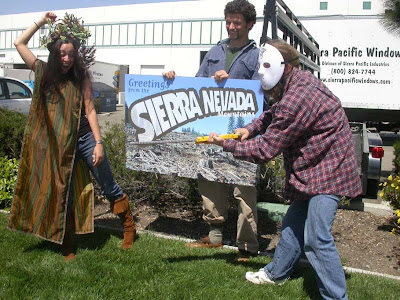