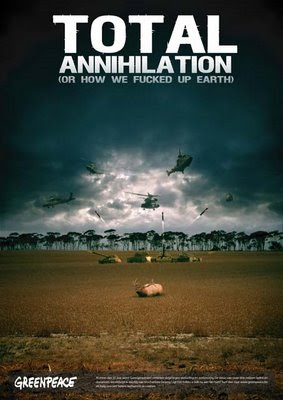 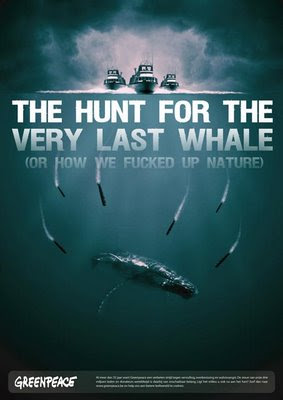 These images were produced by students in the advertising department at Sint-Lukas College [English site] in Brussels in the first term of 02006. Their assignment was create a visual awareness-raising campaign around Greenpeace themes, i.e., environmental activism. Many of the results are quite striking; and some highlights appear here with commentary [in italics] courtesy of Belgian futurist Maya van Leemput, who passed these along (regular readers of t.s.f. have met her before). Thanks, Maya!

Found some futures for the collection.

"John-from-Ghent" is the name of seagull type bird, the obituary states: 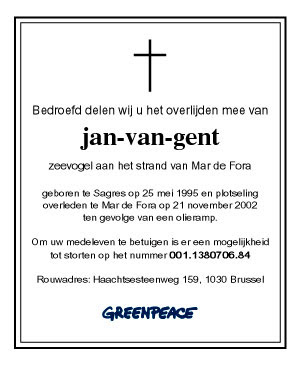 "With great sadness we announce the passing away of john-from-ghent. Seabird at the beach of Mar de Fora. Born in Sagres on May 25 1995 and suddenly deceased in Mar de Fora on November 21st 2002 following an oil spill. To testify your sympathy, you can transfer money to the accountnumber...."
An ordinary residential street in Belgium, prepared for rising sea-levels: 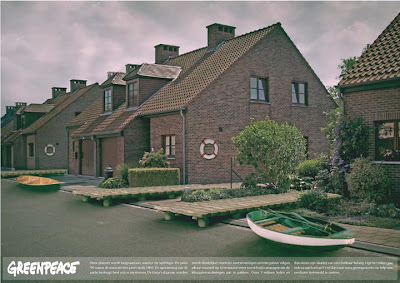 Two signs with the names of small towns in Belgium: 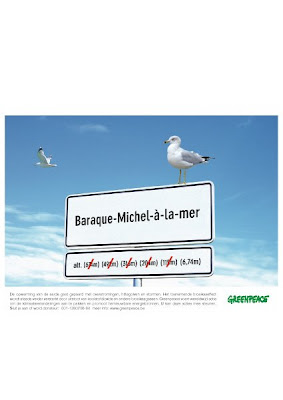 "Baraque Michel" is the highest point in our little low country. 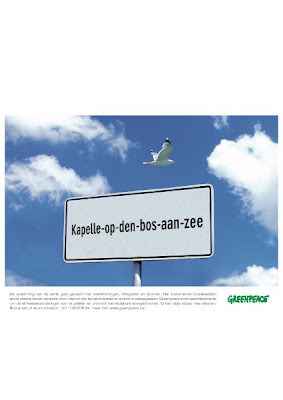 The price of space-suits: 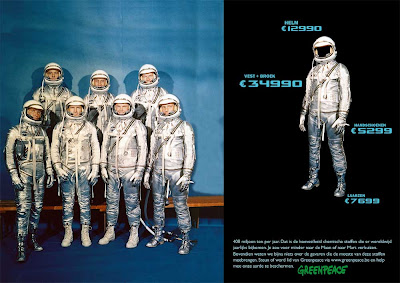 The text below says: "400 million tons a year, that is the amount of chemicals added globally every year. You would move to Mars or the Moon for less."

Most of [these are] just images, except for the first two which count as (film) posters (like a postcard is an object, something other than merely the actual image on its front). The death notice might count as an object also if it was presented and sent in an envelope or printed among the obituaries in the newspaper (which it wasn't). Anyway, some of the other images show objects that in 3-D would count as future artifacts, others just show images of what a future might be like.

The archive from which these images are drawn can be found here (N.B. text in Flemish).

So, a few thoughts. As Maya suggests, none of these function strictly as future artifacts. The "Greenpeace" branding immediately breaks the fourth wall, so to speak, in all these cases, and there is a certain lack of diegetic coherence -- e.g., even were it not for the brand name, the savage irony of the film posters belies their ostensible status as actual posters for future films, so the viewer is deprived of space to make the connection between the supposed artifact and the disturbing conclusion. The dots are, forcibly, joined up for us.

Still, features they could be said to have in common with such artifacts are: futures orientation expressed through an implicit future setting (except the obituary); evocation of some relevant issue or trend; and dissonance in the design (something impossible, unfamiliar, or futuristic that doesn't "fit" today).

The talented artists who produced these, I hasten to acknowledge, were briefed to make a visual campaign, not "artifacts from the future" per se, so lest these comments seem gratuitously critical, my aim is merely to think with these examples (and others of their ilk) about how best to use design to provoke futures thinking. Still, it's interesting, I think, that future artifacts of this sort are not uncommon as a strategy in environmental awareness-raising (compare with these previous examples). Both raising and acting on our awareness are things we need to get very good at -- the sooner, the better.
Posted by Stuart Candy at 2:38 pm

My name is George Moussi and I am writing an Analytical Research Paper for my English 110 class. In it I compare the anti-whaling poster featured in your blog (the second picture on this page) to propaganda seen in World War II. Your post says that the poster was created by students attending Sint-Lukas College in Brussels. I was wondering if you knew whether or not this poster has been displayed in public, and if so, where? Any information you could provide regarding this poster would be helpful, as well as any contact information of the students that created it. Thanks.