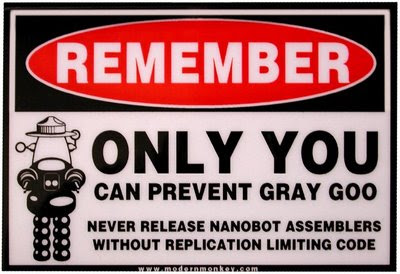 In my inbox this week, a "sign from the future", warning -- with a nod to the long-running Smokey Bear forest-fire public service campaign -- about the dangers of nanotechnology:

REMEMBER: ONLY YOU CAN PREVENT GRAY GOO

(By the way, "gray goo" -- by which they of course mean grey goo -- refers to a staple of nanotech-themed sci-fi; a scenario wherein tiny self-replicating robots basically eat the world, for which the marvellous shorthand is ecophagy.)

Now, this isn't a new design -- I saw it about this time last year over at Open the Future, and it also appeared at BoingBoing back in 02004. Turns out to be the handiwork, produced about a decade earlier, of designer Jim Leftwich (a.k.a. "Ward Parkway"); a continuation of the Urban Absurdist Survival Kit which appeared in The Happy Mutant Handbook (Riverhead Books, 01995). The Kit, according to one of the handbook's editors, Gareth Branwyn, consisted of "original artwork for stickers, coupons, and other signage that can be color photocopied and cut out". Classic culture-jamming.

So, here's another example of what we could regard as proto-future-jamming, posted by Branwyn at his website (undated, but from other dates on the page, probably around December 02001). Again, it's by Leftwich, and plays with the visual vocabulary of health and safety. 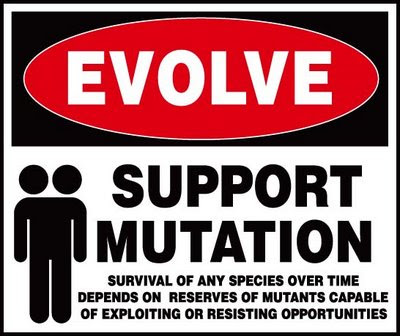